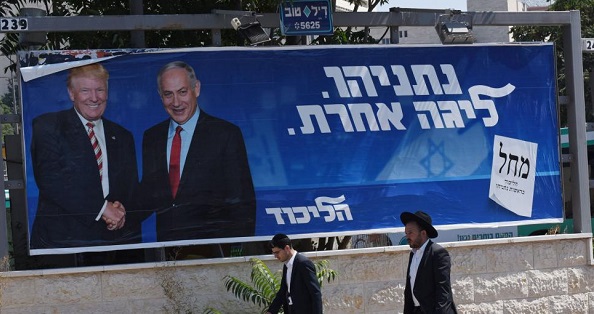 Quote of the day:
"Like a beaten society, we've grown accustomed, accustomed to the idiotic idea of going to the polling stations yet again, because the stars didn't align for Binyamin Netanyahu and Avidgor Liberman in April."
--Yedioth commentator, Chen Artzi-Sror.*
Front Page:
Haaretz
Yedioth Ahronoth
Maariv This Week (Hebrew links only)
Israel Hayom


Top News Summary:
Maariv wrote that  “Trump came to Netanyahu’s rescue.” Yedioth called it Trump’s “election present” to Netanyahu and Haaretz+’s Noa Landau called it a “gift credit.” Only Israel Hayom referred to it as “diplomatic news.” US President Donald Trump's confirmation that he will continue discussing after the elections a “defense alliance” between the US and Israel was mostly seen as part of Netanyahu’s election campaign and it made today’s biggest story in the Hebrew newspapers. It comes in the wake of reports that Netanyahu has been trying to get a diplomatic gesture from Washington. Kahol-Lavan leader Benny Gantz responded saying: "This is not what we want. We have never asked anyone to get killed for us. We have never asked anyone to fight for us. And we have never asked anyone anyone’s permission to defend the State of Israel." Maariv asked whether it was really "a defense alliance or election spin." In an interview on 103FM, former National Security Council chief Giora Island said it was a ”meaningless and void agreement,” adding that “the issue arises in almost every term of government” and that it was an agreement that could do damage.

Interestingly, following Trump’s defense alliance statement ’gift,’ with the exception of Maariv, the papers, lost interest in Netanyahu’s recent announcement of annexation of the Jordan Beqaa Valley if elected. In a full page article, Maariv reported that former US mediator for the Israeli-Palestinian conflict, Amb. Martin Indyk, said that "Netanyahu never claimed that annexation was necessary.” Indyk spoke out after Netanyahu wrote a post against Gantz that he supported withdrawal from the West Bank. Indyk said that “Netanyahu supported General John Allen's security plan,” which did not give Israel sovereignty over the Jordan Beqaa Valley. (Also Times of Israel) On Friday, there was a storm following the report by Maariv's Ben Caspit that a "screaming match" occurred on Tuesday between Netanyahu and senior security leaders, before Netanyahu announced his intention to annex the Jordan Valley after the elections. Netanyahu reportedly spoke with the IDF chief of staff and the Shin Bet head in a conference call in which they criticized him for wanting to announce the annexation of Judea and Samaria and stopped him from implementing immediate annexation. (Also translated for JPost.) Israel Hayom and Haaretz noted that Turkey said it would convene a special meeting of Muslim countries to discuss the pledge, if Netanyahu is re-elected. Haaretz also reported that five major European powers said that the annexation move is illegal according to international law. And Israel's Election Committee considered the declaration illegal electioneering and fined the Likud party $8,500 following Netanyahu’s live broadcast announcement.

Meanwhile, the papers noted that Netanyahu is calling on right-wingers to vote for him and not the Kahanist Otzma Yehudit party, because the four mandates they are projected to get would give Likud fewer mandates than Kahol-Lavan or, alternatively, Otzma Yehudit might not pass the minimum threshold and the votes would 'go to the trash' and Kahol-Lavan would still have more mandates.

Features:
'We Had a Beautiful Life, and It Was Lost': Gaza Women Widowed in the 2014 War Speak Out
On the fifth anniversary of the end of Operation Protective Edge, Olfat al-Kurd, a B'Tselem field researcher in Gaza, visits five women who lost their husbands and other relatives in Israeli bombing. (Gideon Levy, Haaretz+)
'Netanyahu is a rock star:' The evangelicals harvesting land in settlements Israel hopes to annex
Evangelical support for Israel goes back decades, but recent moves by Trump and Netanyahu have strengthened the group, leaving others suspicious of their intentions. (Agency, Haaretz)
Kickbacks, Death Threats and Local Democracy: The Arab Town Crying Out for Good Governance
The authorities say they’re doing everything they can to help the Arab citizens of Kalansua, but desperate locals are having a hard time believing that. (David B. Green, Haaretz+)
He dared and he won: The Wonderful Story of Sammy Nahmias, Founder of Sayeret Matkal (elite commando unit)
He did not celebrate his Bar Mitzvah because of the War of Independence and as a teenager he arranged for a friend to serve in the paratroopers by knocking on Arik Sharon's door. Dr. Uri Milstein reveals conversations with Sami Nahmias. (Dr. Uri Milstein, Maariv)
In Argentina, He's Known as the 'Bone Breaker.' Israel Granted Him Citizenship
Argentine lawyer Federico Schiber allegedly convinced destitute women to be subjected to extreme violence in order to get an insurance payout. He stole their money, was tried for heading a crime ring – and found haven in Israel. (Hilo Glazer, Haaretz+)

Commentary/Analysis:
The Gift That Never Stops Letting Israel Avoid Peace (Carolina Landsmann, Haaretz+) If we examine the Gaza disengagement according to its true goal, we must crown it an overwhelming success of the settler right. A gift that never stops giving. Three weeks before the approval, in an interview with Ari Shavit in Haaretz Magazine, Sharon’s bureau chief Dov Weissglas explained that the pullout was designed to provide legitimacy for freezing the peace process. “The disengagement plan makes it possible for Israel to park conveniently in an interim situation that distances us as far as possible from political pressure. It legitimizes our contention that there is no negotiating with the Palestinians...The disengagement is actually formaldehyde. It supplies the amount of formaldehyde that’s necessary so that there will not be a political process with the Palestinians.” The disengagement was depicted by Sharon’s lawyer as a long-term investment: giving up Gaza in order to keep control of the West Bank. Regarding the large settlement blocs, Weissglas said that “thanks to the disengagement plan, we have in our hands a first-ever American statement that they will be part of Israel. In years to come, perhaps decades, when negotiations will be held between Israel and the Palestinians, the master of the world will pound on the table and say: We stated already 10 years ago that the large blocs are part of Israel.”
It's not hard to go to war in the Gaza Strip, but chances are we will come back with our tail between our legs (Jacky Khougy, Maariv) Israel is approaching with huge steps to the point of no return in Gaza. Almost every possibility of getting out of the mess is blocked. A guide for understanding a national problem.
The Palestinian Economy Is Collapsing. Its Future Depends on Israel (Zvi Bar'el, Haaretz+) The minister of national economy is ambitious and as capable as can be, but when it comes to trade, industry and Palestinian Authority's revenues, he doesn't call the shots.
Why is the BDS movement dangerous? (Tesfazion Gerhelase, Israel Hayom) BDS poses a threat to Israel not because it is causing Israel political or financial damage but because it is shifting the opinions of the next generation of American and European leaders.
Erdogan has an army of Syrian refugees, and he's not afraid to use it (Zvi Bar'el, Haaretz+) Turkey's threat to flood Europe with refugees is meant to pressure the U.S. to allow Turkey to establish a safe zone in Kurdish-controlled northern Syria.
Israel may not be behind the espionage case in the US, but if it is, then it’s an earthquake (Yossi Melman, Maariv) For decades, the state has not been spying on US territory following the discovery of spy Jonathan Pollard in the 1980s, and it is hard to believe that this directive has been violated in the present case.
Israel and John Bolton’s departure (Caroline B. Glick, Israel Hayom) The fact that Netanyahu announced his annexation plan just as Bolton was departing suggests the administration’s positions on Israel are unlikely to change now that one of its allies is gone.


Interviews:
PM defends Trump-touted defense deal, won't rule out Arab ministers
In an exclusive interview with Ynet, Netanyahu says those who claim the potential U.S.-Israel defense treaty wouldn't be financially viable 'don't know what they're taking about'; adds he'd sit with Arab ministers in his government as long as they're not Ahmad Tibi or Ayman Odeh. (Interviewed by Moran Azulay Ynet)