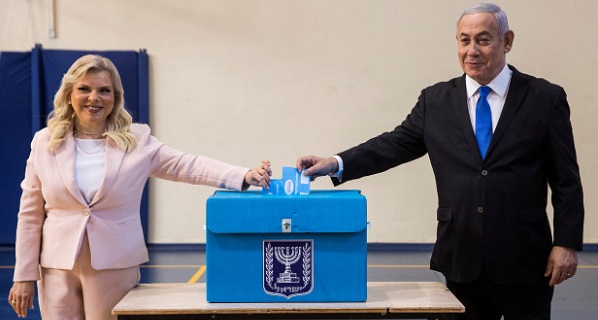 Quote of the day #1:
"I suggest you make an exit now. This is the 90th minute. Your hourglass is almost out. These are the last moments where (Attorney General) Mendelblitt can make you a reasonable deal. If you don't do it now, you are taking a big gamble. Remember Olmert. He, too, thought it would not happen to him, but he went to Maasiyahu (prison). Do you want to go to Maasiyahu, Bibi? Sure, you'll have some quiet there, finally. I understand. But I don't think you’ll like the scent of Lysol or the kitchen duties. There is no sushi there, and the pasta isn’t great."
--Maariv's political commentator, Ben Caspit, writes what he thinks Israeli Prime Minister Binyamin Netanyahu's deceased personal lawyer and friend would have advised Netanyahu following his election loss and the upcoming hearing on his corruption cases.*
Quote of the day #2:
"The racism of the politicians kills us - we learned to live together, Arabs and Jews."
--Aida Husari, 52, from Shfaram town, who donated her kidney to a Jewish man. The Jewish man's original donor donated to Husari's sister-in-law.*


Top News Summary:
Today’s Hebrew stories marveled over the deadlock of the Israeli political system, now that neither of the major blocs, right-wing-ultra-Orthodox or center-left, got enough for a majority without the help of right-wing-secular-ultra-nationalist Avigdor Lieberman and his Yisrael Beiteinu party. And Lieberman has reiterated that he will only sit in a unity government of both Kahol-Lavan and Likud. The papers also noted that US President Donald Trump didn’t call his good friend, Israeli Prime Minister Binyamin Netanyahu, after the elections and that the mostly-Arab ‘Joint List’ marked a great achievement, raising voter turnout among Arab citizens by 12%.

On Wednesday, Netanyahu announced the formation of a bloc of the ultra-Orthodox and right-wing parties, sans Yisrael Beiteinu, to thwart Kahol-Lavan leader, Benny Gantz from making a coalition bid first. He declared that Israelis had two choices, a government led by him or a “dangerous government that depends on the support of the Arab parties.”

In order to focus on coalition negotiations, Netanyahu cancelled his participation at the UN General Assembly next week and his meeting with Trump. Foreign Minister Yisrael Katz will fly to New York on Netanyahu’s behalf, marking the first time since 2010 that Netanyahu is not speaking at the event. In what sounded like a slight against Netanyahu, Trump said that he had not spoken with Netanyahu and that “our relationship is with Israel.” Trump’s comments came on the day he named former hostage negotiator Robert O’Brien as his national security adviser, replacing the ousted Iran-hawk and close friend of Israel, John Bolton. Meanwhile, US Mideast envoy, Jason Greenblatt will visit Israel today and meet with both Benny Gantz and Netanyahu to discuss the optimal time to release the Trump peace plan. This will be the first time US officials meet Gantz as they refused his requests in the past after he became head of the Opposition.

Yedioth Hebrew reported that Netanyahu can forget the immunity from being put on trial that he wanted. “Netanyahu planned to win the election, enact the Immunity Law that would prevent him from being prosecuted, pass the High Court Override Law that would prevent the High Court from repealing the law, and then make changes to the top echelons of the justice system,” wrote Moran Azulay and Tova Zimuki. “The current Knesset composition will cause these programs to be shelved.

A full-page article in Yedioth Hebrew, titled, ‘The Joint Success,’ described how the Netanyahu’s and the Likud party’s incitement against Arabs backfired and was a major factor in the sharp rise in voter turnout in the Arab sector, which gave the Joint List at least 12 seats in the Knesset. The Joint List is made up of four Arab parties and its leaders see their 12 seats as a chance to "send that inciter Netanyahu home." Joint List Chairman, Ayman Odeh, gives his party credit: “Without (the high Arab turnout), Netanyahu would have been the prime minister." The papers discussed whether Odeh would become the first Arab citizen to be the head of the Opposition, if the two large parties form a unity government. Yedioth wrote that the position is considered one of the seven government symbols in the country and, by law, requires Shin Bet security for him as well as for him to receive security briefings from the prime minister. Odeh said his party could use its unprecedented success as an opportunity to draw world attention to the injustices done to Israeli Arabs. ”It is a very influential and unprecedented role for the Arab citizens," Odeh said. "The leader of the opposition has an important pulpit from which to inform the world" about the controversial Jewish Nation-State Law passed by Netanyahu's outgoing government and and about the unrecognized villages. MK Ahmed Tibi chilled his enthusiasm. “This possibility is wishful thinking. It won’t happen,” he said. “The Zionist parties won’t let it.” Likud MK Miki Zohar said the Likud battle to get cameras installed at polling stations in Arab areas "may have had the undesired effect" of encouraging larger turnout among Arab voters. It was largely considered as an attempt to frighten Arabs from the polls. Haaretz reported that experts say that the Arab voters deprived Netanyahu of his victory by giving one or possibly two seats to Gantz’s Kahol-Lavan.


Features:
***Showing contrition - Morality of the kidneys [play on words in Hebrew - OH]
Yisrael and Hanan, a Jewish man and an Arab woman who both needed a kidney transplant, waited for years for the long-awaited surgery.  When kidneys were finally found, they turned out to be unsuitable for them. With the help of a chain of transplants, which also united between Jews and Arabs, donors were found for them and their lives were saved. "The racism of the politicians kills - Jews and Arabs can live together," they concluded. Tensions between Arabs and Jews in Israel were at the heart of the election campaign that ended yesterday. From the turmoil surrounding the proposal to place cameras at polling stations in the Arab communities, through attempts by some parties to intimidate high voter turnout rates in the Arab sector, to text messages that included incitement and attempts to cause a rift between the Jewish and Arab sectors. But while politicians fought - the citizens prove another way is possible. Twenty-four hours before the dramatic moment moment when the polls opened, two Jewish men and two Arab women faced their own dramatic moment: a chain of operations that saved the lives of two of them. Ido from the religious community of Hoshaya intended to donate a kidney altruistically to Yisrael Belban, 35, from Kiryat Bialik, whom he did not know before, but, unfortunately tests found he was not unsuitable. The same happened to Aida Husari, 52, from Shfaram town, who intended to donate a kidney to her sister-in-law Hanan Hamada, but the results of the tests showed that this would not be possible. At Rambam Hospital, the four proposed a "chain of transplants,” which led to Aida donating her kidney to Yisrael, while Ido donated a kidney to Hanan. Aida: “I got a genetic test and told me that the kidney was not right for her. They asked us at the hospital if I were willing to donate the kidney to someone else and maybe, as a result, he can donate his kidney to my sister. I replied, ‘If we save two people's lives, I have no problem donating the kidney to him.’” It took surgeon Dr. Ahmed Asalia and vascular surgeon Dr. Tony Karam 12 hours to perform the transplant operations. The crossover was indeed successful, and this week the donors and recipients met. "I met Aida in the hospital, thanked her and bought her a gift and chocolates," Yisrael said excitedly. Aida added: "I am very happy that I saved the lives of two people. The racism of the politicians kills us - we learned to live together, Arabs and Jews. Every Saturday we meet with our Jewish friends and we have no hatred for anyone - we grow up together and it will stay that way all our lives,” she said. Rabbi Yeshayahu Haber, chairman of the Matat Haim Association, which has been responsible for hundreds of transplants in recent years, welcomed the special transplant: “This transplant is a wonderful unification of the parts of the people, who connected in such a moving and uplifting way: Jews and Muslims, religious and secular, women and men. That is the beauty of the gift of life, and I hope we will continue to connect and unite the people through altruistic life-saving acts.” (Inbar Twizer, Yedioth Hebrew)

Feminism, Nakba and Tears: This Young Palestinian Artist's Works Are Hard to Look Away From
Womanhood and national identity politics are at the heart of the drawings of artist Samah Shihadi, now on display at her solo Tel Aviv Museum exhibition. (Vered Lee, Haaretz+)