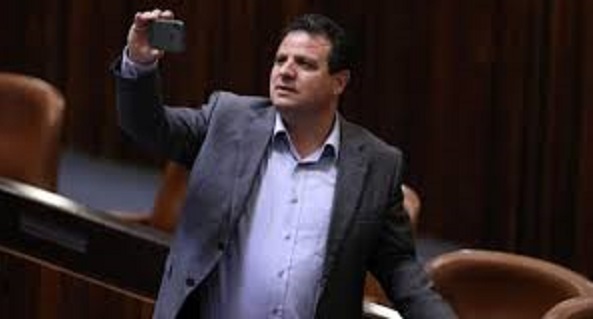 Quote of the day:
"We must recover from the fantasy of subtracting the ultra-Orthodox and/or Arabs from Israel, and replace it with a vision of partnership. This isn’t idealism, it’s realpolitik. The only way to get out of the political dead end is to break the dichotomy at its foundation. If the right says no to the Arabs and the left says no to the Haredim, Gantz must say yes to both of them."
--Haaretz+ commentator Carolina Landsmann on forming a government.*
Front Page:
Haaretz
Yedioth Ahronoth
Maariv This Week (Hebrew links only)
Israel Hayom

Top News Summary:
Alongside the beginning of the parties’ march to the President to make their recommendation of who should be given the mandate to form a government, there were two other main stories in today’s Hebrew newspapers: the murders of four people in the Arab sector in one day over the weekend and (another) gang-raping of a young girl by other school children - this time over 10 days.

The big question was whether the Joint List would recommend Kahol-Lavan leader Benny Gantz to try to form a coalition government. Yedioth (Hebrew) wrote that “The Joint List dropped a bomb last night when party officials announced their intention to recommend Gantz to assemble the government today.” It would be a “historic decision. Yedioth noted that “there are no free gifts and the dramatic move likely will have to be compensated.” The papers reported that the compensation will be the repealing of the law imposing punishment for illegal construction. The Joint List is made up of four mostly-Arab parties, which jointly ran and won 13 seats in the Knesset, making it the third largest list. Traditionally the Arab parties do not recommend anyone to form the government. The list members met Saturday night to discuss the issue, but failed to come to a decision. Unlike the List leader, Ayman Odeh, Balad leader Jamal Zahalka opposed recommending Gantz as Prime Minister, due to Gantz’s right-wing views, his willingness to enter a unity government with the Likud party, and his reluctance to commit to annulling the Jewish Nation-State law and the "Kaminitz Law" against illegal construction, he said. Meanwhile, election kingmaker Avigdor Lieberman said the ultra-Orthodox parties had a change of tune, approaching him in a more conciliatory spirit.

Also, ahead of Israeli Prime Minister Binyamin Netanyahu’s hearing on alleged corruption, Yedioth’s Tova Tzimuki writes that senior sources in the judicial system completely deny the possibility of a plea bargain with the prime minister. "The initiatives to give a pardon or make a plea bargain exist only on Twitter and in the minds of several commentators,” they said. And, Netanyahu insists he will not sign a plea bargain. (Hebrew) And the rumors swirling on election night about a group of Likud MKs preparing a rebellion against the prime minister have not come to fruition, as none of the potential heirs have shown any willingness to stand up to Netanyahu.

Features:
Arrest a Palestinian for Two Days and Release Him. This Is How the Israeli Army Does It
Hassan Nafe’a was simply filming the weekly demonstrations against the separation barrier. How is that incitement? (Amira Hass, Haaretz+)
Gideon Levy Down in the Jordan Valley, the Cruel Wheels of the Israeli Occupation Keep on Turning
Shortly after Netanyahu announced his plan to annex the Jordan Valley, the Israeli authorities arrived at hilltop olive groves owned by Palestinians there, and destroyed them, days before the planned harvest. (Gideon Levy, Haaretz+)
Empowering the Entrepreneurial Ecosystem in the West Bank
The main obstacle faced by Palestinian entrepreneurs was the lack of networking opportunities and that through this 3E conference, international companies and Palestinians gained access to one another. (The Media Line, Ynet)
An anti-Zionist Movement That Promoted Judaism as a Secular Culture Shuts Its Doors
They believed in a just society and wanted to teach Palestinians Yiddish. The Bund’s center in Israel closes, marking the end of a movement that offered a radical alternative to mainstream Zionism. (Shany Littman, Haaretz+)
Resource: Tracking Israel's support for illegal outposts
The Israeli government has been quietly authorizing illegal settlement outposts in recent years. A criminal activity, the trend also exposes Palestinians to increased violence and harassment from settlers. (Rachel Shenhav-Goldberg, +972mag)
'This Is Where Netanyahu Got Us To': The Israeli Leftists Who Cast Their Ballot for Lieberman
Hawkish Yisrael Beiteinu leader gained eight seats in Tuesday's vote, with many center-left voters voting for him despite his questionable past and belligerent policies. ( Shira Kadari-Ovadia, Haaretz+)
Forgotten Heroes in the IDF: The story of the Bedouin trakker who commanded the Shaked patrol
Amos Yarkoni, who is the acclaimed Bedouin officer Abd al-Majid Khader al-Mazarib, planted in the IDF already 64 years ago the prevention doctrine, which allowed the IDF a few years of silence. (Dr. Uri Milstein, Maariv)
Corruption warriors: Investigative journalists on the rise in Arab world
In a region where abuses of power are rife, investigative journalism is viewed as an important tool to combat corruption and to motivate governments and businesses to act in the interest of the public, and the number of exposes is increasing steadily. (The Media Line, Ynet)

Other Commentary/Analysis:
An Israeli Problem (Haaretz Editorial) This weekend’s murders raised the number of Arab homicides since the start of the year to 63. This is a frightening statistic by any standard, which should require the country’s decision makers to adopt special measures and draft a strategic plan to combat violence in Arab society. The Public Security Ministry and the police say they are attentive to this need and even display statistics showing that hundreds of guns have been confiscated in Arab towns. But in practice, the violence is increasing, and organized crime rings are running out of control, with no one to stop them or even make them think twice. This is another reason why it’s urgent to replace the Netanyahu government. We must hope Netanyahu’s replacement will offer a better solution to this problem.
The murders in the Arab sector: The police distinguish between blood and blood (Taleb A-Sana, Maariv) When the victim is a Jew, the police classify it as a nationalist crime, so it mobilizes all means, including the Shin Bet, which comes into the picture. Not so when the victim is an Arab.
Israel Takes Tactical Risk in Gaza to Serve a Strategic Goal (Amos Harel, Haaretz+) Israel seeks quiet on the Gaza front so it can focus on the Iranian threat ■ Outgoing Israeli army spokesman gets a special farewell gift.
Iran’s rulers attack and threaten (Clifford D. May, Israel Hayom) If John Bolton still had the president’s ear, he’d counsel against appeasement.
As Islamophobia Is Embraced Worldwide, Israel Allows Itself to Let Loose (Ofri Ilany, Haaretz+) The world no longer cares about the Palestinian plight, and hatred for Arabs has become the new consensus.
The U.S. Has an Excuse to Go to War With Iran. It Just Doesn't Want To (Zvi Bar'el, Haaretz+) Trump’s response shows that he doesn’t consider the attack on Saudi oil assets a direct threat on American interests. But a lack of response risks putting Washington and its allies in a bind .
The Egyptian army is making a fortune in Sinai (Zvi Bar'el, Haaretz+) Cairo sees investment in the peninsula as an investment in national security, but the military receives tax and other benefits that crowd out the private sector.

Interviews:
'Modi Is Provoking Pakistan and China, and There's High Potential for Conflict'
India is undergoing tremendous upheaval today, says political scientist Ayelet Harel-Shalev. Along with the rising nationalism and intercommunal friction, the specter looms of a confrontation with Pakistan and its ally China. (Interviewed by Ayelett Shani in Haaretz+)

Israel is an 'important country and a good friend of India'
Sujan R. Chinoy, a leading Indian scholar, visited Israel under the auspices of the Jerusalem Institute for Strategy and Security. He says he is optimistic about India’s relationship with Israel: "It is greater than any temporary political climate." (Interviewed by Ariel Kahana in Israel Hayom)

Israeli, American Left 'criminalizing politics'
In interview with JNS, conservative radio personality, author Mark Levin says the Left "is always looking for a way to walk away with a piece of paper and peace in our time. You know what? Sometimes, you don't get peace in our time because sometimes, there are really bad people running countries that want to do really bad things." (Interviewed by Alex Traiman in Israel Hayom)

New York’s New anti-Semitism Czar Warns: No Short Fix for the Longest Hatred
Deborah Lauter tells Haaretz about the challenges facing her as the city's Jewish community experiences a wave of hate crimes. (Interviewed by Danielle Ziri in Haaretz+)