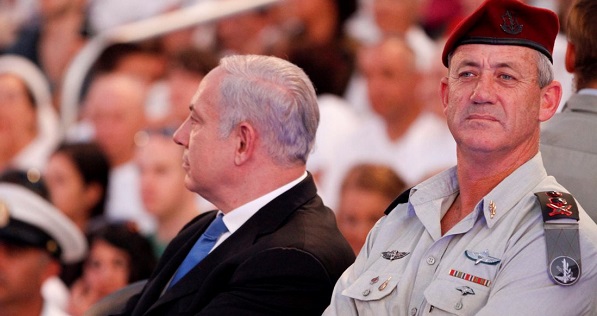 Quotes of the day:
“The endorsement by the Joint Arab List of a Zionist party to form a government in Israel is a historic, formative and exciting event. Nothing less.”
—Maariv’s top (and conservative) political commentator, Ben Caspit, on the recommendation by the Arab Joint List for Benny Gantz to form the next government.*

"Of all the parties that came to the President yesterday, representatives of the Joint List were the most practical and restrained. The demands they made were reasonable: war on crime and homicides, ending demolition of houses, repealing laws that discriminate against their constituents. Netanyahu's response came quickly: The traitor Gantz conspired with the Arabs to destroy us.”
—Yedioth’s top political commentator, Nahum Barnea, on the recommendation by the Arab Joint List for Benny Gantz to form the next government.**
Front Page:
Haaretz
Yedioth Ahronoth
Maariv This Week (Hebrew links only)
Israel Hayom


Elections 2019:
The big news in today’s Hebrew papers was the “historic” recommendation by the Joint List to endorse Kahol-Lavan leader Benny Gantz to form the coalition government.  The top political commentators of Yedioth and Maariv, Nahum Barnea and Ben Caspit, respectively, wrote about it on page one, seeing it as a new hope for the country and an answer to the incitement by Israeli Prime Minister Binyamin Netanyahu and his “Revolutionary Guards” during his rule. (See Commentary/Analysis below.) The recommendation was the first in almost 30 years by the Arab parties in Knesset, happening last when they put their support behind the late Yitzhak Rabin. However, because the three Balad party members of the Joint List did not attend the meeting with the President and said they are not part of the Joint List’s decision, it was thought that the President would not take their three seats into account, giving Gantz 54 recommendations compared to Netanyahu’s 55. he papers reported that Kahol-Lavan did not want to have the first attempt to form a coalition, thinking that it would have a better chance if Netanyahu tried first and failed, after which Likud MKs would demand Netanyahu step down as head of the party. (Also, Maariv and Yedioth Hebrew.)  Sources in the Joint List said that their demands in making the recommendation were to deal with the high crime rates in the Arab sector and repeal the Jewish Nation State law and the law against illegal construction. It was not clear whether they received any commitments or not. After the Joint List recommendation, Netanyahu attacked the Arab parties in a social media video saying: "It happened just as we warned. Now there are two options: either a minority government that relies on those who reject Israel as a Jewish and democratic state or a broad national government." Meanwhile, a poll found that most of the Arab citizens of Israel support the Arab parties joining the government, however, they don’t agree (77%) that Israel has a right to define itself as the nation state of the Jews. The poll also found that the majority of Arab citizens of Israel, 65%, are proud to be Israeli. (Maariv)

Yedioth Hebrew’s legal affairs correspondent, Tova Tzimuki, reported on Netanyahu's legal situation. Sources in the President’s Office turned to the Judiciary over the weekend to see if Netanyahu's current legal status, about a week and a half before the hearing, would allow him to form a government. Despite the legal challenge, Attorney General Avichai Mendelblitt’s associates responded that there was nothing to prevent it - at this point in time. The petition was made against the backdrop of Yedioth Ahronoth's publication last week, which states that if it is decided to indict Netanyahu after a hearing, he may be barred from declaring a third election campaign or forming a government. According to news reports last night, officials from the president's office contacted the Attorney General’s office informally, without requesting an opinion and without the president's involvement. Sources close to Netanyahu have argued that according to the Basic Law: The government states that the term of office of a prime minister will be terminated only after conviction in a final verdict, and therefore the "Deri-Pinchasi” ruling, according to which a minister who was indicted will be dismissed, cannot be applied. This is a complex and debatable legal issue, but if the President entrusts Netanyahu with the task of assembling the new government, then according to the law it will be done under Netanyahu's "hat" as a Knesset member and not as prime minister, so the legal rules are different. In other words, just as no one can be appointed to office when that person has been indicted for crimes that consist of moral integrity, there is reason to argue that the president's discretion in imposing the job of forming a government on Netanyahu - while according to law he is defined as an MK - will be limited following a decision to indict him, particularly for corruption charges. In any case, at this stage, the Office of the President received the response that despite the legal scenarios, there is no legal prohibition on the matter. The prime minister's hearing is set for October 2, and the assessment is that the decision to indict will be made in November.

Commentary/Analysis:
Court-approved License to Incite (Odeh Bisharat, Haaretz+) Five days and counting after the election, the term “electoral fraud” has already disappeared from the Israeli lexicon, together with the sentence “The Arabs stole the election.” From such a short distance the events of the week before the election seem like a shocking episode that happened in the dark days of history. Go explain to future generations that in September 2019 Israel faced a new governmental order: Private right-wing militias, armed with cameras, were about to monitor the election. It’s chilling…I expected that after Melcer discovered that it was all a story and the “theft Arabs did not in fact steal the election, he would make a dramatic announcement that would shake the country to its foundations: Honorable Prime Minister, you are lying. You are putting the lives of some 2 million people in danger and I will not allow you to persist in this terrible act. Really, Justice Melcer, what legitimate realm of free speech can suffer lies and incitement against the Arabs? This is not free speech, it’s freedom to incite, which was permitted, unfortunately, on account of your refusal to prohibit the fake news in real time, while it was happening.
David Flung His Words at Goliath (Amira Hass, Haaretz+) The Gaza-born Dutch citizen, who submitted a civil suit against Benny Gantz and Amir Eshel for the death of six family members in 2014, invoked the biblical story before the court himself. Ziada told the judges that two Dutch jurists had worked hard to persuade him to file the suit: his wife, the diplomat Angélique Eijpe, and her great-uncle, Henk Zanoli. Zanoli was awarded the title Righteous Among the Nations by Yad Vashem because he, together with his mother, saved a Jewish boy during the Nazi occupation of the Netherlands. In 2014 he returned his medal to Yad Vashem to protest the killing of Ziada’s family. As a result, the family was spared the international oblivion and anonymity that surrounds the hundreds of other Palestinian families that Israel erased when it bombed and shelled their homes in the refugee camps and the cities while they ate dinner and while they slept in their beds at night or gathered in the afternoon in the coolest room. “While my wife and her great-uncle ... [have] faith in legal recourse in the Netherlands, I had a different lived experience concerning the application and the merits of law, Ziada told the court. Meaning: The life of any Palestinian prove to him or her every minute that he and she cannot expect justice from the Israeli legal system. After a full day of deliberations, from 9:30 A.M. to 4:30 P.M., the judges announced that their next open hearing on the case will be in January 2020. They will deliver their ruling as to whether the Dutch court has jurisdiction to hear a civil suit over the killing, on January 20, 2014, of Muftia Ziada, 70, born in the village of Faluja and a refugee living in the Bureij refugee camp, her sons Jamil, Omar and Yousif, her grandson Shaban and her daughter-in-law Bayan.
Prepared for APN by Orly Halpern, independent freelance journalist based in Jerusalem.
comments powered by Disqus