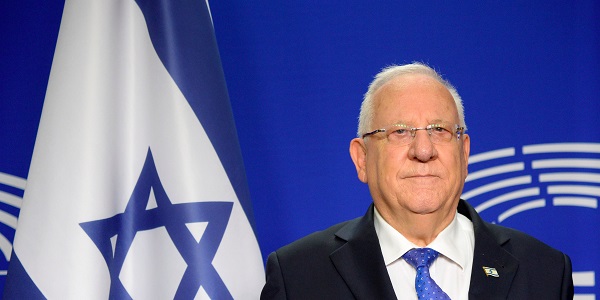 Numbers of the day:
From 20% of the population, i.e. the Arab sector, are 60% of the murder victims from violent crime in Israel.**

Elections 2019 Round Two:
Israel’s President Reuven Rivlin is stalling on the decision over who will form the next government, while different politicians declare opposing conditions - making it only more difficult. The two negotiation teams representing Likud and Kahol-Lavan met a day Tuesday. But Kahol-Lavan co-leader Yair Lapid refuses to sit in a unity government with Binyamin Netanyahu as the head of the Likud. Yedioth Hebrew reported that the Likud does not rule out the possibility that Gantz would be prime minister. Moreover, ‘Israel Hayom’ reported that Kahol-Lavan negotiators were ordered to 'drag out' talks until Netanyahu’s hearing with the Attorney General who needs to decide whether to indict the Prime Minister, after which Kahol-Lavan will better know how to move forward. But in closed talks, President Rivlin said, “I won't let Netanyahu and Gantz drag their feet.” (Yedioth Hebrew) Interestingly, a senior rabbi affiliated with the Mizrachi ultra-Orthodox right-wing Shas called on his party leaders “to enter a government led by Gantz.” Rabbi Zion Bouaron, a retired judge from the rabbinical court, said he is convinced that the party must support a coalition led by Gantz: "The attitude to Shabbat and religion will be infinitely more positive than it is today.” (Yedioth Hebrew) Meanwhile, Yisrael Beiteinu Chairman and elections kingmaker, Avigdor Lieberman, insists he will only sit in a unity government of his party, Kahol-Lavan and Likud: “I will not sit with the ultra-Orthodox, the Messianists, the Joint List and the Democratic Camp,” he said. (Maariv and Actualic Hebrew) Trump administration officials have said they are frustrated with the political stalemate in Israel because it is leading to a significant and unique missed opportunity from Israel's perspective, which is provided by the Trump presidency. Interestingly, an Arab MK accidentally revealed that Netanyahu made overtures to the predominantly Arab Joint List. Believing he was speaking to Netanyahu during a prank call by radio station, Abd Al-Hakeem Haj Yahya confirmed that Likud reached out to his party after the April elections for assistance in legislation to dissolve Knesset and to hold a second round of elections.


Other Top News and Diplomacy:
The other big story was the strike following mass layoffs in cellular phone companies. And in diplomacy at the UN General Assembly, US President Donald Trump said there is a growing recognition in the Middle East that Muslim countries must battle extremism and normalize relations between Israel and its neighbors. Possibly confirming that point, Israel’s Foreign Minister Yisrael Katz said he met with a foreign minister of an Arab country with which Israel does not have relations. Katz wrote on Twitter: "A fascinating first meeting. We discussed in depth the regional realities and ways to deal with the Iranian threat, while at the same time concluding a process for promoting civil cooperation between the two countries.” Katz is expected to make a speech on Thursday at the UN rally in place of Prime Minister Benjamin Netanyahu, who canceled the trip. (Ynet Hebrew) And ahead of his trip to the UN General Assembly in New York, Jordan’s King Abdullah said that if Israel annexes the West Bank it will create an apartheid system and harm Israel’s ties with Jordan and Egypt.

Features:
At This Surreal Event, Sara Netanyahu Was Only the Sidekick
With lyrics such as 'To ascend from the bottom / From the garbage that I came from / To reach the sky / Glitter between my thighs,' and the presence of Israeli PM's wife, socialite Nicol Raidman launched her singing career in an incredible show of Israeli ostentatiousness. (Avi Pitchon, Haaretz+PHOTOS+VIDEO and Ynet Hebrew+VIDEO)
The Woman Who Fell in Love With France’s First Jewish Prime Minister
Jeanne Levylier was smitten with Léon Blum when she was 16 and he was 43. Little did they know they would survive Buchenwald together – as seen in a film to be shown at the Haifa film festival. (Gaby Levin, Haaretz+)

Elections 2019 Commentary/Analysis:
Why the Arabs Are Finally Mingling at Israel’s Political Party (David B. Green, Haaretz+)  For years, Arab politicians were shunned by Zionist parties — and vice versa. In the space of five short months, that has all changed.
To the Palestinians, Gantz and Netanyahu are Coke and Pepsi (Elior Levy, Yedioth/Ynet) Palestinians say unity government would not change much with respect to them as both party leaders agree on key issues, such as annexing Jordan Valley; Palestinian PM compares the two Israeli leaders to choice between rival soft drinks.
History and hysteria: The discussions for a political connection between Jews and Arabs (Ran Edelist, Maariv) Indeed history. The connection between Jewish and Arab politics, as depicted in the preparations for the formation of the government, is a true national drama, regardless of the results of the government. Another historic issue is the disappearance of deal-making settlers from the media radar. After the first round of elections in April, internal discussions took place and (Kahol-Lavan) established several dozen branches in the Arab sector. Gantz had conversations with Ayman Odeh and Ahmed Tibi and was interviewed on an online Arab channel. Netanyahu attacked Gantz, Gantz firmly retaliated, and it seems not only for electoral purposes, but also as a human, in the face of the "only Bibi" camp that ran a campaign of racism and intimidation along the lines of the Klux Klan. That additional step for legitimizing Israeli Arabs, which was carried out by the Blue and White Party, is a welcome move on the path to full civil partnership, and in fact to sanity.
Even if the Settlers' Party Lost, the Settlements Won (Amira Hass, Haaretz+) I wish I could, like Gideon Levy, see the low number of Knesset seats won by Yamina as a defeat for the settlers (“The mouse that roared,” September 22). I wish I could share his view of the settlements as a project of the settlers, who are concentrated in this party. I wish I could see them as a minority that craftily created this monster, and is responsible for the “most pernicious, destructive project in the history of the state.” But unfortunately, the settlers are the product, not the creator, of a pernicious policy. It’s the state that holds the copyright on the settlement project.
Our sacred status quo is the hatred of the other, which creeps like a snake at the foot of the ladder (Prof. Arieh Eldad, Maariv) The ladder for the solution of the political entanglement exists. It is not complicated, but in the meantime it is not used and anyone who can and must get off the tree avoids doing so out of fear of the bad guys.
Israel’s Arab MKs Don't Expect Gantz to Become a Palestinian-lover. Just Not a Netanyahu-clone (Muhammad Shehada, Haaretz+) The Joint List's Arab MKs who endorsed a former IDF chief - accused of war crimes against fellow Palestinians - for prime minister are risking everything to oust Netanyahu. Now Gantz must reciprocate.
Netanyahu and Trump are no longer bosom buddies (Orly Azulay, Yedioth/Ynet) Israel's prime minister gambled on his relationship with the American president, but when he found himself in need of a friendly gesture after last week's elections, the leader of the free world was nowhere to be found.
Next Prime Minister Could Be Gantz, Netanyahu – or John Doe (Chemi Shalev, Haaretz+) The expected failure of national unity talks and the inability of both candidates to form a majority could yield a dark horse prime minister that no one expects.
A unity government is possible without Lieberman (Sofi Ron-Moria, Israel Hayom) No prime minister can trust the Yisrael Beytenu leader. Netanyahu was burned by him in April, and Gantz, who has yet to undergo this baptism of fire, will also likely prefer to surround himself with more reliable and less capricious partners.
Israel's Labor Party, a Shadow of Its Former Self (Moshe Ben-Atar, Haaretz+) The Labor Party nearly disappeared in Tuesday’s election. The departure of politicians such as Stav Shaffir, Shelly Yacimovich and Eitan Cabel, Isaac Herzog, Erel Margalit and Manuel Trajtenberg before them, led to its effective dissolution. The party that established the state and the Labor movement that built the nation nearly left the national stage. It failed to regain its place in the new Israeli history and did not remake itself. As a result, its glorious victories of the past became its errors of the future.


Commentary/Analysis:
France’s enthusiasm for Iran is transparent and dangerous (Freddy Eytan, Israel Hayom) Motivated primarily by its own commercial interests, France ignores the words and actions of the Revolutionary Guard and blindly trusts Tehran’s “moderate” leadership.
How Israel achieved the impossible at the UN (Ambassador Danny Danon, Israel Hayom) The time when the UN was home turf for those who hate and slander Israel is over. We are fighting what might be the most justified battle in the history of the organization.
Prepared for APN by Orly Halpern, independent freelance journalist based in Jerusalem.
comments powered by Disqus