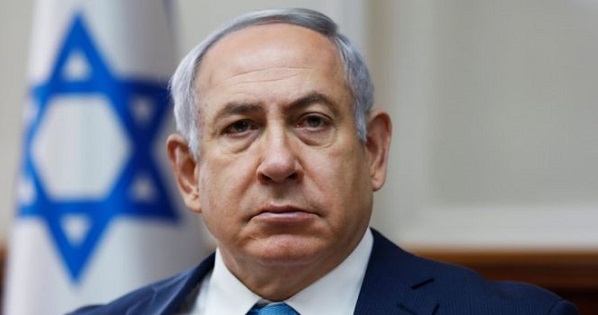 NOTE: News Nosh will be off for the Jewish Holiday and back Wednesday, October 2nd. Happy 5780!

Quote of the day:
"If anyone thought that responsibility and the good of the state would come first, and that Netanyahu would agree to step off the stage and let his party members, if not the residents of his country - return to normalcy, and go on with their lives, then that person has never seen a wounded animal."
--Yedioth's senior political commentator, Sima Kadmon, examines Prime Minister Binyamin Netanyahu's words and actions yesterday upon receiving the mandate to form a government.*
You Must Be Kidding #1:
"We have been through a tough election campaign on all sides and for all sides. We need to unite the nation, to heal the rifts because we are facing three huge challenges."
--Israeli Prime Minister Binyamin Netanyahu, who led incitement against Arabs, left-wingers and the media, in his election campaign, called to heal the rift.***

You Must Be Kidding #2:
Israeli Judge Miriam Kaslassy ordered the eviction Friday of the 18-member Sumreen family, who have been fighting for 30 years against the attempts by the Jewish National Fund to take ownership of their home, backed by the far-right settler group Elad. Judge Kaslassy accepted the JNF’s claim of ownership on the basis that two of the heirs of one of the family's deceased ancestors live in an ‘enemy country,’ and by Israeli law that gives Israel the right to take the home.**
Front Page:
Haaretz
Yedioth Ahronoth
Maariv This Week (Hebrew links only)


Elections 2019 Top Story:
After talks for a unity government fell apart, President Reuven Rivlin gave Prime Minister Binyamin Netanyahu the mandate to try to form a coalition government, while prospects of him succeeding are small and talk of a third round of elections is louder, making the top story in today’s Hebrew newspapers. Both parties pinned the blame for the failure of unity government talks on the other side.

***The Israeli commentators were particularly incensed by Netanyahu’s speech at the President’s Residence upon receiving the mandate: ”We have been through a tough election campaign on all sides and for all sides," he said. "We need to unite the nation, to heal the rifts because we are facing three huge challenges,” Netanyahu said, for which the commentators, Haaretz’s Yossi Verter, Yedioth’s Sima Kadmon and Maariv’s Ben Caspit, expressed disgust. (See Commentary/Analysis below)

What was unclear is what happens forward. Yedioth’s political affairs reporter Yuval Karni called it “one of the most serious political crises in the history of the State of Israel,” since neither leader has the minimum 61 MKs to support him. Karni reported that Likud wants to renew its contacts with Kahol-Lavan leader Benny Gantz or cause Yisrael Beiteinu Chairman Avigdor Lieberman to return to the right-wing bloc, while Kahol-Lavan is hoping for an internal revolt in the Likud party and on a government with a rotation without Netanyahu at the head. The papers write that if no one succeeds forming a government, the President could use a never-before-used loophole in Israeli law and give the Knesset one day to endorse any MK as candidate for prime minister who will get the support of at least 61 MKs. The name being bounced around is former minister Gideon Sa'ar of the Likud. But if all efforts fail to form a new government, then Israeli citizens will return to the polls for the third time in a year. (Hebrew) Rivlin had proposed his own compromise suggestion, but Gantz rejected it, Haaretz+ reported. Netanyahu now has 28 days to put together a coalition, with a possible two-week extension.

Other Top Commentary/Analysis:
We’re the Good Folks (Yitzhak Laor, Haaretz+) Racism isn’t the exclusive province of the right. Racism is the state.
Israel, Judge and Jury: When Mob Rule Overpowers the Law (Gideon Levy, Haaretz+) A  society is measured by how it deals with extreme cases; how it treats, for example, Carmel Mauda, manager of a daycare center who is accused of abusing children under her care. Enlightenment, humanity and lawfulness must still apply. If they don’t, the path to the slippery slope is short and dangerous, and will end in the public lynching of anyone who commits a crime considered serious in certain circles. These values have been totally erased in Mauda’s case. What happened in the Baby Love daycare center was indeed horrible; watching the videos is difficult. But no less difficult is the public treatment of the accused. Mauda is now in jail, contrary to a ruling by the Supreme Court, which ordered her released to house arrest. A few violent threats by furious parents, not all of them related to the victims, were enough to undermine the court ruling.
The attacks attributed to Israel are justified but one gets picture of going wild in the region (Amos Gilboa, Maariv) Israel's confrontation with Iran and its emissaries on the one hand, and the United States' struggle with Iran on the other, are two issues that we are now at a strategic juncture.
Israel’s Netanyahu Experience Validates Pelosi’s Fear of Trump Impeachment (Chemi Shalev, Haaretz+) The Ukraine-Gate scandal overpowered the Speaker’s resistance but House proceedings could still emerge as Trump’s blessing in disguise.
The First Step in a 1,000 Mile Journey to Rebuild Syria (Zvi Bar'el, Haaretz+) After over eight years of war, a 150-member committee will soon convene to write a constitution for the battle-weary country. But internal divisions and foreign interests could torpedo the accord at any time.

Interviews:
“A defense alliance with the US is unnecessary"
From his whereabouts in the US, former chief of staff Gadi Eisenkot tells in an interview with Yedioth Ahronoth about the need for the destruction of Hamas, about dealing with Iran and relations with defense ministers. “The violation of (policy of) ambiguity recently is a serious mistake that jeopardizes state security," says Maj. Gen. Gadi Eisenkot in an exclusive interview with Yedioth Ahronoth. From his stay at a prestigious Washington research institute, the former chief of staff gave this week his first interview since he removed his uniform, and he speaks in detail about his perceptions of security and policy issues. Eisenkott also talks about his relationship with Avigdor Lieberman, who "opposed the operation against Hezbollah tunnels.” I said to him: 'Mr. Minister, I respect you, I am subordinate to you, but I am forced to act according to the government’s wishes.’ And it got off the agenda." As for what is happening in Gaza, Eisenkot claims: "Strengthening Hamas is a grave mistake. We need to bring an end to its rule in the Strip." On a defense alliance with the US: "It's an unnecessary alliance. There is no logic to it. " At this time, Eisenkot publishes a document entitled "Guidelines for Security Perception for Israel", which he co-authored with Col. (Res.) Gabi Siboni. The document has a war scenario called "deterrent retaliation," and implies it’s about Israel's coping with the nuclear capabilities of countries such as Iran. (Interviewed by Alex Fishman in Yedioth Hebrew)

'Iran could fire cruise missiles at Israel from Iraq'
Head of the Research Division in IDF Military Intelligence Brig. Gen. Dror Shalom tells Israel Hayom that Iran is a "very sophisticated enemy," and the chances of a major escalation between Israel and Iran are increasing. (Interviewed by Yoav Limor in Israel Hayom)