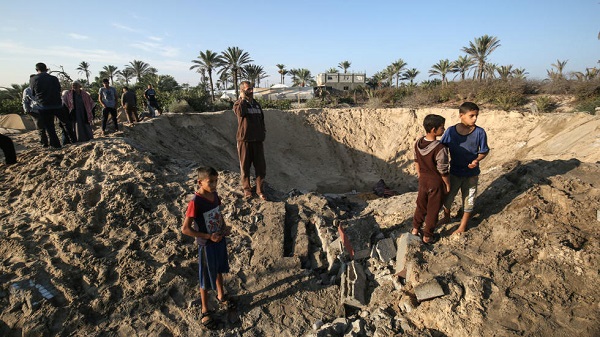 Quote of the day:
"...The most important war is the war for peace."
--Labor party chief Amir Peretz said ahead of the Rabin memorial rally, the slogan which was "No to violence, yes to peace."*
Front Page:
Haaretz
Yedioth Ahronoth
Maariv This Week (Hebrew links only)
Israel Hayom

Top News Summary:
A flare-up by Islamic Jihad in the south, a rally and a speech by Benny Gantz against hatred in Tel-Aviv and two more Arab-Israelis killed in the wave of violence in the Arab-Israeli sector were top stories in today’s Hebrew newsapers.

According to Israeli military analysts, Israel’s retaliation taken out on Hamas targets in Gaza following the 10 rockets launched by Islamic Jihad - seven of which were intercepted - at southern Israel Friday night was proportional. Yedioth’s Yossi Yehoshua wrote that there were no attempts to cause fatalities because Israel knew that it wasn’t Hamas behind the attacks, but as the sovereign, it was responsible. In fact, one Palestinian man was killed. The Hebrew papers focused on the fears of Israelis living in the periphery outside the Gaza Strip periphery and Yedioth’s front page pictured a photo of a scared Israeli girl crouched on the floor taking cover. No Israelis were injured, a home in Sderot was damaged. (video) One official in Gaza said that the rocket fire was the local Islamic Jihad’s act of defiance against Hamas. Islamic Jihad's military wing issued a statement after the rocket shooting, saying that the State of Israel "commits crimes against the Palestinian people and occupies its land" and so it “should not feel comfortable and live calmly.” (Maariv) Also, people on holiday found an explosive device hidden in a book in a Gaza periphery Israeli community. It was flown from via a balloon, but it's unclear how long ago.

While tension in the south made top news, tension in the north was also a headline, particularly the fact that Hezbollah used a surface-to-air missile to shoot down an Israeli drone last week, which the IDF confirmed. This is seen as Hezbollah leader Hassan Nasrallah following through with his warning to protect Lebanese airspace from Israeli infiltration. This apparent policy shift is a cause for concern in Israel. Nasrallah said that the firing on the Israeli drone proves that Hezbollah ‘is not afraid.’

*The Israeli newspapers’ big takeaway from the annual memorial event for Yitzhak Rabin Saturday night, was Kahol-Lavan leader Benny Gantz’s accusation of politicians using hatred as a weapon. "Rabin was murdered because of because of factionalism, because of incitement, because of hatred. Twenty-four years later and Rabin is not with us, but to our misfortune and our disgrace, incitement is rearing its ugly head," Gantz added. Ahead of the rally, Labor party chief Amir Peretz called on people to attend the rally in order “to remind everyone that the most important war is the war for peace." housands attended the rally. (Maariv)

In the Arab-Israeli sector they are in a battle for their lives. Israeli-Arab leaders decide to start a hunger strike to protest the violence within their  communities, which they accuse the authorities of not dealing with properly. Two more people were killed over the weekend, bringing to four the number people murdered in Arab towns in Israel just last week. (Also Yedioth Hebrew and Maariv) The leadership of the Arab-Israeli sector also decided to set up a protest tent in front of the Prime Minister's residence.” "The government does not want to deal with the problem,”  one said. (Maariv)

Features:
How an Israeli-Arab Psychologist Became Germany's Staunchest Islam Critic
Ahmad Mansour is waging battles against the radicalization of young Muslim immigrants, and hatred of Israel, in his adoptive country of Germany. (Liza Rozovsky, Haaretz+)
Erdogan's head: What drives the President of Turkey and where does he want to go?
The man who has ruled the republic for the past 17 years has been an easy year. Why is he angry with Israel and how has he cemented his status? If (Kemal) Ataturk was a mighty reformer in the directions we liked, Erdogan is a mighty reformer in the opposite direction, but still a reformer who changed Turkey from completely. As soon as he came to power, people like me saw it as a revolution, but we had no idea how dramatic it would be,” said Dr. Alon Liel, who previously served as Israel's ambassador to Turkey and was Director General of the Foreign Ministry. "In my opinion, Erdogan's initial goal was to change Turkey, to erase the Kemalism," explains Dr. Liel, whose doctoral thesis he did on Turkey at the time. “There have been two circles of millions of people that (Kemal) Ataturk hurt badly: the Kurds and the religious, and Erdogan belongs to the religious circle. The religious were just trampled on. They were not allowed to be in Turkish politics and public (positions). "(Eyal Levy, Maariv)
Palestinians are attending Hebrew U in record numbers, changing the face of Jerusalem
Separation barrier and tough job market seen as spurring spike of East Jerusalem residents on campus. The trend is bringing the city's Palestinian and Jewish communities closer, and creating a new elite. (Nir Hasson, Haaretz+)
A Wall, Arrests and Close Surveillance: How Israel Fences in a Palestinian Family
Their every move is filmed, every exit from their house depends on the army and they may access their land three times a year at most. The Gharib family has been living this way since Israel surrounded them with settlers. (Amira Hass, Haaretz+)
Solomon's Wisdom: The Story of the Bravest Warrior in the Jezreel Valley
He built four elite units and saved Arik Sharon's life, but in the end, Lt. Col. Shlomo Baum was forced to leave the IDF after a particularly long ideological argument. (Dr. Uri Milstein, Maariv)
Could Netanyahu Actually Be Good for Israel's Arabs?
In recent years, Israel's Arab community has been benefiting from higher budgets and making great strides in academia and high-tech, says Ron Gerlitz, the country’s most optimistic leftist. (Netta Ahituv, Haaretz+)
Gideon Levy A young Palestinian's walk of death
The guards at a checkpost that's off-limits to pedestrians claimed the young man approaching them had a knife. They kept shooting at him after he was wounded and prostrate. Now Israel won't return his body to his family. (Gideon Levy, Haaretz+)

Elections 2019 Commentary/Analysis:
Netanyahu Is Sabotaging Unity Government Talks. His Scorched-earth Tactics May Backfire (Yossi Verter, Haaretz+) Netanyahu is gunning for a third election. Helping lead the charge is the justice minister, who dumped a pail of sewage on state prosecutors.
Gantz's attempt to be crowned as Rabin's successor (Nahum Barnea, Yedioth/Ynet) The Blue and White leader, who spoke at 24th anniversary of Yitzhak Rabin's assassination, adopted the former prime minister's demeanor and used the word 'peace' more times that evening than in his whole political career; however, it is doubtful the calculating former IDF chief will be able to fill the shoes of the former leader who spoke from his gut.
Gantz, the Perfect Heir to Rabin (Gideon Levy, Haaretz+) Benny Gantz was anointed the heir of Yitzhak Rabin on Saturday; no one is a more natural heir. The nagging of the Zionist left to let their leaders speak at the rally is becoming more and more tiresome every year. There is no one like Gantz to “be” Rabin. Gantz could very well be Rabin number 2. A bit different – all at once nicer and less impressive – but like a brother in terms of his world view. The two figures are regarded with greater esteem than they deserve: Rabin as the prophet of peace and Gantz as the hope for redemption and cleansing after Prime Minister Benjamin Netanyahu. Yet just as Rabin was not the prophet of peace he was made up to be, Gantz will not bring about the long-awaited redemption.
Idle claims: Negotiations are ongoing, but it is clear that they will yield nothing (Anna Barsky, Maariv) The entire political system is awaiting Mendelblit's decision - and is anxiously looking toward a third election campaign. Even if Gantz considered the unity option, it no longer exists.
The Arab parties have laid the groundwork for a minority government (Mati Tuchfeld, Israel Hayom) In this game of chicken, Netanyahu has already decided that a third early election is preferable to ditching his right-wing allies. Gantz has not made up his mind.
Gantz would betray public's trust with minority government (Uri Heitner, Yedioth/Ynet) Likud and Blue and White owe it to Israeli voter to reach a consensus in order to avoid a third election and most of all, avoid a coalition reliant on the MKs from the Arab-dominated Joint List, who might leave the newly formed government in disarray in case of a security crisis.
In TrumpWorld and BibiWorld, truth is tantamount to treason (Chemi Shalev, Haaretz+) A cult of personality that requires swift destruction of conscientious critics is a hallmark of totalitarian regimes.
It is not (Justice) Minister Ohana that should be the subject of criticism, but Attorney General Mendelblitt (Kalman Libskind, Maariv) What happened to the Attorney General, who used to talk about a dangerous state prosecutor’s office, which stitches cases and makes leaks, and today he attacks whoever quotes him? What happened to journalists who became the prosecutor's cheerleading chorus?
Prepared for APN by Orly Halpern, independent freelance journalist based in Jerusalem.
comments powered by Disqus