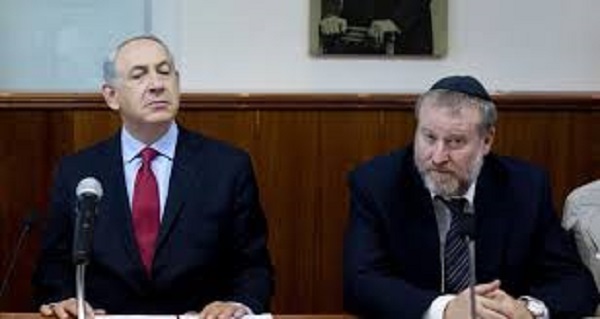 Quote of the day:
“I don’t know whether to describe myself as an Israeli Arab or a Palestinian. I’m Palestinian to the same degree that I’m Israeli. I’m Palestinian as a fact, and in my identity, but I live in the State of Israel. But what’s important is that food enables people to reveal themselves to one another.”
--Osama Dalal, an Israeli Arab chef from Acre, who has been chosen by the Jewish-Israeli owners of '12 Chairs Cafe,' one of the most popular Israeli eateries in Manhattan, to demonstrate the wonders of Palestinian cuisine in a private room at
the restaurant, for one week beginning today.*
Front Page:
Haaretz
Yedioth Ahronoth
Maariv This Week (Hebrew links only)
Israel Hayom


Top News Summary:
Following the exposure of possible improper police methods of pressure used to get Nir Hefetz, former confidante of Prime Minister Binyamin Netanyahu, to become a state witness against Netanyahu in the corruption cases, Attorney General Avichai Mendelblitt said he would probe them and Iran’s President Hassan Rohani said that today Iran will resume uranium enrichment at Fordow nuclear plant, in the latest step away from 2015 nuclear deal, which the US withdrew from - making top stories in today’s Hebrew newspapers. Also of interest, for the first time, an Israeli court upheld the expulsion of a foreign resident - who happens to be the representative of a human rights organization - due to his support for boycotting Israeli settlements and another Israeli court awarded thousands of shekels in compensation to Jewish activists at the Temple Mount.

Following the Channel 12 News report about police methods of psychological pressure used against Hefetz to share information about Netanyahu, Likud’s new faction chairman, MK Miki Zohar, called to close all the corruption cases against Netanyahu. ‘Israel Hayom’ newspaper led with an Op-Ed with a similar call. But Attorney General Mendelblitt’s response made that appear unlikely. Mendelblit wrote that a distinction had to be made between claims that someone who turned state’s evidence didn’t tell the truth and “claims of improper actions during the investigation.”Improper actions would be examined and dealt with, he said. Meretz MK Tamar Zandberg said that, “A whole camp remembered the rights of suspects and the rules of interrogations only when it affected the investigations of the Prime Minister…If the Palestinians, left-wingers and any regular witnesses and suspects were to enjoy the change of attitude from now on that would be one thing. But it’s only for the defense of a corrupt prime minister.” (Maariv)

Human Rights Watch Israel director Omar Shakir was ordered out of the country and given 20 days to leave Israel, where he lives, after Israel's High Court upheld his expulsion due to his support for the boycott movement. Shakir and human-rights activists, say the decision was part of an attempt to silence such organizations working in Israel. Justices Neal Hendel, Noam Sohlberg and Yael Willner rejected an appeal by Shakir and his organization, saying they found nothing wrong with Interior Minister Arye Dery’s decision not to renew Shakir’s visa to work in Israel. [NOTE: worthy of noting that Yael Willner was the right-wing choice of justice minister Ayelet Shaked to be appointed a justice. And Justice Noam Solberg took part in ceremony marking 50 years of West Bank settlement despite court president ruling official representation ‘inappropriate.’ - OH]  (Also Maariv)

In a different court, a judge ordered the police to compensate three young men, Temple Mount activists, two of them minors, for 20,000 shekels each, for unlawful detention. Police detained themfor attempting to hang a protest sign on the closure of the Temple Mount for Jews on Holocaust Day in 2017, took them to the police station, questioned them and released them. But it was late at night and there was no public transportation so they asked to stay there till the morning. When they finally left, it had been 15 hours since they were detained. The three filed a tort claim against the police for unlawful detention, Yedioth Hebrew reported.[NOTE: The court decision comes in the same week that a Palestinian employee of B’Tselem was hospitalized after Border Police detained him and kept him waiting in the sun for hours. No lawsuit was filed. - OH]


Elections 2019 News and Quickees:
The idea, suggested by Minister Arieh Deri, of a direct election for prime minister, rather than for the party, has begun taking hold. New Right Chairwoman, Ayelet Shaked, said she supported the idea, and, initially, the Likud party whip said the party did, too. Later the Likud party rejected the idea. (Maariv) A poll found that Netanyahu has a slight advantage over Kahol-Lavan Chairman Benny Gantz in the event of direct elections. Some 40% of respondents said they would vote for Netanyahu, while only 36% stated that they would vote for Gantz. And 24% of respondents chose the option “I don't know" or the option "I will not vote.” (Maariv) But there is an obstacle to the plan. The Speaker of the Knesset clarified that "Direct elections is only possible if a majority of 61 MKs vote for it. (Maariv)

Features:
Seven settler families guarded by 15 soldieres conduct a tense coexistence
The soldiers must enforce a 'closed military zone' order, conduct police work and clash with civilians, which is not the kind of mission they want to be assigned to. (Elisha Ben-Kimon, Yedioth/Ynet)

Commentary/Analysis:
By Expelling Human Rights Watch Director, Israel's Top Court Legitimizes the Occupation (Mordechai Kremnitzer, Haaretz+) The court's ruling to revoke Omar Shakir's residency and work visa exemplifies the slippery slope Israel is on due to its control of the West Bank, and the court's failure to stop it.
The beginning of understanding Herzl and his Zionism (Gol Kalev, Israel Hayom) Herzl understood that the answer is not the escape from Judaism but rather to return to Judaism! Hence in Zionism, he established a vehicle for such return. Similarly today, the answer to Israel-bashing is not the escape from Zionism, but the celebration of Zionism.
A Political Deportation (Haaretz Editorial) For the first time since a law was passed forbidding foreign nationals who advocate boycotting Israel to enter or remain in the country, the Supreme Court approved the deportation on Tuesday of Omar Shakir, the Israel and Palestine director at Human Rights Watch, because of his support for the BDS movement. Justices Neal Hendel, Noam Sohlberg and Yael Willner rejected an appeal by Shakir and his organization, saying they found nothing wrong with Interior Minister Arye Dery’s decision not to renew Shakir’s visa to work in Israel. In deciding to deport HRW’s representative, Israel has taken another step down the dubious road of authoritarian regimes that deny human rights and silence criticism at any cost, like Syria, Iran and North Korea.
Arab Spring 2.0 (Oded Granot, Israel Hayom) The civilian unrest in Lebanon and Iraq is jeopardizing Iran's interests there, especially since the protestors are no longer demanding a change in the regime – they want to swap out the entire system of government.
(Hamas chief) Sinwar, You Don’t Scare Anyone Here (Rogel Alpher, Haaretz+) Former Israeli ambassador to the U.S. Michael Oren published an article on Monday in The Atlantic, “The Coming Middle East Conflagration,” in which he described a scenario of the war that he claims was discussed by cabinet ministers twice in the past week, and for which the Israel Defense Forces is preparing at present. It goes approximately like this: Israel attacks a sensitive Iranian target, an Israeli minister brags and humiliates the Iranians. Iran launches cruise missiles that penetrate the Israeli air defense system and hit the Kirya Defense Ministry headquarters in Tel Aviv. In response Israel attacks Hezbollah headquarters in Beirut. Then begins what Oren calls “the real war.” Missiles would rain down on Israel, at a rate of 4,000 a day. The Iron Dome anti-missile system collapses under the burden. And then I asked myself: Who leaked cabinet discussions to Oren? Maybe Chief of Staff Aviv Kochavi, maybe Netanyahu himself. In any case, it turns out that even in scenarios discussed in the cabinet Israel is portrayed as an empire – our situation has never been better, and our enemies are properly deterred. And that is known even to Yahya Sinwar, the leader of Hamas in the Gaza Strip, who is threatening to launch missiles at Tel Aviv for six consecutive months, in response to the promise by Kahol Lavan leader Benny Gantz to deter Gaza properly when he is prime minister. Sinwar, you’re not scaring anyone here. After the Iranians finish off Tel Aviv, you won’t have anything left to bomb. Go threaten the Egyptians.
An election season of Gaza violence (Alex Fishman, Yedioth/Ynet) As elections loom in both the Palestinian territories and Israel, politicians on both sides engage in populist moves, which could well lead to a military confrontation in the Hamas-run enclave.
We’re Used to the Noise of Gaza (Zvi Bar'el, Haaretz+) Like the collapsing health-care system or the budget deficit, like the faulty handling of railroad problems or the crushing of the legal system – Gaza is an election slogan, an unfulfilled promise, concrete proof of the failure of the government to protects its citizens. And, alternatively, a focal point for garnering support for the omnipotent leader.

Elections 2019 Commentary/Analysis:
In Direct Election for Israeli Prime Minister, Some Right-wing Voters May Defect to Gantz (Jonathan Lis, Haaretz+) It's too early to tell if the trial balloon to hold direct election will take off, but rightists who chose Lieberman's party in September election show that clear division into two blocs doesn't mean voters would split that way.
A unique solution that requires a special law (Gideon Allon, Israel Hayom) Israel has already held an election for prime minister without electing a Knesset. A law to reinstate that possibility would probably pass easily, and would solve the current political impasse.
Impeachment Envy (B. Michael, Haaretz+) During the last few years it’s been hard to find good reasons to be jealous of the United States. It is overflowing with oligarchic corruption, revealing ugly greediness, demonstrating overwhelming stupidity in its choice of president and exhibiting massive doses of obtuseness and racism – in short, hardly an object of envy.  But now a reason has emerged for being green with envy: the impeachment process that has been launched against U.S. President Donald Trump. We’re not simply talking about schadenfreude or rejoicing over the remote chance that this awful man gets removed from his post. It’s envy over the very fact that there is a constitutional impeachment procedure. Because we don’t have one.
Rabin's murder was exploited by the left for a McCarthyist campaign against Netanyahu and the right-wing (Zalman Shoval, Maariv) The rally on Saturday night was not a memorial event for Yitzhak Rabin but rather a political show that sought to advance party interests. The late prime minister has become a tool to attack half the nation.
Police Misconduct in Interrogation of Netanyahu Witness Won't Be What Collapses the Case (Gidi Weitz, Haaretz+) Numerous instances were reported in the past few years in which detectives took improper shortcuts in investigating corruption allegations.
Prepared for APN by Orly Halpern, independent freelance journalist based in Jerusalem.
comments powered by Disqus