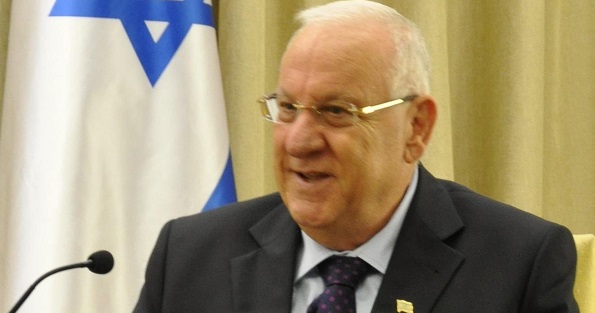 Quote of the day:
"The days before Rabin’s murder were days of intense and legitimate public debate, that descended in some cases to criminal incitement and defamation that motivated the murderer to try and assassinate Israeli democracy. We mustn’t forget the slippery slope from incitement and hate to bloodshed.”
—Israeli President Reuven Rivlin said Sunday, imploring all political camps not to "fuel hate."*

"It is enough to listen again, and again, to the speech 'their children and our children' by the mutation called 'Erez Tadmor,' spokesman for the Likud campaign and a close associate of Netanyahu, to realize that the real threat to the Zionist vision established here 71 years ago is what grew here, within us."
-Top Maariv political commentator Ben Caspit in a chilling Op-Ed about hate-speech coming from those in office.**
You Must Be Kidding:
Police had to escort the audience to their cars to physically protect them from right-wing protesters who forced to cut short the screening of the film, "The Advocate," about human rights lawyer, Lea Tzemel, who represents in court Palestinians accused of terror acts.***
Front Page:
Haaretz
Yedioth Ahronoth
Maariv This Week (Hebrew links only)
Israel Hayom


Top News Summary:
Accusations, labels, and lashing out at politicians and by politicians, at memorials for Yitzhak Rabin, in the street, in the court and in the Knesset, were the top stories in today’s Hebrew newspapers.

*It started at a memorial for Rabin at Mt. Herzl, where Rabin's grandson called on Israeli Prime Minister Binyamin Netanyahu to resign, by saying politicians should “take responsibility…If you are stained, move aside, leave office.” Netanyahu blasted the “shameful political lashing-out.” Netanyahu said he did not condone calling Rabin a traitor and no one said anything when he was called one. At the ceremony, Israeli President Reuven Rivlin warned about the hatred and incitement in Israeli society. “We mustn’t forget the slippery slope from incitement and hate to bloodshed," Rivlin said, imploring all political camps not to "fuel hate. It is not the way of the Israeli nation,” he said. In Ashkelon, right-wingers verbally attacked Kahol-Lavan MK Gabi Ashkenazi, a former chief of staff, shouting "Leftist, get out of here. You go with the Arabs. (We want) only Bibi." (Yedioth Hebrew) At a Rabin memorial session at the Knesset, Kahol-Lavan leader Benny Gantz, who has nine days left to form a government, said: "Let's not tell ourselves stories. If today at noon Gabi Ashkenazi walks in Ashkelon and people shout at him harsh derogatory words, it is coming from and led from somewhere, and we must all fight against this phenomenon uncompromisingly. I urge you to understand that this is happening right before our eyes." Gantz warned that paralysis of the government exposed more danger: "The paralysis that we're currently in is fertile ground for deepening divisions and controversies. The looming danger for Israeli society is the greatest since the days before the murder.”

In a courtroom, Netanyahu's former media adviser who became a state witness, Nir Hefetz, insisted his “testimony is pure truth” and that he stands by it - this despite the pressure from Likud officials to get him to retract his testimony. But Hefetz left the courtroom angrily after the judge decided that the hearing would be held with open doors. “You are letting my blood be spilled,” he said. After he returned, he apologized and said: “I’m paying an inconceivable price for the truth." (Also Yedioth Hebrew)

Elections 2019 Quickees:
In election news, Netanyahu accused Yisrael Beiteinu chief Avigdor Lieberman of coordinating with Kahol-Lavan and with the Joint List against the Likud. According to Netanyahu, Lieberman’s ultimatum that the Likud needs to break up its bloc by abandoning the ultra-Orthodox (Shas, United Torah Judaism and Yamina), was actually meant to allow Lieberman and Kahol-Lavan form a minority government with the backing of the Joint List. (Also Maariv) But the Joint List said it was not interested in toppling Netanyahu if it meant a government with Lieberman, whom it calls a racist. Yedioth and Haaretz+ suggested possible scenarios, the most likely of which was third round of elections.

Elections 2019 Commentary/Analysis:
It is Gantz's hour to decide whether to conquer the target or disappear from the map (Ben Caspit, Maariv) If the Kahol-Lavan chairman wants to be prime minister, he has to announce yesterday that he is accepting the president's proposal for a unity government. And also: This is how the promising duet, Bennett-Shaked, the mistake that could cost them their political careers. Today it is already possible to establish to a reasonable degree of certainty that this promising and talented duo has worked their way very resolutely into the dustbin of politics. Bennett's creep into the dubious status of defense minister for fifteen minutes in a transition government lacking any legitimacy turned him what he promised he would not be. When he entered politics, Bennett dreamed of present a clean, stately, ideological and pure alternative to Netanyahu. What turns out now is that he has become the ridiculous replica of that same Netanyahu, only without Sarah.
Poker-faced Lieberman Reshuffles the Political Deck, if Only for the Thrills (Chemi Shalev, Haaretz+) The wily kingmaker’s ultimatums stymie Gantz and Netanyahu – but could also inflame Jewish-Arab tensions.
Israeli citizens experience separation and separation instead of sharing and uniting (Anat Nehemiah Lavie, Maariv) The citizens of the state look up to their leaders and do not see a model focused on the common good. The next generation that will lead us is absorbing now completely different values.

Interviews:
The former Duvdevan Unit soldier that disguised as an Arab who now is in a Rambo film
As a Duvdevan soldier, Aharon Cohen, 43, participated in dozens of dangerous operations in the Territories. After his service, he became a U.S. Army Counter Terrorism Unit trainer and  security guard for celebrities, and then became a firearms training instructor for actors. Now, with a role in the latest movie in the Rambo series, he dreams of an acting career: "It helps me deal with military service traumas.” (Ayala Or-El, Yedioth Hebrew)
What do your friends think about being a mid-life actor?
"Everyone thinks it's completely ridiculous, but they support me because they know me and know that it helps me overcome my military past. During military service, I was exposed to the black side of human nature, in all its ugliness. It is very difficult to shake off this part of your life. Although military service has shaped me, contributed to my self-confidence and pushed me forward, it has also had a negative effect. The acting has become my therapy. I am happy to replace the live bullets with empty ones, it’s much safer.”
Are you in touch with your friends from the (Duvdevan) unit? Did they see you in Rambo?
"I'm in touch with some of them. All my friends remained in the military and hold prominent positions, some still serve in senior positions. And yes, they saw me in Rambo and are crazy about it.”