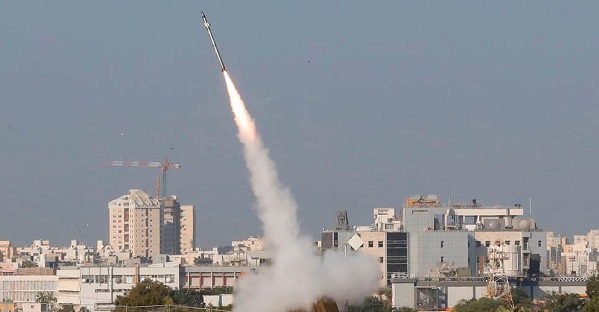 Quote of the day:
"They, who serve in the most moral army and the most advanced intelligence services in the world, didn’t know that the flimsy tin shack had long since stopped being part of the “Islamic Jihad infrastructure,” and it’s doubtful that it ever was. They didn’t know and they didn’t bother to check — after all, what’s the worst that could happen?"
--Gideon Levy in an Op-Ed on the massacre of eight members of a Palestinian family in Gaza by the IDF.*
You Must Be Kidding:
After reports on Arabic social media that members of the Abu Malhous family in Gaza was killed in an IDF missile attack Wednesday, the IDF's Arabic-language spokesperson, Avichay Adraee, falsely posted on his official social media accounts that a senior Islamic Jihad commander, named Abu Malhous, was killed in a missile strike. Adraee said he was in charge of the group's rocket squadrons in central Gaza. However, Israeli security officials said no militant by that name exists. IDF Spokesman Adraee made it up. Now, the IDF is now probing how it mistakenly bombed a row of tin shacks belonging to the Abu Malhous family, killing eight of them, including a mother and children.**
Front Page:
Haaretz
Yedioth Ahronoth
Maariv This Week (Hebrew links only)
Israel Hayom

Top News:
Israeli Prime Minister Binyamin Netanyahu is in a panic, fearing that Kahol-Lavan leader Benny Gantz will form a minority government, Netanyahu supporters are preparing to show their support of him in the streets ahead of his possible indictment this week and two rockets from Gaza were intercepted over Beersheva and Hamas is believed to be the launcher - making top stories in today’s Hebrew newspapers. What did not make 'Israel Hayom’s' pages, but was on the front page of Haaretz, was an article on page 6 of Yedioth and was two paragraphs in an article in Maariv, was that the Israeli army is probing why it bombed a tin shack and killed eight members of a poor family in Gaza last week. Haaretz had answers.

Elections 2019:
Ahead of a dramatic week, with only a few days left until Gantz’s mandate to form a government ends and until Netanyahu is expected to be indicted, Netanyahu called Saturday for an “emergency meeting” today with the leaders of the right-wing parties, declaring that if Gantz forms a minority government with the support of the Arab parties, it will harm Israel’s security. Gantz responded that the only emergency for Netanyahu was that the chance that his rule would come to an end soon. Gantz requested a meeting with President Reuven Rivlin Saturday night, and the latter said he was doing everything possible to convince the sides to form a wide unity government. Kingmaker and Yisrael Beiteinu Chairman Avigdor Lieberman said that ego and personal interests were what was preventing that from happening.


Other Top News:
Likud officials have received information that on Tuesday Netanyahu will be charged in either two or all three of the corruption cases against him. They are preparing to stage a mass protest Monday night in front of Attorney General Avichai Mendelblitt’s home and at traffic junctions across the country. Maariv reported that recently, right-wing activists spread threats against the Attorney General and senior prosecutors Shai Nitzan and Liat Ben-Ari. Last Thursday, High Court Justice Menachem Mazuz criticized the statements of Justice Minister Amir Ohana, who spoke against the state prosecution. Mazuz said that having a justice minister who pushes against the judicial system 'is a troubling and disturbing situation' and ‘makes it difficult for the system to function.’

Meanwhile, one of the state witnesses against Netanyahu, his former spin doctor, Nir Hefetz, accused Netanyahu of being behind the appointment of Yaakov Berdugo (as political commentator) on the Army Radio station. Hefetz raised this because he is threatening prosecution against Berdogo, claiming that in a WhatsApp group of Likud activists, Berdugo spread information about Hefetz’s questioning by police that was prohibited from publishing. (Yedioth Hebrew)

Israel struck Hamas targets in Gaza early Saturday after it intercepted two rockets fired late Friday night after a fragile truce was achieved Thursday between Israel and Islamic Jihad. While the IDF had not hit Hamas last week during the exchange with Islamic Jihad, this time it believed that Hamas soldiers had fired the rockets contrary to their leaders’ orders. Before the shooting on Beersheva: Hamas leader Ismail Haniyeh and Islamic Jihad's leader spoke and declared unity. (Also Maariv)

**The Israeli army admitted to killing eight members of the Abu al-Malhous in Gaza, saying it thought the house was empty. It promised to invetigate the mistake. The real story was what a probe by Haaretz revealed: That the IDF shot the missile based on outdated intelligence, that could have been altogether wrong in the past. Locals said that the extended family has lived there for over 20 years. And the false attribution by IDF Arabic Spokesman Avichay Adraee was based on social media rumors. Adraee said that the building was a command post for an Islamic Jihad rocket launching unit in the central Strip and the strike was meant to kill the leader, ‘Abu Malhous.’ According to an initial investigation the army conducted, the strike was never intended to target a given individual, despite the statement released by its spokesman, but rather to hit infrastructure used by Islamic Jihad. "This was a very simple, poor family, who lived from hand to mouth in a tin shack, with no water or electricity," said a neighbor. (Also Ynet Hebrew) (Middle East Monitor writes about two other mistaken targeted killings last week, which killed three brothers at the entrance of their home and killed a father and his two children near their house.) The news of the mistaken killings comes after the IDF hailed the assassination of Islamic Jihad northern Gaza military commander, Bahaa al-Ata, as one of ‘surgical precision.' Meanwhile, Israelis are suing Hamas for compensation after their family members, four soldiers, were killed in a truck ramming attack over the Green Line in 2017, by a young Palestinian from E. Jerusalem, not far from his home.

Elections 2019 Commentary/Analysis:
Netanyahu is already preparing for his next war (Yossi Verter, Haaretz+) The prime minister is plotting what he'll do while on trial – because going home is not an option.
Gantz's choice (Ben Caspit, Maariv) Netanyahu is lying again when he claims that a narrow government endangers the security of the state. The only thing that it endangers is the continued sitting of the roayl family at the Balfour (official prime minister) residence. Gantz sees the Prime Minister's office from close range, the chairman of Kahol-Lavan has four days to make one of the most difficult decisions of his life. He is torn between the narrow government option and the president's outline (for a unity government led first by Netanyahu) or a third round of elections...The relevant option right now is to go to elections. Kahol-Lavan will arrive in an improved state. Netanyahu will carry on his back two to three indictments. Kahol-Lavan's voters are hungry, the Likudniks are tired, confused and some of them have thoughts of treason. The majority of the public, from all sides, blames Netanyahu of deteriorating to round three (of elections)..
With days left to form government, Gantz under attack from Netanyahu (Yedioth/Ynet) If Gantz-led minority government is indeed formed, Netanyahu will be out as PM within days, making third election a much more lucrative prospect for Israel's leader, who has gone on the offensive appealing directly to Blue and White MKs.
A racist unity government (Friday Haaretz Editorial) Every time Israel faces a military “escalation,” the thin wrapping that barely covers its institutionalized racism is revealed. The primary inciter, as usual, has been Prime Minister Benjamin Netanyahu, who, in a series of tweets and Facebook posts, sent the message in recent days that a minority government supported by the Arab parties would be “a slap in the face of IDF soldiers and a danger to the State of Israel.” In his address to the Knesset this week, he similarly exploited the opportunity to depict Arab Knesset members as supporters of the enemy. Next in line after Netanyahu, and sometimes even surpassing him, is the man who has become the kingmaker du jour, Avigdor Lieberman. With the entire political system as his feet, the Yisrael Beiteinu party chairman has gone around in recent days like someone whose every racist thought deserves special attention. In an interview with Channel 12 News on Wednesday, he regurgitated his usual incitement against members of the Arab parties’ Joint List. “As far as I’m considered, they’re a fifth column – people who want to destroy the State of Israel from within and work against its interests,” he said.
Netanyahu and Other Signs (Carolina Landsman, Haaretz+) 1. “What I’m lacking is a clear, sharp statement from all of Kahol Lavan’s chiefs that they accept the president’s blueprint,” Avigdor Lieberman said, referring to Reuven Rivlin’s proposal to break the deadlock and achieve a rotating premiership for Benny Gantz and Benjamin Netanyahu. What do you say? Maybe he’ll also demand that Kahol Lavan’s Yair Lapid wear a floral dress and that Gabi Ashkenazi put on lipstick for the occasion? Lieberman’s aggressiveness isn’t only related to the political stalemate that Israel is in. It also relates to the fact that anyone here who embraces liberal rhetoric is seen as weak, even if, like Gantz, he’s a former army chief. The only way to stand next to Netanyahu and his colleagues and still look like a man is by not being liberal. That’s Lieberman’s luck, and the masculinity of anyone who has a background with a right-wing or criminal worldview is protected. It’s another possible explanation for “the left wing’s problem.” Being left-wing became synonymous with femininity. Men are right-wing. 2. and 3. Make no mistake, this thing that the right is doing by vindicating Rabin amid allegations that he was a traitor and then portraying him as a senile grandfather who left home for a daily stroll and got lost in the Norwegian capital is the same as labeling Rabin and his colleagues “Oslo criminals.” It’s all designed to deny the incitement that led up to the assassination and to rewrite the history of the political discourse that produced Rabin’s assassin.

Interviews:
"The decision to label products from the settlements made me feel like a Jew with a yellow (star) badge”
When the European Union decided that products from the settlements should be labeled, Psagot Winery CEO, Jacob Berg, chose to fight the directive by legal means. He lost, but declared that the fight was not over. (Interviewed by Ilana Stutland in Maariv’s daily Magazine supplement, pp. 4-5)

The Gatekeeper: Former senior Shin Bet official on the collapse of the illustrious unit
Shlomo Harnoy, who was appointed Commander of the Personal Security Unit after Rabin's assassination, analyzes the failures that led to the national tragedy and shatters the conspiracy theories. (Interviewed by Eyal Levy in Maariv)

Who moved my tahini?
An interview of the winning chef of ’Master Chef' (reality show), Nuf Atamana-Ismail, published last month in Yedioth's “7 Nights” magazine supplement, sparked a culinary battle between senior Israeli chefs in the past month. On the Arab side, they claim that the Jews also stole their food and that the success of the "new Israeli cuisine" came at the expense of another erasure of the Palestinians. On the Jewish side, they answer that they got inspired and developed what was here, explaining that this is exactly how local cuisine is brought into the world. Eyal Shani, Erez Komarovsky, Farah Raslan and others explain why this is not just another conversation about hummus and shawarma. (Alon Hadar, Yedioth Hebrew)

Prepared for APN by Orly Halpern, independent freelance journalist based in Jerusalem