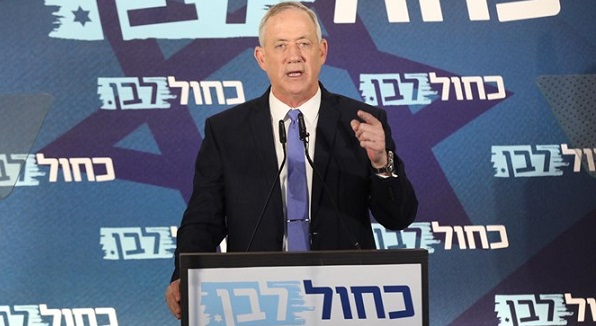 Quote of the day:
“We see this as a way of incentivizing Jewish students to engage in efforts aimed at promoting shared society and Jewish-Arab coexistence."
--Dr. Ziad Mahameed, a local physician who serves as secretary of an Arab-Israeli non-profit that now gives grants to needy Jewish university students.*

Elections 2019 Quickees:
A last minute unsuccessful meeting between Kahol-Lavan leader Benny Gantz and Likud leader Prime Minister Binyamin Netanyahu to discuss forming a unity government before time runs out Wednesday night at midnight tension in the north after four rockets were shot from Syria at Golan Heights and intercepted by Israel, and lots of reactions and commentary on the Trump Administration declaration that settlements were not illegal according to international law - made top stories in today’s Hebrew newspapers.

Also, President Reuven Rivlin sharply condemned Prime Minister Binyamin Netanyahu’s verbal attacks on the Arab Knesset members, whom Netanyahu called “an existential threat.” The characterization of all Arab elected officials as a ‘threat’ to the existence of the State of Israel and as a ‘fifth column’ must be emphatically denounced," he said in a statement released following a meeting with Netanyahu. (Also Maariv) The day before, right-wing officials threatened to ruin a Knesset conference today that will deal with harm towards Arab MKs. The Knesset event was initiated by Amnesty International and Knesset members from the Joint List. MK Sheetrit (Likud): "The State of Israel may not host an organization calling for its boycott.” The conference will deal with a new report by Amnesty on "Reducing the Sphere of Action for Palestinian Members of the Knesset," based on allegations of "disbanding bills to strengthen democratic values in the country, inciting and demonizing and reducing freedom of expression of Knesset members representing the Arab public - as part of the government's practices in recent years.”  (Maariv)

Other Top News Summary:
Netanyahu celebrated the US decision to declare that settlements were legal with a tour of settlements in the West Bank. But elsewhere in the world they warned of the consequences. The UN Security Council convenes today to discuss it, and  the UN Human Rights office said that Israeli settlements remain unlawful no matter what Israel says. Russia and Arab Nations warned it could 'Escalate' tensions and lead to ‘dangerous consequences.’ The Arab League chief said the move will lead to 'more violence and cruelty' against the Palestinians and that it undermines peace prospects. Maariv’s US-based corresponded, Shlomo Shamir, quoted Western diplomats who said they ”don't remember a president who trampled on the prospect of peace like Trump.” Some believe the reason for this declaration now is because Secretary of State Mike Pompeo decided to demonstrate his status as an active and involved foreign minister. Meanwhile, the Dutch parliament rejected the European Union new mandatory labeling of settlement goods. Israel hopes that other European countries will follow the Dutch lead.

Features:
Trump Supports the Truth: How U.S. Officials Explain Pompeo's Settlements Statement
Haaretz sent an embassy official some follow-up questions about the recent shift in American policy – these are the answers we got. (Noa Landau, Haaretz+)
Secular Israelis Flock to West Bank Settlements in Search of Good, Cheap Life
Who wouldn’t want a great house and a nice backyard for only a million shekels? This is how Karnei Shomron, Beit Arye, Ariel and Kiryat Arba became legitimate real estate attractions for young – and secular – Israeli families. (Gili Melnitcki, Haaretz+)

Commentary/Analysis:
Editorial Trump's poisoned gift to Israel (Haaretz Editorial) The U.S. declaration could provide a tailwind to the right-wing plan of annexation.
Why do American Jews oppose an Israeli consensus on settlements? (Jonathan S. Tobin, Israel Hayom) Reaction to Trump’s latest decision once again proves that liberal Jewish groups see Israel in the context of American politics, not Middle Eastern reality
Pompeo’s Settlements Edict Is Another Trump Trinket That Netanyahu Sells as Pure Gold (Chemi Shalev, Haaretz+) By attaching themselves to the U.S. president’s legacy, the settlers risk payback from a Democratic successor.
Confessions of an ashamed European (João Lemos Esteves, Israel Hayom) If we concede that Europen Union should protect an ethical objection of consumers to buy products from the West Bank or the Golan Heights, then, logically speaking, the European Union legitimates a total boycott of Israeli products.
It’s Open Season on Land Theft (Zvi Bar'el, Haaretz+) The key sentence in U.S. Secretary of State Mike Pompeo’s statement, which cloaked the West Bank settlement project in legality, is in the words “the conclusion that we will no longer recognize Israeli settlements as per se inconsistent with international law is based on the unique facts, history and circumstances presented by the establishment of civilian settlements in the West Bank.” The meaning of this policy is that any country, be it Russia, China, Iran or even the United States itself, can create “unique facts” and new “circumstances” in any area it wants, and if they hold that area long enough, they can enjoy legal status there.
Another episode in the confrontation: The potential for escalation against Iran is increasing (Tal Lev-Ram, Maariv) The direct military confrontation between Israel and Iran is still at low flames, but the potential for escalation in light of the situation in the region has increased, and (what happened) last night is likely to be another chapter in the confrontation.
Israel Strike Against Iran Sends a Message: We Are No Saudi Arabia (Amos Harel, Haaretz+) But a wrong turn by Israel could lead to a significant escalation with Iran.
Syrian rocket fire unmasks new tensions with Iran (Ron Ben-Yishai, Ynet) Latest rocket salvo from Syria was most likely carried out by Iranian proxies as part of a new retaliation policy against alleged Israeli strikes in the region, meant to combat Islamic Republic's imperialist aspirations.
Syrian Rockets Fired at Israel Are Part of Iran's New Deterrence Policy (Amos Harel, Haaretz+) In recent years, Tehran has only responded a few times when attacks have been attributed to Israel. Now, it can be assumed that Iran has a sweeping policy: Every action has a reaction.
Beware the acolytes of Bishara and Kahane (Ben-Dror Yemini, Yedioth/Ynet) Netanyahu has taken a far-right turn and the Joint List is apparently advocating for Hamas and Islamic Jihad; Rivlin's outline for a rotating premiership is not the best option, but is the lesser of all evils.
Israel and Hamas appear inching to Gaza agreement (Elior Levy, Yedioth/Ynet) The two sides have in the past 24 hours appeared to make mutual gestures regarding an arrangement to maintain calm in the troubled Strip, including ongoing halt in the often violent Friday protests along the border fence.
Israeli Leaders' Unspoken Advice to the People: 'Get Used to the Rocket Fire' (Sami Peretz, Haaretz+) Is security measured by the number of dead and wounded? Or should it be measured by the number of lost days, the number of hours spent in bomb shelters and the amount of time needed to return to ordinary life without uneasiness and anxiety? One conclusion at that IDF forum was that there’s a gap between Israelis'  expectations and what the military can provide.
Israeli Parents Push Back on Religious Indoctrination in Schools (Or Kashti, Haaretz+) According to the Education Ministry, 'Jewish-Israeli culture' is taught in a pluralistic and sometimes critical fashion – but countless examples prove otherwise. The mother who refused to have her son sleep in a settlement and meet with settler teens undermined another educational “norm.” Her opposition was principled. It was a refusal to encounter “the other” without critical context and suitable preparation and without any mention of the occupation. Unusually, the school allowed her to pick up her son before he crossed into the West Bank.

Elections 2019 Commentary/Analysis:
Lieberman Is Still on His Mission to Depose Netanyahu (Anshel Pfeffer, Haaretz+) Everything the Yisrael Beiteinu leader has done in the past year has been aimed at ending the Netanyahu era. He hasn’t achieved it yet — but with hours to go, he’s not giving up.
Can Israel rush into new elections? (Moran Azulay and Amir Alon, Yedioth/Ynet) Under the law, there are strict guidelines for each step of the electoral process, and while there are those in the Knesset who wish to shorten the timeline, they might be defeated by simple logistics.
Stay With Us: The prelude to forming a government in Israel has never been more obscure (Ben Caspit, Maariv) Netanyahu tries to escape the terror and gain time, Gantz tries not to become Livni's modern incarnation, and Lieberman tries to maximize his status as the greatest Israeli politician of his generation.
There Is No Good Option Outside the Voting Booth (Uzi Baram, Haaretz+) A minority government is not a realistic option. Some commentators adore the idea, which depends entirely on Avigdor Lieberman’s position. But given his views on Arabs, optimism is not in order. A unity government is a worn-out concept which everybody exploits in a different way. The optimal unity government would be one between Kahol Lavan and Likud. The two parties would agree on a rotation and on basic guidelines, and would together reach out to other parties to join the coalition. But when Prime Minister Benjamin Netanyahu calls for unity, he means a unity government in which Kahol Lavan is forced to share power with all the elements inside his 55-seat bloc. It would be a Bibi-ist dictatorship. The man who lost the election hopes to win in building a government.
Unity, minority, election: Israel is running out of options (Yonatan Baniyeh, Yedioth/Ynet) Blue and White leader Benny Gantz has until Wednesday midnight to form a government, but the political system apparently at an impasse, what happens when, like Netanyahu, he concedes