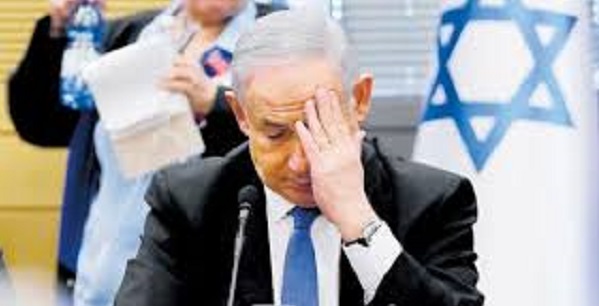 You Must Be Kidding:
The maximum number of entries is 40 times a year for olives, 50 times for figs, 30 for barley and 220 for tomatoes or strawberries.
--IDF has made limitations on how often Palestinian farmers can access their agricultural land. **
Front Page:
Haaretz
Yedioth Ahronoth
Maariv This Week (Hebrew links only)


Elections/Indictment News:
Today’s Hebrew newspapers focused on the call for primaries by Israeli Prime Minister Binyamin Netanyahu’s biggest opponent, Gideon Saar,  in order to choose a new leader for the Likud party, who has not been indicted on corruption charges, while Gantz called on senior Likudniks to form a unity government with him as head for the first two years of a rotation government. (Maariv) and after two years, if Netanyahu was no longer facing trial, then Netanyahu could serve.

This comes following the tumultuous news on Thursday that Netanyahu was indicted in three corruption cases against him, after which he gave a fiery speech in which he called to 'investigate the investigators.' Demonstrations took place for and against Netanyahu took place across the country. Gantz warned Netanyahu not to risk igniting a civil war. Maariv reported that a senior police official said that the "Prime Minister and Likud ministers are doing everything possible to impair our ability to conduct an investigation.” A police official referred to the prime minister's attack on the law authorities, saying: "The statements come from distress but are dangerous and are an attempt to damage the police image." (Maariv) Kahol-Lavan demanded Netanyahu resign from his ministerial posts: health, social affairs, agriculture and Diaspora affairs and he will be doing that. Labor-Gesher asked for the formation of a Knesset committee to deal with Netanyahu immunity.  And in Paris, they hope that Netanyahu will be replaced and he will return to the speech he gave at Bar Ilan University where he spoke of a two-state solution.


Features:
Gideon Levy Something's rotten at this settlement winery – and we don't mean the grapes
The land is owned by Palestinians, with documents to prove it – but is now the site of a Jewish winery. After the EU ruling that settlement products must be marked as such, Europeans will know the origin of Psagot's wines. (Gideon Levy, Haaretz+)

Commentary/Analysis:
When Life Gives Them Arabs, Israel's Jewish Politicians Make Lemonade (Carolina Landsmann, Haaretz+) On Thursday I met with an acquaintance who breathed a sigh of relief when the possibility of a minority government supported by the Arab Joint List dropped off the agenda. Imagine what would have happened, what a swamp of hatred and racism Benjamin Netanyahu and his colleagues on the right would have dragged us into. Life here would have become a Ku Klux Klan-like nightmare.
Pompeo, AIPAC and Jewish American priorities (Caroline B. Glick, Israel Hayom) For the Europeans and the American Left, the term "settlement" is a password that opens Pandora’s Box of anti-Semitism. Pompeo took their buzzword away.
The U.S. Believes Israel Is Allowed to Rule Here. But What About Us? (Nave Dromi, Haaretz+) The U.S. policy change is encouraging – for years we’ve been hearing from anti-Israel officials – Jews and non-Jews – that the settlements aren’t legal according to international law. But there are different legal interpretations regarding the legal status of the settlements.
Settlements are not just a land dispute up for negotiation (Melanie Phillips, Israel Hayom) Every part of that claim—that Israel is in “occupation,” that the land it is “occupying” is “Palestinian territory,” and that Israel is acting illegally—is false.
Extreme reactions to Pompeo’s announcement explain demise of Israeli left (Israel Harel, Haaretz+) Labor leader Amir Peretz joined the chorus of critics ignoring the history of his own party and the importance of the settlement project.
The end of the two states solution is just a myth (Shaul Arieli, Haaretz+) Every year, Israel’s Central Bureau of Statistics discloses the truth about the settlements in the West Bank and in Jewish neighborhoods in East Jerusalem. This year, the disappointment for annexation adherents is greater than ever, thanks to the expectations stirred by Israel’s most messianic-ultranationalist government ever and the unprecedented support of the Trump administration. The figures again show that any annexation would harm Israel’s democracy and its Jewish identity, and that the settlements’ existence does not preclude a two-state solution — if and only if both sides and the U.S. administration have a sincere, responsible political will to achieve it. In Judea and Samaria, the Israeli population rose by 14,395 this year. At the end of 2018, the number stood at 427,000, less than 5 percent of Israel’s total population. This year the proportion of Palestinians in the population of Judea and Samaria rose to 87 percent, making any attempt at annexation a security, economic and social nightmare. This year, again, the growth rate for the Jewish population in the district was higher than for Israel as a whole, but the multiyear trends show that this is having no effect on the Palestinians’ demographic and territorial dominance (98 percent of the land in Judea and Samaria is owned by them).
Netanyahu’s Indictments Aren’t the Biggest News in Israel This Week (Anshel Pfeffer, Haaretz+) It’s not Madonna and Messi who can make Israel a more normal place. Sylvan Adams is a Jewish billionaire with an interesting strategy to his philanthropy. He believes that by bringing major sporting and music events to Israel, he can enhance Israel’s image as a thriving and most important, normal country. Last year, he spent $80 million on bringing the first stage of the Giro D’Italia, the world’s second-most important bicycling race, to Israel, where it launched from the walls of the Old City. Earlier this year, he funded the performance of Madonna at the Eurovision contest in Tel Aviv. And on Monday, he was one of the main sponsors behind the Argentina-Uruguay football game. But does the fact that, thanks to the largesse of billionaires, Israel hosts such luminaries, make it a “normal” country?
How shakshuka and other Middle Eastern dishes turned into iconic 'Jewish food' (Rafram Chaddad and Yigal Nizri, Haaretz+) Taking what Jews and Arabs have cooked for generations and attaching the label 'Israeli' to it is culinary injustice.
Gaza's Hamas rulers must choose between Iran and their own people (Alex Fishman, Yedioth/Ynet)  Iranian financial and military aid to the terror group comes with strings attached that increase the strength of the Islamic Jihad and threaten improvements to the lives of Gazans through international investments.
The Missing Ingredient in Hamas' and Islamic Jihad's War Against Israel (Amos Harel, Haaretz+) Politicians' embrace of the Israeli army chief blurs lines, raising uncomfortable questions.
Iran's restraint over Israeli attacks could change in a heartbeat (Alex Fishman, Yedioth/Ynet) The Iranian regime is preoccupied by protesters at home, in Iraq and in Lebanon all threatening the Republic's hegemony and demanding regime change, risking its grand Mideast strategy.
Iran unrest gave Israel a window to strike. Now the danger lurks elsewhere (Amos Harel, Haaretz+) At what point would Russia demand Israel cease its hostilities?
Israel sends rare message to Tehran, Damascus and Moscow (Ron Ben-Yishai, Ynet) The IDF's unusually aggressive attack on Iranian military targets in its war-torn neighbor to the north is supposed to demonstrate its new, harsher retaliation policy to attacks on its population centers.
From Iran to Hong Kong, the world is becoming ungovernable (Ofri Ilany, Haaretz+) The dominant political trend of the past year has been popular uprisings that are jolting the ruling institutions. But anarchy isn't the worst that could happen.
Yad Vashem Doesn't Have the Courage to Be a Global Beacon of Conscience (Gideon Levy, Haaretz+) For years, Barry Lando was a senior producer for CBS’ “60 Minutes,” working alongside the legendary Mike Wallace. Lando, an author who splits his time between Paris and London, recently visited Israel for the first time in some 20 years, with his wife, Elisabeth, who is French. An incident with Israel’s Holocaust memorial and museum, Yad Vashem, cast a shadow on their trip and caused them great distress. “My wife, a Catholic and myself, a Jew, had mistakenly thought that that honor was conferred on Gentiles who had risked their lives to rescue Jews from the Holocaust. We were wrong,” he wrote me. Here’s the story.


Prepared for APN by Orly Halpern, independent freelance journalist based in Jerusale