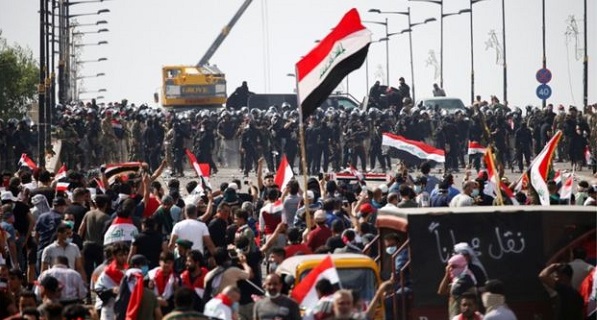 Quote of the day:
"When you read the weekend newspapers, and as someone who has experienced the process whose end was that the prime minister of Israel was assassinated, I cannot help but reflect on the possibility that Yigal Amir 2 is already walking among us."
--Former Mossad chief Shabtai Shavit posted on Twitter Saturday.*
You Must Be Kidding:
"You have to expunge from your identity the term 'settlers' and see yourselves as 'noble pioneers' fulfilling your lost Manifest Destiny."
--Prof. Jason D. Hil wrote in an Op-Ed published in Israel Hayom today.**
Front Page:
Haaretz
Yedioth Ahronoth
Maariv This Week (Hebrew links only)
Israel Hayom

Elections 2019/Netanyahu Indictment News:
A demonstration against Israeli Prime Minister Binyamin Netanyahu, attempts to get 61 signatures from Knesset members to extend the time to form a government, an attack by right-wingers on Arab Knesset member Ahmed Tibi and a rocket launched from the Gaza Strip were top stories in today’s Hebrew newspapers.

Some 7,000 people rallied against Netanyahu at Habimah Square in Tel-Aviv Saturday night, under the slogan 'Resign, the country is more important,’ only days after a similar number of people demonstrated in support of him. Meanwhile, the Likud party was in a race to gather 61 signatures of Knesset members to support Netanyahu to be given another two weeks chance to form a government, after kingmaker and Yisrael Beiteinu chairman, Avigdor Lieberman said he would give his support to both Netanyahu and his opponent, Kahol-Lavan leader Benny Gantz. Lieberman’s party has eight seats. And if all of Netanyahu’s right-wing bloc sign in support of him forming a coalition - along with Lieberman’s party - he has the minimum 61 signatures required. According to Maariv, if Gantz and Netanyahu each get 61 signatures, then the MKs who supported both men will be required to give up one of the signatures.

At the same time, Likud prepared to restart negotiations today with Kahol-Lavan for a  coalition government. [Which is odd, because Kahol-Lavan had earlier given the impression that they would not enter a coalition government with Netanyahu following his indictment - OH.] But Kahol-Lavan said it did not trust the Likud proposal in which Netanyahu will serve for the first few months and then pass the reins to Gantz and it suspected that “Netanyahu was preparing a trap for us.” (Yedioth Hebrew) However, it’s not clear that Netanyahu will receive all the signatures he needs. He won’t the signature of his rival, MK Gideon Sa’ar. Indeed, the Likud party's Comptroller, Attorney Shai Galili, found that the Likud party had misused party resources for Netanyahu’s personal political needs against Saar. The Likud movement published polls and statements against Gideon Saar, Galili found, and he even reprimanded the party's CEO. In a letter from the Comptroller sent to Saar’s attorney, it was stated that Saar was right in his claims and that the said tools should not be used to serve the party against Saar, who himself, is a member of the party. (Israel Hayom Hebrew and Yedioth Hebrew) An Israel Hayom poll published Thursday found that the “Netanyahu indictment has no impact on voters.” It showed that the Likud party under Netanyahu would garner 33 seats if a new Knesset election were called, up from its current 32.

The other big story was that right-wing activists attacked Arab lawmaker Ahmad Tibi at event in central Israel. The Joint List faction member was invited to speak in Ramat Hasharon at a ‘Shabbat Culture’ event. A group of right-wing activists tried to prevent Ahmad Tibi from entering the conference. One of them even hit him with the pole of the Israeli flag he was holding. The police had to intervene to prevent Tibi from being harmed, and even detained one of the protesters. The protesters carried signs saying: “Advisor for murderer Arafat, go home" and "Tibi, you are not welcome here". They shouted at him, “Terrorist, terrorist.” “We are not against Arabs,” they said. “We are against Ahmed Tibi. He has never in his life condemned a terror attack," one of the protesters claimed. [NOTE: This is false. Tibi has repeatedly said he is against violence against civilians. - OH] Another said:" He encouraged and encourages the shahids and congratulates them. His place in Gaza, he should go to Gaza, and drink the sea there.” (Also Maariv and Yedioth Hebrew.) At the event, Tibi said that if the Joint List had joined a minority government (with Kahol-Lavan), one of the Arab MKs would have been murdered.”

*Interestingly, Maariv reported that former Mossad chief Shabtai Shavit warned on Twitter Saturday of a political assassination. "When you read the weekend newspapers, and as someone who has experienced the process whose end was that the prime minister of Israel was assassinated, I cannot help but reflect on the possibility that Yigal Amir 2 is already walking among us. Consider yourselves warned!" Yair Netanyahu responded: "I receive threats, forward them to the police and don’t get a response.”

Other Top News Summary:
After a lone rocket fell inside Israel, landing in an open area and causing no injuries on Friday, Israel struck Hamas posts in Gaza. Yedioth and Haaretz noted that the rocket was launched after Israeli forces shot in the stomach 16-year-old Fahed al-Astal, killing him, when he was protesting at the border fence. Earlier this week, Yedioth/Ynet’s Palestinian affairs correspondent, Elior Levy, reported that there was actually progress between Israel and Hamas over a long-term economic arrangement. Hamas announced Wednesday it was canceling Friday's 'march of return' on Gaza border for the third consecutive week, in what is viewed as a progression in mutual understandings reached between Israel and Hamas, wrote Levy. This week's protests were intended to mark the anniversary of the UN resolution on the establishment of the state of Israel. Also on Wednesday, Israel notified Gaza's fisherman that all boats were now allowed to extend their fishing area to up to 15 nautical miles from shore. And Qatar's envoy Khaled al-Hardan traveled between Gaza and Israel where he met with security officials in what a source estimates were discussions on the long awaited understanding between Israel and Hamas, Levy wrote. On Friday, Hamas sources told Levy that talks were renewed on a long-term agreement.

Features:
Palestinian Shot Dead When Israeli Troops Mistake His Towel for a Firebomb
Omar al-Badawi stepped outside to douse a small fire that started when a Molotov cocktail accidentally struck the wall of his house. At that very moment, Israeli soldiers shot him dead. (Gideon Levy and Alex Levac, Haaretz+)
Cold and alone, Israel’s poverty-stricken elderly brace for winter
In need of assistance, these old men and women who have no families they can turn to, say that feeling cold to the bone is worse than feeling hungry; 'I'm afraid of going to sleep because I'm not sure I will wake up,' says one elderly man. (Amir Alon, Yedioth/Ynet)
Why Jewish Israeli High-tech Entrepreneurs Are Commuting to This Arab Town
Klika QasemHub is the first government-funded co-working facility to open in an Israeli Arab town. It is becoming a role model for a shared Jewish-Arab society. (Judy Maltz, Haaretz+)
Nonprofit seeks to even playing field for Israeli Arab techies
Itworks offers advice and aid to job seekers, including women and Haredim, underrepresented in industry. (Amitai Ziv, Haaretz+)
The man behind Commando Bibi
Meet Guy Levi: The diehard member of the Prime Minister's protest group. He is from Beer Sheva, was the spokesman for Justice Minister Amir Ohana, and today he coordinates from his car the battle, together with the tight-knit group of Bibi admirers. Reporter Amichai Attali accompanied him during the tumultuous week he went through and gained an inside look at the ideology of the Bibists: how, in the end, everything is connected to Mapai (early Labor party that discriminated against Mizrachi/Sephardi immigrants - OH] and where, in their view, is the border between a legitimate demonstration and wild incitement that could end in disaster. (Amichai Attali, Yedioth Hebrew)
Secrets and Lies: Scenes From the 1947 UN Partition Plan for Palestine
A deep dive into the UN archive reveals a lively trade in ideas and plans that were thrown into the ring but ultimately left on the cutting room floor of history. (Ofer Aderet, Haaretz+)

Interviews:
How a Pioneering Geographer Envisions the Israeli-Palestinian Border
How did Israel ‘lose’ Taba? What happens if the Israeli government insists on including every tiny West Bank settlement on the map? Meet Prof. Moshe Brawer, the centenarian and the atlas. (Interviewed by Netta Ahituv, Haaretz+)
Pompeo to Israel Hayom: New policy on settlements will help resolve conflict
In special interview, US secretary of state elaborates on White House's recent announcement on legality of Israeli communities beyond Green Line. Regarding the administration's peace efforts and the political crisis in Israel, he says that he hopes that "before too long we will present our peace vision to the world." (Phone interviewed by  Ariel Kahana in Israel Hayom Wednesday)