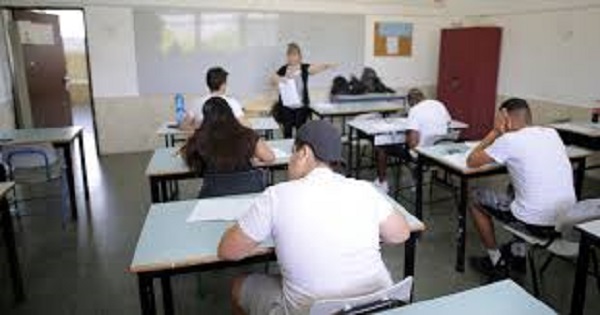 Quote of the day:
"The story here is not a story of money at all. The story is simply that our education system is in fact an accurate reflection of civil society. The litmus paper used as a murky mirror of the visible and covert processes in the State of Israel. A policy whose motto is 'Our situation is good, if you exclude the Arabs and the ultra-Orthodox' is a policy that promotes failure."
--Yedioth commentator Chen Artzi-Srur looks at the enormous gap between PISA test scores of Jewish and Arab pupils in Israel, whereby in math, science and language, Arab pupils are at least three to four years behind their Jewish peers.*
Front Page:
Haaretz
Yedioth Ahronoth
Maariv This Week (Hebrew links)
Israel Hayom

Elections 2019 / Netanyahu Indictment Quickees:
Israel ‘failed’ in the international PISA achievement tests and the leaders of Kahol-Lavan and Likud failed to come to an agreement for a coalition government making the top stories in today’s Hebrew newspapers. Meanwhile, the latest in diplomacy and in police violence.

The papers are quite certain that Israel is going to a third round of elections. Iraeli Prime Minister of the transition government and Chairman of Likud, Binyamin Netanyahu, and Kahol-Lavan leader Benny Gantz met Tuesday afternoon at the former’s request, and the two left blaming each other for the fact that they could not agree to form a coalition government. Kahol-Lavan demanded that Netanyahu give up his bloc of 55 MKs and negotiate only on behalf of the Likud. Netanyahu is equally insistent that he represents all the parties in his alliance. Moreover, Gantz has stated that he would not join a government led by a prime minster who is under indictment and Netanyahu demands to be prime minister for the first six months in a rotation government, despite his indictment in three corruption cases. Maariv titled the article, “Back to the polling stations.” Yedioth called it “On the way to a third round.” Kingmaker, Yisrael Beiteinu chairman Avigdor Lieberman, threatened to join a right-wing government if Gantz didn’t agree to Netanyahu’s demand to let him serve first, indictment and all. Kahol Lavan was unsure whether Lieberman was serious or just trying to pressure Kahol-Lavan. Netanyahu and his rival in the Likud, MK Gideon Sa'ar, are both working hard to collect support within the party ahead of primaries. Yedioth Hebrew reported that Sa’ar gathered “an impressive list of support from local heads of government and gained significant - albeit only hinted at - support from the Samaria Council Chairman Yossi Dagan (West Bank).” Netanyahu, meanwhile, held personal meetings with about 250 Likud members over hours yesterday.

Other Top News Summary:
The terrible scores Israel got on the international PISA exam were big headlines. Not only did Israeli pupils get among the lowest scores, it failed to begin to close the gap between the higher level of Jewish pupils and the lower level of Arab pupils - instead it widened further. The same when for the gap between wealthy and poor pupils and those who live in the center of the country versus those who live in the periphery. (See Commentary/Analysis below for insight as to why.)

Diplomacy (and lack thereof):
France ruled that anti-Zionism is a modern form of anti-Semitism, and Netanyahu flew to Lisbon today to talk with US Secretary of State Mike Pompeo about Iran and annexing the Beqaa Jordan Valley. Yedioth’s diplomatic affairs correspondent Itamar Eichner reported that in Russia, Egypt and Canada there are no Israeli ambassadors because a transitional government cannot approve political appointments. (Yedioth Hebrew) Channel 13 News reported that "The White House is trying to promote non-war agreements between Arab states and Israel.” The US President’s deputy national security adviser met with ambassadors of Oman, UAE, Bahrain and Morocco and examined their positions on a move indicative of getting closer to Israel. (Maariv) Senior security officials have told Netanyahu:: "The (Beqaa) Jordan Valley declaration of annexation is dangerous for peace.” Security officials warned Netanyahu that a popular uprising could break out in Jordan as soon as King Abdullah takes Netanyahu’s statements seriously. It is also expected that Jordan will suspend the peace agreement with Israel. (Maariv)

The incident comes just a couple weeks after a similar incident, where the police were violent towards people who acted towards them like equals, rather than as inferior. In November, a man in the E. Jerusalem Palestinian neighborhood of Issawiya, asked policemen not to park their vehicles on his private property. Walla news website reported that videos from the incident show police beating one of the residents, Adam Masri. His uncle, Muhammad Abu Hummus, appears to be trying to distance the policemen and then afterward is seen on the ground, injured. The complaint lodged at the DIP, by Attorney Tal Hassin of the Civil Rights Association, states that the policeman punched Adam Masri in the face, and then he was by joined other policemen who violently attacked him, knocked him to the ground, dragged him away and continued to strike him all over his body. Masri was then taken to the police vehicle, suffering from pain and bleeding. According to the complaint, he complained that he was having trouble breathing and then a police officer sprayed pepper spray at him. Masri was taken to the hospital for treatment and from there to the police station, where at the end of the investigation it was decided to release him to house arrest. In his complaint, he further alleges that 2,100 shekels disappeared from his wallet which was held by the police. Masri’s uncle, Abu Hummus, was beaten when he tried to help Masri. According to the complaint, "Abu Hummus approached in an attempt to stop the violence, and then several police officers attacked him, hit him and dragged him in the direction of the police vehicle. Abu Hummus was knocked to the ground next to the vehicle and the police continued to beat him all over his body. At some point, he lost consciousness, and woke up under the patrol car and his face was covered in blood. It also says that he was found to have deep cuts and bruises all over his body. Abu Hummus was arrested five days later on suspicion of assaulting police officers, but the court criticized the police and released him. "I have looked at the videos presented to me by the defense and the investigative material collected. I believe there is no need to expand. The videos presented by the defense speak for themselves. Indeed, the videos show that the respondent (Abu Hummus) is not pure as snow. He interfered with the work of the police officers, a job that is not simple and involves a great deal of effort, "Judge Mordechai Kadouri said in his decision to dismiss the police appeal. "At the same time, this is not a disturbance that involves a real assault against the police or an attack to the extent that it can be considered danger.”As a result, Abu Hummus’ complaint also states that the police "reportedly made a false report about the incident and claimed that Abu Hummus was the one who attacked the police." Police did not address the specific allegations and reiterated the message delivered a day after the clashes. Police said in response that "during a police operation in the village, a serious breach ensued that included a violent assault, Molotov cocktails and stones thrown at the police. During that weekend, 24 Molotov cocktails, rocks and fireworks were thrown at police officers at that location,  causing injuries to a female resident of the local area who was evacuated in serious condition. Five people were detained as a result,” police said. (Israeli activist Oren Ziv interviewed Adam Masri who tells the story in English in +972mag)

Features:
Arnon Milchan Law' Turned Israel Into Tax Haven for Billionaires. They Left When It Expired
Controversial law promised ten-year exemption, hoping tycoons would put down roots, remain and contribute – but it just turned Israel into a temporary tax haven. The start of 2017 marked 10 years since a wide-ranging change went into effect that granted new immigrants and returning Israelis exemption from taxes and filing tax statements with the Israeli authorities. The full story of its impact can now be seen as its provisions expire for its first users. (Efrat Neuman, Haaretz+)
5 U.S. Billionaires Who Are Potential Witnesses at Netanyahu’s Corruption Trial
Some superrich Jewish-American businessmen are in line to testify in a Jerusalem court at some point in the future about the Israeli prime minister, including Sheldon Adelson and Larry Ellison. (Amir Tibon, Haaretz+)
The Haifa Neighborhood That Came to Symbolize Dispossession, First of Palestinians, Then of Jews
A new exhibition tells the story of Haifa’s Wadi Salib neighborhood, an icon of the Mizrahi struggle in Israel. (Eness Elias, Haaretz+)

Interviews:
Jews Should Speak Out for Marginalized Communities, Seth Rogen Tells Haaretz
Honored by progressive Jewish group for his activism, the actor-writer makes the case for social justice — and how Jews should be at the forefront of the fight. (Interviewed by Danielle Ziri in Haaretz+)

Trump's anti-Semitism Czar Thinks American Jews Should Be Thanking the President
Special Envoy Elan Carr says America never had leaders ‘this focused and determined’ to fight anti-Semitism, despite escalation in violent attacks against Jews and concerns by the community that Trump is at fault. (Interviewed by Danielle Ziri in Haaretz+)