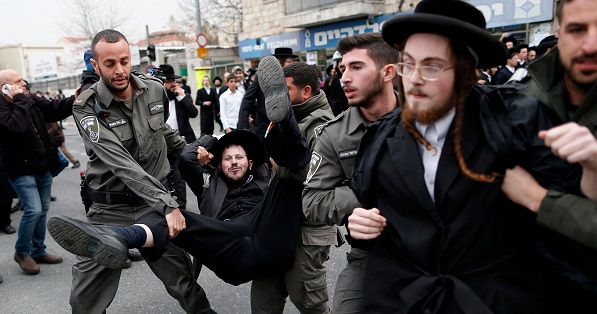 Quote of the day:
"At the end of the day, what will determine whether what we saw is a comedy or tragedy is just one thing: Whether the heroes manage to see, in real time, the Other and his own [version of] justice, not only their own.”
—In a speech following an address by Culture Minister Miri Regev, who said that she was committed to the idea of making public funding for the arts conditional on loyalty to the state and lack of criticism of the occupation, actress Liora Rivlin compared the Israeli-Palestinian conflict to a play.*
Front Page:
Haaretz
Yedioth Ahronoth
Maariv This Week (Hebrew links only)
Israel Hayom

Elections 2019 and Other Top Stories:
A third round of elections are all but official after kingmaker and chairman of Yisrael Beiteinu party, Avigdor Lieberman, reneged on his threats to join a right-wing coalition and told Yedioth he won’t join a narrow government and Maariv reported that in the Likud they said they are done negotiating with Kahol-Lavan. Netanyahu blamed the political deadlock on Kahol-Lavan and said he would win if (and when) a third round of elections are held. Then Netanyahu set off to Portugal, where he met with U.S. Secretary of State Pompeo and made headlines for saying that Israel is in a better position following US redeployment in Syria and that Iran is weakened by protests in the Middle East and he called for tougher measures against Tehran. Haaretz+ noted that the meeting did not yield any concrete steps. Meanwhile, a US warship seized suspected Iran missile parts bound for Yemen and Army radio revealed that for a decade, the Israeli Army inflated the number of ultra-Orthodox that were drafted - sometimes by double - in order to meet draft targets - making the top stories in today’s Hebrew newspapers. The army said it was just a mistake - the commentators said otherwise. (See Commentary/Analysis below.)

Features:
A Dead Spy, Chinese Hackers and the Australian Commando Warning Israel
The Australian intelligence community is going through a stormy period. At the eye of the storm is a deceased young businessman of Chinese descent – and Australian MP Andrew Hastie, chairman of the Parliamentary Joint Committee on Intelligence and Security. Hastie is considered a good friend of Israel, especially of its intelligence and military establishment. Still, he wants Israel to take a much greater role against what he calls “the Chinese threat.” Chinese companies are building Israeli tunnels, ports and more. The government is keen on investment from Beijing, but Hastie says there’s a limit. (Yossi Melman, Haaretz+)
Not just Poland: A new initiative takes students on a journey following the expulsion of (Jews from) Spain
After they returned, the high school youth and teachers recounted the formative experience, which presented to them the dark historical chapter, and the trip that connects the present to the past, and not just that of Eastern Europe and the Holocaust. (Talia Levin, Maariv)
Istanbul, LGBT Paradise
In the great Turkish metropolis, homophobia and gender oppression coexist with an ancient tradition of nonbinary splendor. (Benny Ziffer, Haaretz+)
Refugees in Libya hoped for help from the UN. Instead, they were abandoned
After being let out of prison, some 450 people sought sanctuary at a UNHCR facility in Tripoli, only to learn that the agency doesn't have the resources – and reportedly is trying to starve the migrants out. (Tamara Baraaz, Haaretz+)

Elections 2019/Netanyahu Indictment Commentary/Analysis:
The war on reality (Zehava Galon, Haaretz+) In a column this week in Haaretz’s Hebrew edition, Raviv Drucker suggested that Kahol Lavan’s Yair Lapid give in and agree to have his party enter a Netanyahu-led government, a government that Drucker himself described as“crazy.” If we want to avoid a third round of Knesset elections, Drucker writes, that is the pragmatic option. Here we arrive at the very depths of the bizarre, confused state that Israel currently is in. A leading political commentator is recommending that a politician violate his promise to the public and enter a government headed by a prime minister charged with bribery, fraud and breach of trust. In a crazy world, pragmatism is also becoming a stronghold of insanity.
In Kahol-Lavan they are convinced: Netanyahu is trying to lead them to a trap that ends in elections (Ben Caspit, Maariv) The dilemma in the cockpit of Kahol-Lavan is one of the complexities of Israeli politics. All that Gantz and his people need to do is to look at statistics that never lie. To visit the cemetery of those who negotiated with Netanyahu: Tzipi Livni, Shaul Mofaz, Isaac Herzog, Arnon (Noni) Moses and many others…Despite Netanyahu's clear demise and indictments, it is never known in advance what will happen in the Israeli elections. They will have to make the decision over the upcoming weekend.
After Months of Negotiations, Gantz Believes Netanyahu Less Than Ever (Yossi Verter, Haaretz+) Manipulations and repetitions: Benny Gantz must be watching this stalled process with an ominous sense of deja-vu
Chief of Staff Aviv Kochavi became the real defense minister (Ran Edelist, Maariv) Ever since Caligula appointed his horse to Senator and Ehud Barak appointed Shlomo Ben-Ami to be the Minister of Public Security, there have been no crazy and irresponsible appointments such as (Netanyahu) appointing Naftali Bennett and Avigdor Lieberman as defense ministers. Both were random bricks in Binyamin Netanyahu's survival campaign, taking advantage of his weaknesses, panic and utter irresponsibility regarding the consequences of his actions. Bennett made a hollow threat to make a political alliance with Gantz, and Netanyahu, in a panic, sacrificed the Ministry of Defense. At least according to Yair Netanyahu's tweet on Twitter, Lieberman at the time demanded that Yehuda Weinstein be appointed as attorney general. Whether that is true or false, Weinstein was appointed and in fact he acquitted Lieberman, which paved Lieberman's path to the Defense Ministry a few years later after the removal of Moshe Ya'alon. The advantage is that as soon as Netanyahu transformed the position into a political solution for his survival, Chief of Staffs Gadi Eisenkot and Aviv Kochavi became the real defense ministers.  The moment that Lieberman and Bennett functioned as the prime minister's combat supporters, security considerations also became considerations for political advancement of the defense ministers. Lieberman tried to clean Gaza, failed and resigned before becoming the man who killed (Hamas leader Ismail) Haniyeh with his own mouth. Bennett, from his first days, has been trying to gather votes and has already approved planning a Jewish neighborhood in the Hebron market complex…In Ma'ariv, Tal Lev Ram reported that "at the present time, statements about the need for a new policy against Iran in Syria, a change in the alleged policy in the south, a new policy about the return of terrorist corpses and decisions on construction in Hebron - in such a short period - are drawing criticism on seeming lack of professionalism in various statements due to political considerations.” In general, Bennett did not disappoint. He revealed "a window of opportunity in the weakness of the Iranian regime." Opportunity for what? For another useless attack, or perhaps for a biblical scale G-d redeeming war. So relax. There is a responsible adult.
Blue and White's Bibi trap (Ben-Dror Yemini, Yedioth/Ynet) The centrist party's rush to defend the judiciary's side over the indictment of Benjamin Netanyahu, while ignoring the justly earned public criticism, could drive their moderate right-wing voters away.
For the benefit of Israeli democracy: Netanyahu's cases should be decided upon only when he finally resigns from office (Zalman Shuval, Maariv) The legal conflict that the PM faces is creating obstacles to establishing a stable government, and Kahol-Lavan people probably hope the justice system will grant them what they did not achieve in the elections.

Other Commentary/Analysis:
Winning Over Foreign Dignitaries by Getting Them Drunk on the Holocaust (Gideon Levy, Haaretz+) This tour organized by the Israel Allies Foundation and the Samaria Regional Council provides a glimpse into the Israeli right-wing’s propaganda machine and cynical use of emotion.
Israel's settlements have always been legal (Ken Cohen, Israel Hayom) The Trump administration’s courage in repudiating the nonsensical idea that Jews are legally unwelcome in their indigenous lands should be celebrated by all people with conscience and a knowledge of history.
The Results Are In: Israel's School System Is Sick. Here's Why (Or Kashti, Haaretz+) Israeli students' poor scores in the international PISA test are a wake-up call. But all the wake-up calls won't change a system encumbered by obsolete pedagogical models and sectarianism.
Can Europe Overcome Its Paralysis on Palestine? (Beth Oppenheim, Haaretz+) The EU has a new foreign policy chief. This why he must resist pressure to deepen Europe's relationship with Israel any further.
Inflating ultra-Orthodox recruiting data: A serious breach of trust in the numbers the IDF provides (Tal Lev-Ram, Maariv)  What is even worse in this case is how the data has influenced the decision-making of the political echelon and political discourse in Israel. In the morning, the picture Israeli citizens received was that in the past decade, the IDF was very close to meeting the government's recruitment quotas. Not least, the exposure raises difficult questions about the ability of us, the citizens, to rely on the data presented by the IDF, and on the level of internal control over the data of system data shared with the public, like in any public or business. Apparently, by the time Lieutenant Colonel Telem Hazan arrived, there was no one examine and oversee the data that signed on by a major in the IDF.
Israel Needs a Mutual Defense Treaty With America - Now (Chuck Freilich, Haaretz+) Israel’s defense establishment has always been cool to the idea of a formal pact. But the threats Israel faces have changed: a treaty with the U.S. is an urgent issue of vital strategic importance.
While Iran shoots protesters, Europe schemes to enrich it (Jonathan S. Tobin, Israel Hayom) Tehran’s violence against demonstrators is the worst in 40 years. Yet Europeans chose this week to double down on an effort to evade US sanctions.
What’s Behind the Lull in Israel’s Financial Fight Against Terror? (Hagai Amit, Haaretz+) An announcement by Bennett about an administrative order against a Palestinian ultimately reveals how the Defense Ministry’s fight against terror has been frozen for the past eight months.
There Are Many Reasons to Mock Trump - and Spurn Netanyahu - but NATO Is Not the Place (Anshel Pfeffer, Haaretz+) Trump could actually cause damage to NATO - and the fact is that the alliance needs Israel to coordinate the fight against ISIS, share intel and even train on the F-35.
Prepared for APN by Orly Halpern, independent freelance journalist based in Jerusalem.
comments powered by Disqus