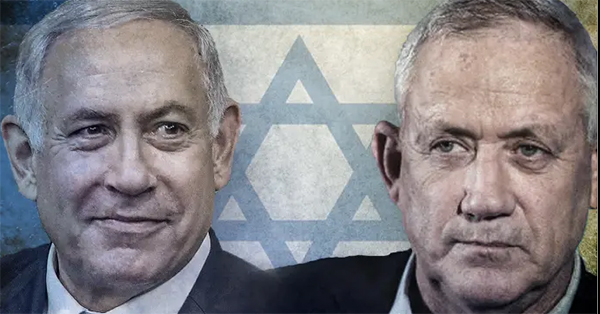 Quotes of the day:
"This is a period of uncertainty and such periods are fertile ground for incitement and hateful voices, fertile ground for discourse that seeks to turn the tables, to make the guards out as rioters, the protectors as attackers, turn falsehoods into truth. They will lie, and we will tell the truth. This is a period that an unprecedented delegitimization campaign is being made against the law enforcement system in Israel. It is a successful campaign in which hatred and incitement are the currency. This is no longer coming from the lunatic fringes of society."
--Deputy Attorney General Dina Zilber said in a speech at the annual conference of the Israel Association for Public Law.*

"Dina's speech was rightly applauded here, but in groups where we have a serious problem of trust it did not achieve its goal - and perhaps the opposite.”
--Deputy Attorney General Raz Nazri said at the annual conference of the Israel Association for Public Law.*

Elections 2019/Netanyahu Indictment News:
Israeli Prime Minister Binyamin Netanyahu called for direct elections, the US State Department refuted a claim by Netanyahu and three rockets were launched from Gaza - and intercepted by Iron Dome - while making top stories in today’s Hebrew newspapers. Also making headlines, on Friday at Palmachim Beach, Israel tested a missile, which Iran said was nuclear and directed at it, and on Saturday, Israel’s Foreign Minister said bombing Iran to stop its nuclear plans was 'an option.’

Kahol-Lavan said Netanyahu’s call for direct elections was meant to deflect attention away from his indictments, and in any case, with just a few days left till the Knesset dissolves, it’s unlikely it will approve any changes in the election method. Labor lawmaker Omer Bar-Lev is trying to collect 61 signatures from MKs to give the Knesset speaker Yuli Edelstein (Likud) a chance to form a coalition government. A Channel 12 News poll found that if elections were held now Kahol-Lavan would pass Likud by one seat. The poll also found that 52% of Israelis believe Netanyahu should resign over the indictments. Yedioth Hebrew reported that more than 70 high-tech entrepreneurs and academics are submitting an urgent petition to the High Court today demanding that Attorney General Avichai Mendelblitt decide - even before the election - whether in view of Netanyahu’s legal situation, he is fit to form a government. Joint List MK Ahmed Tibi predicted that his faction will be strengthened even more in the third elections, Ynet reported. Moreover, Tibi said, “2020 will be the year of impeachment of two people without whom the world will be better - Trump and Netanyahu. We will replace Netanyahu with the election where Arab voters will cast more votes than the last election."

Speaking at a Shabbat culture event in Beersheva Saturday about the impact of Netanyahu's cases on the law enforcement system, former Attorney General Moshe Lador said, "The only coup I see is the prime minister’s against the State of Israel as a state of law.” Lador said “There is a complete system meant to weaken law enforcement on the grounds that the public will decide.” (Maariv)

*But the elections/indictment-related statements that attracted the most attention were those of Deputy Attorney General Dana Zilber at the annual conference of the Israel Association for Public Law on Friday. Zilber called on the public to stand on the side of the law enforcement establishment following the recent attacks against it over the treatment of Prime Minister Netanyahu's cases. "To all concerned citizens - make your voice heard,” Zilber said. "This is a call to civil society, the intellectuals, the silent masses, the media. Now we need you to keep us safe so we can keep you safe from ruling power…This is a period of uncertainty," she said, "and such periods are fertile ground for incitement and hateful voices, fertile ground for discourse that seeks to turn the tables, to make the guards out as rioters, the protectors as attackers, falsehoods into truth. They will lie, and we will tell the truth: This is a period that an unprecedented delegitimization campaign is being made against the law enforcement system in Israel. It is a successful campaign in which hatred and incitement are the currency, this is no longer coming from the lunatic fringes of society. Loyal public servants find themselves [being portrayed - OH] as corrupt, power hungry, revolutionary monsters…Mantras such as 'The officials are stealing the state', ‘Stop the rule of the Attorney Generals’, ‘Corrupt prosecution,’ are spreading and buying hold among parts of the public. Seeds of evil borne in the wind, are awaking unrest, undermining basic conventions." Zilber also said that "the State Prosecutor's office and the Attorney General's Office are not free of mistakes. It is possible to criticize them. But it is not possible to distort the picture because of specific decisions which there is a particular interest in stopping, nor to tarnish the integrity and the professionalism of the system as a whole.” Zilber’s colleague, Deputy Attorney General Raz Nazri, praised Zilber's speech, but disagreed with the sharpness of her remarks. “It implied that we are always right and they, the inciters, are dark people," he said at the conference on Saturday. “Dina gave an excellent, superbly written speech, in which it was evident that it was written from the heart. My problem is the tone that comes from us on these issues. Dina's speech was rightly applauded here, but in groups where we have a serious problem of trust it did not achieve its goal - and perhaps the opposite.” Nazri also said that “we need to remember that the attacks on the Attorney General did not start now, they have been going on for three years on the part of those [who supported speeding up the indictment decision - OH] who claimed that [the Attorney General] was dillydallying in the Netanyahu cases, that he was a collaborator, a conciliator. Also against this it is appropriate to speak out." (Maariv and Yedioth Hebrew)

Marking its 80th anniverssary, Yedioth Hebrew shared a number of essays by people about the front-page story that was most significant for them. In a possible message, Yedioth’s legal affairs correspondent, Tova Tzimuki, chose her story about President Moshe Katzav going to jail in 2011. In today’s paper she wrote: “Former state president Moshe Katzav's criminal sex scandal had occupied the country for several years in the mid-2000s. Katsav, who was a political star at the end of the last century, was a symbol of the integration of the 'Other Israel,' from the periphery, into central politics. He was an immigrant who arrived, after an impressive career in local government, the Knesset and the government, to serve as president of the state. However, the forced ending of his term and the replacement of it for the benches of a prison symbolized for the citizens of the state that there is equality before the law and zero social and legal tolerance for sex offenses, treating women as objects and coercion in a criminal manner."

Top Diplomacy and Security News Summary:
In a move that rebuked the Trump administration’s overtures to Israel’s pro-settlement right-wing and Netanyahu at its head, the US House of Representatives passed a resolution that opposed the Israeli annexation of the West Bank and emphasized the need for a two-state solution. The vote took place just weeks after US Secretary of State Mike Pompeo announced that US administration considers West Bank settlements as legal. Deflecting the rejection of Netanyahu’s right-wing efforts, ‘Israel Hayom’ took a different look on the pro-peace, anti-Netanyahu vote with headlines that said that the ’Squad’ opposed the House's 2-state resolution on Israeli-Palestinian conflict. Rep. Ilhan Omar was said to be unhappy about the inclusion of language committing the US to $38 billion of military assistance to Israel.

Interestingly, it seems like there was some fake news being disseminated supporting Netanyahu.

1. ) The US State Department denied Netanyahu’s claim that he discussed Israeli annexation of the Beqaa Jordan Valley in the West Bank with US Secretary of State Mike Pompeo. Netanyahu had also reportedly said he wants to be prime minister first in a rotation unity government so he can implement the annexation of the Beqaa Jordan Valley in the West Bank that he declared just before the second elections in September. Netanyahu said Thursday that during his meeting with Secretary of State Pompeo in Lisbon last week they had discussed his annexation proposal. Netanyahu said Israel has a ’full right' to annex the valley. Moreover, he denied reports that he agreed to serve only 6 months as premier as part of the rotation agreement with Kahol-Lavan. The ICC chief prosecutor expressed ’concern' about Israeli proposals to annex the Jordan Valley. The US State Department also rejected a report, according to which the US was working to bring Israel and some Arab states closer. It said that normalization "wasn't a topic of discussion" during Pompeo's Thursday meetings with Morocco's Prime Minister.

In other news, Israel conducted a missile test Friday, the Defense Ministry confirmed. Iran’s Foreign Minister Mohammed Javad Zarif said that the test was of a nuclear missile, and that it was aimed at Iran. Zarif slammed the United States, Germany, France and the United Kingdom for not condemning 'the only nuclear arsenal in West Asia.’ Then, on Saturday, Italy's Corriere della Sera printed an interview with Israeli Foreign Minister Yisrael Katz who said bombing Iran to stop its nuclear plans is 'an option.' He also said that “Israel and Saudi Arabia have a common interest.” The Wall Street Journal reported Wednesday that Israel pushed US President Donald Trump to send 14,000 troops to the Middle East. Ynet reported that Netanyahu discussed on the phone with Russian President Vladimir Putin on Friday the situation regarding Iran, Syria and Israel's security needs in order to prevent any friction with Russian forces in the area.

Features:
Gideon Levy: These Boys Would Have Made It Home After School, if It Weren't for Israeli Sniper Fire
Two children, aged 11 and 13, from a refugee camp near Ramallah, were hiding from army forces during a stone-throwing incident. When they stood up they were wounded – shot from a distance by an IDF sniper. (Gideon Levy, Haaretz+)
Could future US administration undo Trump’s policy on Israeli settlements?
More than 100 Democratic lawmakers sent a letter to US Secretary Mike Pompeo, expressing "strong disagreement" with the State Department’s new policy and urged him to "reverse this policy decision immediately." (Israel Kasnett, Israel Hayom)
Operation Israeli citizen
Border Police officer Jamaysa Yael Bontong was born in Israel 20 years ago to a Filipina mother and Thai father, but never had Israeli nationality; when her commanders discovered that she wasn't a citizen, they embarked on a mission that ended in a very special ceremony. (Meir Turgeman, Yedioth/Ynet)