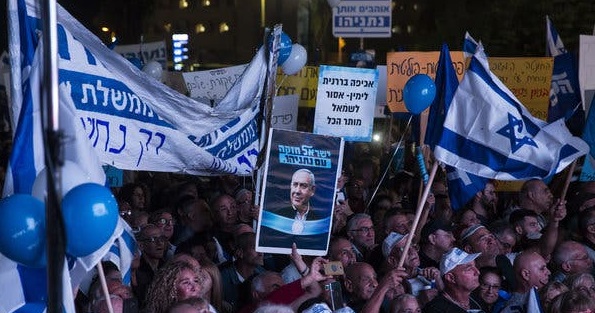 Quote of the day:
"Netanyahu did not work to sow seeds of compromise, to produce reconciliatory rhetoric or charge at the rifts before they expand into a chasm. He took advantage of these failures to increase his power."
--Commentator Nadav Eyal writes in Yedioth that the first challenge facing leaders in the post-Netanyahu era will be to deal with the hatred in society and the way in which public debate is conducted.*
Front Page:
Haaretz
Yedioth Ahronoth
Maariv This Week (Hebrew links only)
Israel Hayom

Elections 2019/Netanyahu Indictment News:
Throughout the night, the motion to hold snap elections passed the final readings and the Knesset approved holding a new election for March 2nd, the third trip to the polling stations in less than a year - making today's big story.

After Kahol-Lavan leader Benny Gantz announced Tuesday that he was willing to negotiate with Prime Minister Binyamin Netanyahu to form a coalition government before the Wednesday night deadline - if the latter would not request immunity from being put on trial, Netanyahu consulted with his attorneys over whether it would be a legally wise move. Apparently, they did not think so, because the Knesset vote to hold elections went forward.

The papers were all appalled, but viewed it differently. Yedioth didn’t take sides. It called the move ‘shameful' on its front page over the photos of Netanyahu, Gantz and Avigdor Lieberman, the kingmaker. However, Maariv printed on its front page an Op-Ed by Ben Caspit, who wrote that Netanyahu’s ‘magic expired,’ and Haaretz blamed Netanyahu by printing Yossi Verter’s Op-Ed on its front page. The pro-Netanyahu newspaper, ‘Israel Hayom,’ did not blame anyone and seemed to blame the Knesset as a whole, sharing a photo of the Knesset assembly. (See Commentary/Analysis below.)

The papers noted how the public suffers from the numerous elections: “Patients parked in hospital hallways, people left without medication, and children left out on the street (while) the MKs bicker among themselves, and 9 million people are left to face the fallout,” wrote Ynet. Yedioth Hebrew’s Gad Lior wrote that the three elections will cost Israel a total of at least US $3.5 billion.

Meanwhile, Netanyahu and his Likud rival, Gideon Saar, agreed to hold primary elections for the Likud leadership on December 26th. Saar said that there will be other Likud MKs who will support him once the primaries are approved tonight. (Maariv) However, Netanyahu loyalist MK David Bitan said he was working on obtaining enough signatures to to cancel the primaries by secret ballot at the Likud Central Committee meeting tonight. (Maariv)

Netanyahu called on voters to give him support in the March election: "To prevent further elections, we have to win big - and that's what we will do,” he said. MK Bitan said in an interview that "Netanyahu is getting his last chance. He will have to do the job and bring it in. If he doesn't get 61 seats (from Likud and right-wing), he won't be able to form a government again next time. Now we get another chance and we have to grab it with two hands.” Bitan expressed belief in Netanyahu’s ability to get support, despite the indictments. “There is no doubt that Netanyahu will bring the mandates. If he is ousted from the Likud, ten seats will not vote for Likud. Replacing Netanyahu and expelling him from the party does not serve the party.
There are no Likudniks who dislike Likud because of Netanyahu's indictments,” he insisted. However, he noted that “if Netanyahu fails to bring in 61 seats, we will either be in the opposition or we will have to rethink.” (Maariv)

Today Yisrael Beiteinu chief, Avigdor Liberman said he would support pardoning Netanyahu in exchange for Netanyahu’s retirement from politics. He claimed he doesn't want to see Netanyahu in jail.

Outgoing State Prosecutor Shai Nitzan said in an interview that Netanyahu must stand trial regardless of him serving as prime minister. "According to the indictment, over a few years, he received 700,000 shekels worth of champagne and cigars, a fair amount by all opinions. Suppose there was a public figure who was, let’s say, a rapist. And you would say, ‘But most of the public voted for him.’ So what does that mean? That we are going to a people’s trial and if the public, as in ancient Rome, approves, then he won’t be prosecuted and if not, then he will be executed? It does not work that way in the modern democratic method. What I am comparing is that it is impossible to make legal decisions according to a reality program - where the public votes yes or no,” said Nitzan. (Maariv) Netanyahu responded saying, “It’s shocking he used rape victims to justify the hunt against me.”

Following a High Court petition by The Movement for Quality Government, which requested he resign from the ministries due to his indictments as was ruled in the past, Netanyahu told the High Court he would resign from all ministerial posts by January 1st, except for prime minister.

Features:
In Israel’s Top Court, a Test Case for the Rights of Patrilineal Jews
Widows and widowers of those born to Jewish fathers and non-Jewish mothers are being denied the immigration rights afforded to those who were married to matrilineal Jews — and it could have consequences for American Jews. (Judy Maltz, Haaretz+)
"It's a slap in the face": The (Druze) children who will be forced to leave the schools in Haifa
After the Haifa Municipality's decision that only Haifa students can study in the city, the children, whose fathers serve in the country’s security branches, talk about their bad feelings: "It is upsetting and insulting.” Eyal Alu, 12, from Usafiya town: "I feel like I'm being expelled from the city of Haifa, disconnected from everything I know, as if I'm different from the other children. I don't want to be cut-off from Jewish culture. What's wrong with me? What's not right about me? How am I different?" (Sigal Ben David in Maariv magazine supplement, pp. 4-5)
U.K. Election: ‘Thanks to Corbyn, There’s Never Been as Much Unity Among British Jews’
Baroness Julia Neuberger literally wrote the book on anti-Semitism. While she is skeptical of claims that U.K. Jews will leave if Jeremy Corbyn becomes prime minister, she is adamant that the community shouldn’t vote for him in Thursday’s election. (Judy Maltz, Haaretz+)

Interviews:
From the Gaza Border to Oxford: Israel’s New Rhodes Scholars Love Their Country but 'Reject Hasbara Approach'
Lev Cosijns and Anat Peled both served in the Israeli army and have a shared love of Harry Potter. But that’s where the similarities end for this pair of impressive young students. (Interviewed by Allison Kaplan Sommer in Haaretz+)

'I hope Jews who left can come back to Venezuela,' minister says
Julio Borges, the foreign minister of Venezuela's shadow government says renewing diplomatic ties with Israel, severed in 2009, is a top priority for President Juan Guaidó. (Interviewed by  Shlomi Diaz in Israel Hayom)