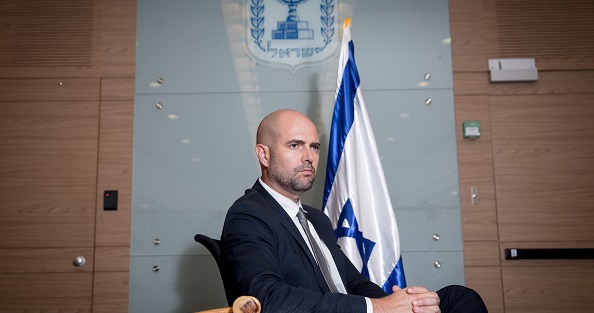 Quote of the day:
"(Justice Minister) Ohana decided to stomp on the appointment process of the acting State Prosecutor, using the guise of naively saying it was his authority. He ignores the fact that the Knesset did not imagine it would ever need to legislate a law that would break the judicial legal public crisis like the one that exists today. Ohana also signals that strategically, he or his replacement, if Netanyahu wins the third election, will charge at the fortress - the head of the State Prosecution. In a paraphrase of Leonard Cohen: “First we’ll take the State Prosecution, then the Attorney General."
--Yedioth legal affairs analyst, Tovah Tzimuki, writes in today's paper about the Justice Minister's controversial decision to appoint someone 'contentious,' low ranking and not who the Attorney General had proposed.*
You Must Be Kidding:
“Safety reasons.”
—The reason the Jerusalem Municipality gave for removing a sign it had posted at the entrance to the Christian Quarter of Jerusalem's Old City wishing all the Christian residents “a Merry Christmas and a Happy New Year." In its place a new sign was placed in honor of Hanukkah.**
Front Page:
Haaretz
Yedioth Ahronoth
Maariv This Week (Hebrew links only)
Israel Hayom

Elections 2019/Netanyahu Indictment News:
Justice Minister Amir Ohana sparked a storm with his appointment of Orly Ben-Ari as acting State Prosecutor, in opposition to Attorney General Avichai Mendelblitt who chose someone else. Meanwhile, Israeli Prime Minister Binyamin Netanyahu and his Likud rival, Gideon Saar, began campaigning hard ahead of the vote over the Likud party leadership next week.

Attorney General Mendelblit said the appointment of Orly Ben-Ari Ginsberg is extremely unreasonable, and that there would be legal impediment to approving it. (In the meantime there was an appeal to the High Court and the swearing-in was frozen. - OH) One of the most interesting parts of today’s papers were the analyses by the papers’ legal commentators about why Ohana chose this particular prosecutor, one who is now the boss of the prosecutor who was her boss at the Central District Court. (See Commentary/Analysis below.) The question was whether Ben-Ari would have access and influence over Netanyahu’s criminal cases. According to Tovah Tzimuki, she will. (Tzimuki wrote a very interesting analysis about motivations. - OH) According to Haaretz, Mendelblitt can and will bar her access to the Netanyahu cases.

The newspapers also had juicy tidbits to share about Mrs. Ben-Ari and why she was perceived as the wrong choice. Haaretz+ called her a ‘contentious figure’ and quoted a legal source who said, “More than once we wondered when she expressed an opinion whether it was purely a legal opinion or whether it was part of a move in other areas. That’s a shame because she’s an excellent prosecutor.” Another person who knows Ben-Ari said: “From the legal standpoint, she’s no different than the other prosecutors. … She never did things differently, so it’s not clear what he expects her to do differently.” Maariv wrote that she had a “murky relationship with the man she is replacing, Shai Nitzan. She called the outgoing State Prosecutor "Hitler" and “Al-Qaeda.” She served in the IDF intelligence unit 8200, where she also learned Arabic. Yedioth wrote that she was hawkish on security issues. She worked on sensitive cases such as the Tali Fahima affair, which Fahima admitted contact with a foreign agent, and the Prisoner X affair, about the Australian Ben Zygier who served in the Mossad, gave away secrets and was secretly imprisoned by Israel and died in detention. When she met with Mendelblitt after her appointment, she expressed her disappointment with his chilly reception, to which he said: "It's not personal, I will fight the appointment.” In a video interview on Ynet, Yedioth’s veteran judicial affairs reporter Tovah Tzimuki called the decision “sticking a finger in Mendelblitt’s eye with the intention of destabilizing morale and authority of the State Attorney’s Office.

Maariv reported that Netanyahu is doing a lot of field campaigning in the eight days left before the vote for the leadership of Likud. Both men’s campaigns are centered on continuously uploading "aggressive videos" on the social media networks against Kahol-Lavan and the Left-wing in an attempt to make them viral, the paper reported. “The media polls are lying," Netanyahu said in a video released yesterday. "We're going to win big in the Knesset elections. We see it enthusiastically on the ground. This time, we won’t let Gantz unite with (Arab MK Ahmed) Tibi. And this time we won't lose any votes on the right. Don't let the media and polls fool you. Only you will determine. Nobody else.” Saar is trying to portray himself as the savior of the right-wing at the ballot box. He released a video yesterday titled "Victory for Saar, nightmare of the Left." Netanyahu's supporters in the party, among them Culture Minister Miri Regev and Foreign Minister Israel Katz, lambasted Saar for running against Netanyahu, to which Saar said: "They're trying to brand anyone who dares to offer an alternative," he said. "I'm even more right wing than Netanyahu."

Ironically, Saar demanded that cameras be placed at the Likud polling stations. He turned to the Likud court after the party was not responding to his request. As may be remembered, Netanyahu and his Likud colleagues in government pushed hard to put cameras in polling stations in the Arab sector, claiming that many Arab citizens make illicit votes. It turns out that there is great concern that the Likud voters will cheat. Maariv reported that Netanyahu agreed to Saar’s request: “It will help the purity of elections.”

Meanwhile, veteran Likud MK Benny Begin called on Netanyahu to resign. "It is not only a legal question - there is an educational and moral aspect. One cannot treat the indictment as if it were rain - he cannot be prime minister," Begin said. And in the town of Yarka, Druze activists planned to demonstrate in protest of the Jewish Nation State Law during Netanyahu's visit, Maariv reported. Dr. Amir Hanifas, received threats to his life. Hanifas had organized the protest against Netanyahu and the Nation State Bill,

Other Top News Summary:
In other news, Maariv reported that Israeli security in the south was on alert for a response after the army killed an “armed terrorist” in Gaza when he walked near the border fence. (VIDEO) Ynet also noted that 2,200 people protested at several locations along the Gaza border last Friday (NOTE: That is a relatively small amount and shows that Hamas is keeping its side of the agreement - OH)

Also of interest, Congress rejected a request Monday for $175 million to support US President Donald Trump's 'Deal of the Century’ and a source told Haaretz that skepticism about the plan's release contributed to the decision. Then on Tuesday, Congress agreed to give $150 million in aid to the Palestinians, defying the Trump Administration. Half goes to the Palestinian Authority security forces and half to civilian and humanitarian programs, the latter which the Trump Administration had completely cut-off. Oddly, Israel Hayom reported that the House passed a bill with $3.3 billion for Israel, Jewish-related priorities and wrote that “no US aid will go to the Palestinian Authority.”
Quick Hits:

Features:
Terror village
The Jerusalem neighborhood of Jabel Mukaber, next to Armon Hanatziv, has been a hotbed of terrorism since the Second Intifada. Is it because the residents are poor and desperate? Not really – many of the Jabel Mukaber terrorists come from well-off families. [NOTE: This article does not seriously examine the reasons that numerous young residents make attacks against Israelis for which in most cases they know they will be killed. The writer interviews a Jewish ‘experts’ and only in the very last paragraph does he interview a ‘well known figure in the village’ - probably by phone. It appears he did no ground work, because he had interest in hearing from the people themselves. Shame. - OH) (Nadav Shragai, Israel Hayom)
Soccer between the West Bank and Gaza
Football at the Palestinian Authority level is unlike what is happening with the national team, which has made significant improvements thanks to the invitation of players with Palestinian roots from around the world - it even participated in the last two Asian Championships. Due to geographical and security restrictions, there are two separate leagues [in the Palestinian Territories]: the West Bank, which is stronger, and the Gaza Strip, both are considered relatively inferior to the Asian Football (soccer) Association. The Gaza Strip champion does not participate in the onshore competitions, while the West Bank champion plays only in the Asian Cup - the equivalent of the European League - and not in the Asian Champions League. To reach the Champions League stage, Hillel al-Quds team from East Jerusalem has to go through a playoff with a senior opponent. In January, the team will be waiting for a pair of matches against Sur, the Omani Cup holder. Hilal al-Quds is considered the top team in the West Bank and has won the last three championships, but this year things are not going well for the team, which ranks only sixth out of 12 after nine rounds…In a way that is reminiscent of the teams in Netanya and the Moshava, the West Bank also does not have a sufficient amount of proper soccer fields, and the clubs are divided between them. The Faisal Hussein Stadium in A-Ram (E. Jerusalem) is the busiest, and Hussein Ben-Ali Stadium in Hebron also hosts more than one group. Some of the most prominent names in the league are players who grew up in Israeli soccer clubs, such as the Palestinian national goalkeeper and Hilal Rami Hamada, who grew up in Maccabi Netanya. For those players, it is an opportunity to get regular minutes after not finding themselves in the Israeli senior leagues, and thus try to get back there and maybe even go higher on the Palestine national team. In this context, midfielder Ayman Harbat, who grew up on the Beitar Tubruck team in Netanya, excelled last year on Jabel Mukaber team and signed in Kfar Saba - but he isn’t playing because of a serious knee injury. (Yair Kattan, Yedioth Hebrew sports)

Interviews:
'For the first time, I'm ashamed to be a politician'
Former Justice Minister blames Blue and White for the third round of elections, and says that people are being hurt by the ongoing political crisis. (Interviewed by  Gideon Allon in Israel Hayom)