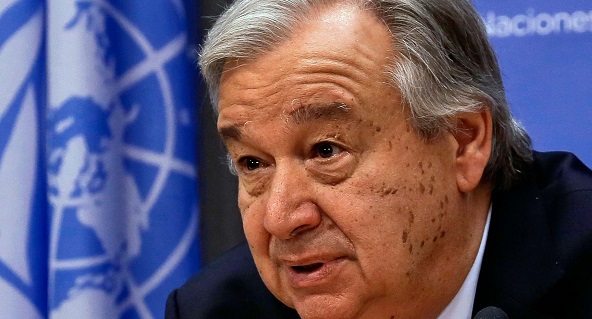 Quote of the day:
“The existence and expansion of settlements fuel resentment and hopelessness among the Palestinian population and significantly heighten Israeli-Palestinian tensions. In addition, they continue to undermine the prospects for ending the (Israeli) occupation and achieving the two-state solution by systematically eroding the possibility of establishing a contiguous and viable Palestinian state.”
--U.N. Secretary-General Antonio Guterres said Wednesday.*
Front Page:
Haaretz
Yedioth Ahronoth
Maariv This Week (Hebrew links only)
Israel Hayom


Top News Summary:
In today’s top stories in the Hebrew newspapers: one controversial appointment was frozen by the High Court, 46 Israelis were detained and delayed at an airport in Russia for hours and 50 Palestinians were detained on suspicion of involvement in attacks on Israelis - and among the detainees was Khalida Jarrar, a 56-year-old female parliamentarian. Some of the papers succeeded in reporting on the passing of former firebrand MK and pre-state fighter Geula Even, last night at the age of 93. In diplomacy, Prince Charles and US Secretary of State Mike Pompeo will both be attending a Holocaust-related event in Israel next month.

In the latest scene of the drama over the controversial appointment of junior prosecutor Orly Ben-Ari by Justice Minister Amir Ohana in opposition to the proposals of the Attorney General, the High Court froze the appointment minutes before Ben-Ari was sworn in at a large ceremony, leaving her and her family and Minister Ohana in shock. Attorney General Avichai Mendelblitt said he would not compromise on the matter of the appointment.

In Russia, 46 Israelis were detained at Moscow's Domodedovo Airport airport, questioned and held for hours before being allowed to continue on, just a day before an Israeli delegation was expected to arrive in Russia for "consular consultations," which were scheduled in advance. The papers said the delays were a signal to Israel that Russia is unhappy with the Israeli questioning of Russian citizens by Israeli airport security and the deportation of about 20 Russian tourists every day, which Russian authorities have complained about recently.

In the West Bank, the Shin Bet detained 50 Palestinians, members of the Popular Front for the Liberation of Palestine (PFLP), who allegedly were involved in attacks on Israelis, including the murder of Rina Shenrav in August. Among those detained was former Palestinian lawmaker Khalida Jarrar, who was released from Israeli prison earlier this year.

Features:
‘Fake Halos’ and Mystery: Removing the Mask From Israel’s Famed Mossad Spy Agency
The new three-part documentary by Amit Goren, who also heads a controversial film foundation, begs the question, ‘Is it right for an organization like the Mossad to be controlled by one person – a prime minister?’ (Itay Stern, Haaretz+)
Hanging out to dry: Lone soldiers suffer long wait until enlistment date
New immigrants who arrive to Israel as lone soldiers are now forced to wait for over a year until they can finally enlist. (Hanan Greenwood, Israel Hayom)

Elections 2019/Netanyahu Indictment Commentary/Analysis:
If you come for King Bibi, you better not miss (by more than 30 percent) (Anshel Pfeffer, Haaretz+) Though Netanyahu’s victory over Gideon Sa’ar in the Likud primary is all but assured, it is still a crucial election for determining Israel’s next prime minister.
Ohana, Take the Attorney General's Advice (Haaretz Editorial) Ohana has to understand that the suspicion aroused by the appointment of Ginsberg Ben-Ari is natural. The State of Israel is in an unprecedented situation, in the midst of a third election campaign and trapped in a political dead end because of the legal predicment of Prime Minister Benjamin Netanyahu, who is facing three indictments for bribery, fraud and breach of trust. Under these circumstances, how can the public accept the appointment of someone in a relatively junior position – deputy Central District district attorney – against the attorney general’s position and the opinion of Civil Service Commissioner Daniel Hershkowitz? What’s more, the appointment is being made by a minister in a transition government who has repeatedly castigated the judicial system, and the public atmosphere is rent by a battle between the branches of government being conducted by the prime minister himself.
It's easy to hide behind names, it would have been appropriate for the State Prosecutor’s Office to give Ben Ari backing (Attorney Uri Keenan, Maariv) The new acting State Attorney is most deserving of the position, despite the unsheathing of the system's long swords and knives. How did Ohana dare to appoint an attorney who is not considered “one of us“?
Attack on State Prosecutor Appointment Exposes the Real Fear of Israel's 'Old Elite' (Gideon Levy, Haaretz+) In the end, the names say something: Mendelblit, Hershkowitz, Kremnitzer, Nitzan, Lemberger and Zilber vs. Ohana, Bitan and Amsalem. A kind of coincidence. But all the denials won’t help. This isn’t an exaggerated interpretation. The names speak like a thousand witnesses. A bystander sees Ashkenazim blocking Mizrahim – all wrapped in purely legal, democratic and professional arguments – and he concludes what we cannot avoid concluding: Alongside all the other struggles, there is a bitter, bloody and devastating ethnic struggle here that refuses to die, that is far from being resolved…Another justice minister at a different time would have been forgiven Ben-Ari’s appointment; he might even have been praised for thinking out of the box, for being unpredictable, for being a gay minister who chose a woman for a senior position. But now suddenly Avichai Mendelblit, Shai Nitzan and Daniel Hershkowitz are the fearless gatekeepers of democracy, a rare, Israeli-style combination of Andrei Sakharov, Martin Luther King, Jr. and Rene Cassin, the Just-Not-Netanyahu camp’s heroes of the hour. Nitzan, who arrogantly permitted so many war crimes without blinking, is now the hero of the left…The ethnic aspect will of course be hidden and repressed. It’s not politically correct in either camp to talk about it. But there is still an ethnic struggle here. The whitewashed code name is the “new elites” vs. the “old elites.”
Turbulent waters: Israel needs leadership with proven experience (Zalman Shoval, Maariv) Some politicians and media outlets are trying to obscure this, but Israel faces a period  full of dangers, especially in the area of political security.
The anarchy of Netanyahu's adversaries (Aharon Gerber, Yedioth/Ynet) The prime minister's opponents are willing to disregard the Basic Laws as they try to set legal precedent that will send him home; it's no wonder that public confidence in the rule of law has been greatly diminished.
A victory for Gideon Saar in primaries will be a national catastrophe (Ran Edelist, Maariv) In fact, Saar is worse than Netanyahu. As mentioned, his campaign is a contribution to the national interest by having the potential to help unravel the Likud. But a victory for Saar is a national catastrophe. Anyone who started his campaign in Umm al-Hiran and calls for annexation and construction will continue his path in the extreme right. His advantage over Netanyahu is his appearance as a vegetarian clerk who is credible, as opposed to Netanyahu whom no one believes, including Netanyahu himself, who does not believe himself. As far as the right-wing bloc is concerned, Saar has the credit and the good manners to continue and pull the wool over the world’s eyes. And guess who was the first one to embrace Saar? Correct. Samaria Council Chairman Yossi Dagan. I don't know if Sa'ar believes in the ultra-patriotic-nationalist-religious sentences he emits. I clearly know that anyone who needs the bloc's bear hug, like Netanyahu, has to suck up to the block and not the of the law enforcement and legal systems.
Arab Knesset members must adopt coexistence policies (Ephraim Ganor, Maariv) The Joint List may record unprecedented success in the upcoming elections. The question is what will its representatives in the Knesset do with their political power.

Other Commentary/Analysis:
Israel's Reckless Policy Buried This Palestinian Family. Their Story Was Buried Too (Zehava Galon, Haaretz+) In a chilling series of stories, Yaniv Kubovich revealed in Haaretz how the air force’s “bank of targets” is put together. Kubovich exposed how a decade of living with a policy that sees blockade and cyclical rounds of armed clashes as a reasonable solution has created constant pressure to provide new targets; how the army rewards the identification of new targets and the stunning ease with which old targets are re-approved; how no one checks what’s happening at the target right before planes are dispatched to drop a bomb in the midst of a civilian area; how, in short, the surgical pilot so praised by our propagandists has been shown to be a surgeon with unsteady hands. The Sawarka family in Gaza no longer exists. Nine family members, two of them babies, fell victim to this reckless policy. Somewhere there is a pilot and an intelligence officer who have to live with that. One can’t know how many more Gazans have paid with their lives for the offhandedness with which we’ve decided we’re permitted to drop bombs. “We’ve erred, we made a mistake, what can we do?” is the perennial answer given for every additional resident of Gaza whose life was cut short. Someone more pedantic may add a verse from Proverbs: “He who admits ... shall have mercy.” But it wasn’t a mistake. It wasn’t negligence. It was indifference – we casually played with fire and people died.
Israel fears fallout of Qatar freeze on Gaza aid (Alex Fishman, Yedioth/Ynet) Gulf state's assistance pulled Hamas-run enclave out of depression after PA suspended funding, bringing improved infrastructure and hopes for better standard of living, but halt to Qatari funds could lead to escalation on Israeli border, kill chances of long-term calm.
How Israel's Conflict With Iran Will Be Different in 2020 (Amos Harel, Haaretz+) As Netanyahu's associates talk about an Iranian effort to deploy a ring of fire around Israel, a think tank is skeptical about the chances for a truce with Hamas.
#MeToo reaches Arab society (Jalal Bana, Israel Hayom) A social media campaign by Arab women's groups is providing victims of sexual harassment and assault with a chance to hold men accountable for their conduct toward their female colleagues and subordinates.
Why Prince Charles’ Official Visit to Israel Marks a 'New Phase' in U.K.-Israeli Relations (Danna Harman, Haaretz+) Heir to the British throne’s trip in January follows previous visit in June 2018 by his son, Prince William, and aims to duplicate that tour’s success.
Progress on 'the Jewish question' (Clifford D. May, Israel Hayom) While anti-Semites suffer defeats in the UK and the US, Jew-hatred, an ancient and shape-shifting pathology, is on the rise almost everywhere, often with lethal results.
Fight against BDS is far from over (Prof. Eli Avraham, Israel Hayom) We tend to see this struggle in absolute terms of victory and defeat, but BDS supporters believe that even if they lose a bid, the mere fact that they gout to malign Israel means that they have won.
Can U.S. Jews Be Protected by Trump, a President Who Spouts Contempt for Jews? (Eric H. Yoffie, Haaretz+) Should Jews rattled by shooting attacks be grateful for Trump's executive order on anti-Semitism, when days earlier he unleashed a barrage of insults against them? What if it means sacrificing free speech on Israel and Palestine?
Combating anti-Semitism without stifling free speech (Alyza Lewin, Israel Hayom) Applying Title VI of the Civil Rights Act of 1964 to Jews is not new. It is the "adoption" of the IHRA Definition of Anti-Semitism that is causing all the ruckus.
The ugly truth about campus anti-Semitism and BDS (Jonathan S. Tobin, Israel Hayom) While some on the Left disparage Trump’s executive order, research uncovers the common ground shared by the BDS movement and the far Right, as well as terror supporters.