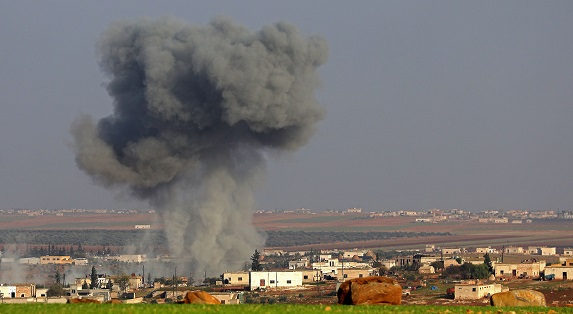 Quotes of the day:
"It was very exciting and it smashed stigmas. I fell in love with Saudi Arabia and with Saudis."
--An Israeli man who was interviewed after watching the screening of a Saudi film at the Jerusalem Cinemateque. The Israeli Foreign Ministry uploaded the Israelis' reactions to its Arabic social media profiles and got excited reactions from the Saudis.*

"I am shocked by the positive reactions of the Israelis. Maybe because of the younger generation. I want to believe that the reactions were not dictated (in order) to bring the peoples closer together."
--Juwaher, a Saudi female wrote on the Israeli Foreign Ministry's Arabic social media profile in response to the video clip of Israelis who reacted positively to a Saudi film they saw at the Jerusalem Cinemateque.*
Breaking News:
Syria says it intercepted missiles fired from Israel; 3 foreign nationals killed in IDF strike in Syria
Four cruise missiles were said to have been launched across the coast through Lebanese airspace toward Syria. Monitoring group says attack before midnight targeted Iranian and Syrian military positions near the capital. Three foreign nationals, believed to be Iranians, were killed. (Haaretz, Ynet and Israel Hayom)
Front Page:
Haaretz
Yedioth Ahronoth
Maariv This Week (Hebrew links only)
Israel Hayom


Top News Summary:
Israel's High Court will decide next week if an indicted prime minister is allowed to form a government, a bus crashed into a bus stop killing four people and a minibus transporting Palestinian laborers crashed into a truck killing two of the West Bank laborers in separate accidents yesterday, and there were more reactions to The Hague prosecutor’s announcement that there is a basis to investigate Israel for war crimes in the Palestinian Territories - making top stories in today’s Hebrew newspapers.

For Israel Hayom newspaper, today's main story was the High Court debate over whether Israeli Prime Minister Binyamin Netanyahu can form a government, despite being indicted in three cases on flagrant offenses. And their answer was clear in the headline: a quote by Netanyahu saying, “The one who decides who will lead the people - is the people.” Interestingly, Netanyahu’s Likud rival, Gideon Sa'ar, agreed with Netanyahu. "It is wrong for the High Court to intervene on the issue, the law is clear. A prime minister is not replaced in the courtroom, but at the ballot box.” (Ynet Hebrew) Attorney General Avichai Mendelblitt, who had avoided addressing this issue last week, was now ordered by the High Court to submit a legal opinion on the matter 48 hours before the court debate on December 31st. Miki Zohar, the Knesset Likud whip, semi-threatened the court, saying that if it decided Netanyahu could not form a government then this would lead to legislation allowing the Knesset to override the courts.

Speaking in Jerusalem at the Wailing Wall of the first Hanukkah candle, Netanyahu slammed the ‘anti-Semitic decrees’ of the Prosecutor of the International Criminal Court (ICC), falsely claiming that it tells Jews “in this city, in this land, that we have no right to live here, and that if we live here we commit war crimes.”  While the ICC wants to investigate the settlement of Jews in occupied land, i.e. the West Bank, as a war crime, it never said that living in Israel proper was a war crime. Interestingly, Netanyahu requested Sunday to put a gag on all debates about the ICC probe. The cabinet agreed and all further debates will be held within the Security Cabinet, Yedioth reported. Yedioth also reported that Israel intends to enlist the assistance of other countries who share some of the same concerns over the precedence of an inquiry into a western democracy with a viable legal system. And mayors of Israeli communities near the Gaza border slammed the ICC prosecutor,  saying, ”We are victims of war crimes.” Yedioth, which yesterday splashed across the front page that the probe was "hypocrisy," went looking for dirt on the ICC Prosecutor, Fatou Bensouda. It believes it found it: Bensouda served for four years as Justice Minister and State Prosecutor under the Gambian dictator, Yahya Jammeh, who went into exile in 2017. Jamme came to power in a military coup in 1994. Yedioth reported that in 1996 he appointed her State Prosecutor and later Justice Minister. Yedioth noted that Bensouda's detractors say she should not serve in the Hague after serving under Jammeh, while others says that she fought for women's and human rights and that was the reason he fired her after four years.

Haaretz+’s Noa Landau wrote a fact-check on Israel's response to the ICC prosecutor's call to probe, noting that “Israeli media and officials were quick to spread false conclusions.” And Maariv translated and printed the JPost’s Tova Lazaroff article about “Ten things to know about the ICC’s war crimes probe against Israel.”

Features:
*Video clip by the Israeli Foreign Ministry excited the Saudis: "Come visit us"
This week the Saudi movie, "The Perfect Candidate,” was screened in Israel. The film, which deals with the social complexity experienced by Saudi women, opened the first women's film festival in Jerusalem. The Foreign Ministry interviewed people when they left the film screening in order to share it with the hundreds of thousands of Saudis who follow the Israeli Foreign Ministry’s Arabic social media pages. The Israelis expressed great excitement over the movie. Many said they had learned new things about the kingdom, Islam, and the changes in the status of women in the country. "It was very exciting and it smashed stigmas. I fell in love with Saudi Arabia and with Saudis," said one Israeli interviewee. The Israelis praised Saudi director Haifa Al Mansour and the lead actress, and they expressed hope for a future visit to Saudi Arabia and peace between the countries, and even sent a message to the Saudi people: "We are much more similar than you think." Saudi followers of the Foreign Ministry's pages on social media networks, especially on Twitter, were very moved by the Israeli's comments in the video and some admitted that they were surprised to see such positive statements by Israelis towards the Saudis. "These are beautiful and positive things from our cousins and Inshallah there will be peace," said one Saudi. (Maariv+VIDEO)


Palestinian Women – and Men – Get Their #MeToo Moment
Arab women are not just going public about their experiences of sexual harassment, but they’re going against their friends, colleagues and political allies. (Noa Shpigel and Jack Khoury, Haaretz+)
Spice of Zionism
Three entrepreneurs, immigrants from France, decided to do what all failed before them and grow saffron in commercial quantities. Saffron is considered the most expensive of spices due to its complex production, but the three did not shy away. They connected with a farmer in Moshav Bar-Giora farm and now, at the end of the first year, produced a few hundred grams of spice from a six dunam field. "In the years to come," they promise, "we will also reach seven kilos.” (Ilana Curiel, Yedioth Hebrew)
Renowned Israeli Expert Slashed U.S. Crime Rates. Why Isn't Israel Police Following His Lead?
As Israeli Arabs protest the deadly results of lax law enforcement, Hebrew University Prof. David Weisburd, whose doctrine has been hailed abroad, says he has the cure, (Josh Breiner, Haaretz - October 2019)
Keeping Israel safe: The most significant developments in defense this decade
The Middle East has experienced a tumultuous 10 years, posing challenges and opportunities alike for the only democracy in its midst. Israel Hayom counts down its topmost significant events of the decade in the realm of defense and security.  (Israel Hayom)
Reading Arabic Literature in Hebrew: New Translation of Egyptian Bestseller Opens the Door for Burgeoning Industry
The new Hebrew version of Naguib Mahfouz's 'The Coffehouse' arrives in bookstores at a time when more and more Arab authors are willing to give Israelis access to their oeuvres. (Eness Elias, Haaretz+)

Other Commentary/Analysis:
Israel’s Education Minister for Racism (Haaretz Editorial) A rotten stench of racism is wafting from the decision by the head of the Habayit Hayehudi party, Education Minister Rafi Peretz, to join forces for the coming election with the far-right Otzma Yehudit party, which spews hatred of Arabs in the spirit of the late Rabbi Meir Kahane. With this decision, Peretz has made himself unworthy of serving as education minister of all Israel’s children. We must not remain silent about granting such legitimacy to Jewish racism.
The ICC campaign of lies (Ben-Dror Yemini, Yedioth/Ynet) The Hague decision to investigate Israel for alleged war crimes is result of inherent biases within the system; but perhaps Chief Prosecutor Fatou Bensouda will, like Richard Goldstone before her, reject the probe she oversees.
The Right Has Eroded Israel's Protection Against an International Probe (Amos Harel, Haaretz+) A possible investigation at The Hague would look into aerial bombardment and civilian casualties, in a worrisome precedent for Israel as well as other Western armies. Netanyahu and his backers have shrugged off warnings of a diplomatic tsunami, but now it seems Trump’s support is not the be-all and end-all.
A Likely Hot Slogan of Israel's Upcoming Election: 'Death to The Hague' (Odeh Bisharat, Haaretz+) 80 years after its birth, in its old age, Yedioth Ahronoth is placing the Jewish state alongside the Iranians, the Syrians and the Turks! Yes, that’s exactly what it’s like, read Sunday’s reverberating headline of Yedioth regarding “the hypocrisy of The Hague,” as the newspaper described it…The situation of the (Yedioth’s) editor in chief is understandable. After all, his boss is busy with nighttime meetings spent bargaining with Prime Minister Benjamin Netanyahu to close the free daily Israel Hayom, thus to increase his profits. Maybe this motto, of profits above all, is what dictates the “gevalt” style on the front page of the newspaper, which, in the grip of this fervor, creates this type of foolish headline, which raises the pitch of the masses’ hollow patriotism. For the editors’ information, and not only those at Yedioth: Patriotism, like fat in the blood, becomes dangerous when it exceeds the permitted limits. Who knows, maybe the slogan “Death to The Hague” will yet turn out to be the hot slogan of the upcoming election campaign. If the party of the minister in charge of educating our children, both Arab and Jewish, embraces Kahanist politician Itamar Ben Gvir, anything is possible.
New ICC ruling reveals organization's true anti-Semitic intentions (Eldad Beck, Israel Hayom) If and when ICC judges rule it is within their jurisdiction to put Israelis on trial for "war crimes" allegedly committed in Judea and Samaria, east Jerusalem, and Gaza – the idea of an international court will have reached a point of historical, moral, and legal bankruptcy.
How Social Media Shapes Iraqis' Revolt (Zvi Bar'el, Haaretz+) From the modest part it had in the 2011 uprising, social media now sets the rules.
Abbas' election bluff ( Nadav Shragai, Israel Hayom) Palestinian Authority President Mahmoud Abbas hasn't run for office in 14 years. Now, under pressure from the EU, he is talking about holding an election, but this week, Hamas surprised him by agreeing to his conditions. Will the Palestinians have an opportunity to choose their leadership?
In Syria, Russia and Iran watch as new players step into the arena (Zvi Bar'el, Haaretz+)  While Saudi Arabia seeks a foothold in the oil-rich region, Assad says he has offered China investment opportunities in his country – where Russia, Iran and Turkey already operate.
Prepared for APN by Orly Halpern, independent freelance journalist based in Jerusalem.
comments powered by Disqus