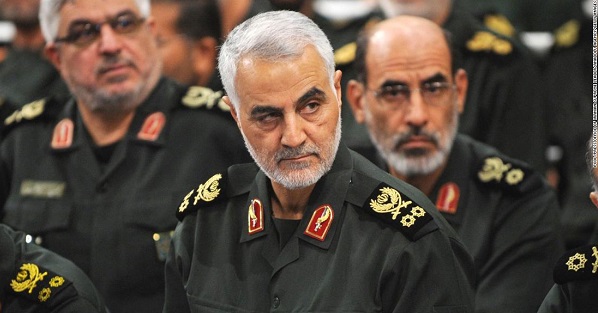 Quote of the day:
"The assassination of Qassem Soleimani is a rare event that alters reality and renders everything that happened before it irrelevant. What's required now is almost a complete reassessment of all previously held assumptions and conventions."
--'Israel Hayom' military analyst, Yoav Limor, in his analysis of the ramifications of the assassination of Iran's #2, Qassem Soleimani.*
You Must Be Kidding:
Ghislaine Maxwell, the British woman who has been accused of recruiting underage girls in the Jeffrey Epstein sex trafficking scandal, has reportedly found refuge in Israel.**

Top News:
Besides the sudden and massive floods in central Israel Saturday (Tel Aviv received 20% of its average yearly rainfall within a few hours), which killed a young couple stuck in a flooded elevator in south Tel-Aviv, the US assassination early Friday of top Iranian general Qassem Soleimani at the orders of US President Donald Trump was the big story of today’s Hebrew newspapers. And while ‘Israel Hayom’ presented the assassination as positive, calling it the “Elimination of the Century,” and its editor-in-chief, Boaz Bismuth, declaring that “Trump won at poker,” most of the analysts were not as joyful or as certain that this was a win for Israel. What they were certain of was that the region would change and no one knew how. See Commentary/Analysis below for very interesting insight and views on what this means for Israel and the region.

Iran and Hezbollah warned the US and Israel of a ‘decisive' response to the assassination and Iran said it had decided how it would react to the US strike. Israel braced for Iranian retaliation, heightening alertness along border regions Friday. Mount Hermon ski resort was shut down amid fears that Iran could order Hezbollah to strike at Israel.

Yedioth Hebrew wrote that “in Jerusalem, they are pleased with the assassination of Qassem Soleimani, the arch-terrorist who was responsible for Iran's consolidation on the northern border.” And Israeli Prime Minister Binyamin Netanyahu said that Israel stands with the US after Soleimani’s assassination. Netanyahu told his cabinet ministers not to say anything themselves on the subject. As the analysts wrote, the best thing Israel can do right now is to keep a low profile. Other Israeli politicians rejoiced on social media. Likud MK Gideon Sa'ar Tweeted: "God Bless America!" Another Likud lawmaker, MK Yoav Kisch, wrote on Twitter: "The demise of a villain." Yair Lapid of the Kahol-Lavan party congratulated US President Trump on Twitter for killing those responsible for "murderous terrorist acts from Damascus to Buenos Aires.” Palestinians mourned Soleimani. Leaders of Hamas and Islamic Jihad, both recipients of Iranian backing, joined mourners at a tent erected in Soleimani’s honor in Gaza City.

The assassination took place almost a day after Iraqi protesters stopped attacking the outside of the US embassy in Baghdad, following the US attack on a Shiite Iraq pro-Iran paramilitary group that killed dozens. Interestingly, hours before the Soleimani assassination, Israel Hayom had reported that “pro-Iran militiamen withdrew from US Embassy in Baghdad, but Iraq tensions linger.” Iran's supreme leader appointed Soleimani's deputy, Esmail Ghaani, as the new leader of Quds Force. But Israeli analysts doubted anyone could fit into Soleimani’s shoes.

Yedioth Hebrew’s Itamar Eichner wrote that the assessment is that Netanyahu was updated in advance of the attack because he had told political parties that the US was planning a significant move against Iran, and on Thursday, a day before the assassintion, Netanyahu said, without even being prompted: "We know our region…very very dramatic things are happening. We monitor this with vigilance and maintain close contact with our great friend the United States."

Features:
The head of the snake: Who was Qassem Soleimani? (Neta Bar, Israel Hayom) The son of a poor farmer, the leader of Iran’s elite Quds Force was known as the "living shahid" among Iraqi Shiites for his battle achievements and willingness to put himself in the line of fire.
Who Is Qassem Soleimani, the Head of Iran's Quds Force Killed in Iraq (Haaretz) Once an ordinary construction worker, Qassem Soleimani quickly climbed the Revolutionary Guards' ranks to become one of Iran's most prominent military figures.
Israelis support British woman convicted of false (rape) complaint: "We feel shame"
A group of dozens of women, including some men, will board a plane to Cyprus Tuesday to show support for the British young woman convicted of falsely complaining she was gang-raped by a group of 12 Israelis in a hotel room in Aya Napa, Cyprus. After she retracted her complaint, the young Britishwoman claimed that her confession, in which she declared she had falsely claimed she was raped, was taken from her by exerting illegal pressure on her. But the Cyprus court rejected this claim and ruled that she lied. After this court ruling, several dozen Israelis felt that they could not look away, and, in their view, the victim became a defendant and could now be severely punished. Israeli women and men will be present at her sentencing, which will be given on Tuesday, to express their support for her. It began with a Facebook post posted by Weiss last Wednesday in which she called on Israelis to attend the sentencing hearing in Cyprus. "The goal is also to say that this thing, that women victims become the accused, will no longer happen on our watch," says Weiss. "I have nothing to say on a legal level...but on the moral level, I'm not ready to see more guys dancing with kippahs on their heads after they've done that disgusting act. On any scale it's disgusting, and with this slime we don't dance anymore.""Our goal is to tell the British young woman that we believe in her. I want to say this as both an Israeli and a Jew," says Ruhama Weiss, Professor of Talmud at Hebrew Union College. "It was clear to me that I was flying to Cyprus and standing on Tuesday with a sign and telling the girl that I was with her. It was unbearable to me what they did to her." (Ilana Stutland, Maariv Magazine supplement, cover)
The world is against us? Or is it just indifferent?
For years, Israel has invested tremendous efforts and resources to present its side in the conflict with the Palestinians and to improve its image, but success has been limited. In recent years, a new trend has begun: to escape politics and showcase the attractions the country has to offer, focusing on young audiences. The result: a huge increase in tourism and numerous positive mentions on social media networks. “Vibe Israel" is one of the organizations that does just that. "We represent an innovative approach to improving Israel's image in the world," says the founder of the organization, Joanna Landau. "If until now, state institutions have been primarily concerned with explaining Israeli policy in the context of the conflict, we are seeking to promote and market Israel in the way a product or brand is marketed. The organization's flagship activity is to bring bloggers, YouTubers and Instagram personalities, all aged 40 and under - for an experiential visit to Israel. "Our tours include large groups of influencers, who are interested in specific professional areas - fashion, music, culinary, etc. Each group is tailored to the field where its members are active. To date, we have brought over 250 influencers to Israel and created over a billion positive mentions of Israel across social media networks. We have developed a brand book of Israel, which we use to train Israelis and Diaspora Jews to tell the story of Israel in the world, including guidelines on how to communicate it in the most effective ways for the Y generation and the Z generation.” She says the country is missing out on opportunities. "In our view, the government budget for hasbara (PR advocacy) is divided wrong,” she says, "95% of it is directed to crisis management and only 5% to marketing. If, in the past, the Foreign Ministry led the issue, today its budgets are very limited. It is the Ministry of Tourism that is currently marketing the state, mainly to increase the volume of tourists.” Indeed, in recent years there has been a real revolution in the Ministry of Tourism on this issue, and it allocates a huge budget for branding. "There is no longer a body besides us that allocates half a billion shekels of its budget for marketing and branding operations," says Amir Halevi, director general of the Ministry of Tourism. "We operate in 15 countries and have rented 21 advertising agencies and 12 PR offices around the world. We have become the marketing hub of the country."
What caused the conceptual change in the office? "Over the years, Israel has been seen as a region that incorporates strong religious symbolism alongside ongoing conflict, which also connects to the religious side. When Yariv Levin became Tourism Minister, we decided to go toward new avenues. From research we have found we should develop sub-brands such as Tel Aviv and Jerusalem, different from the brand General Israel. We marketed Tel Aviv as a non-stop city and as an economic and cultural center, and Jerusalem as a culinary center in the center of the with its focus the gentrifying Mahane Yehuda market. The branding and marketing activities we do in a diverse and smart way using YouTube, Instagram, all media, billboards, articles on global tourist sites and even bringing in bloggers and opinion leaders from abroad to meet the other and new faces of Israel.” (Yuval Gamliel, Yedioth Hebrew's '24 Hours' supplement)