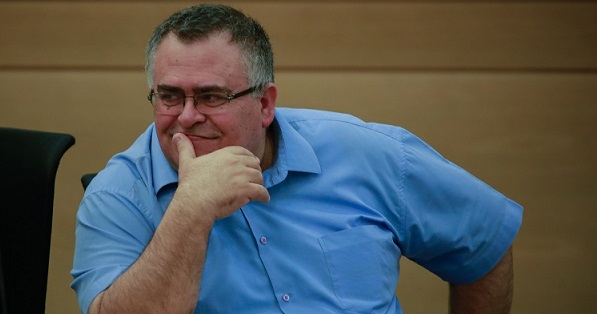 Quote of the day:
"As strange as it sounds to an Israeli ear, the ayatollahs in Tehran are currently more grounded and more calculating than the president of the United States."
--Yedioth's top political commentator, Nahum Barnea, examines how a rogue state responds to a rogue president.*
You Must Be Kidding:
Israeli Prime Minister Binyamin Netanyahu appointed a man under suspicion of bribery as minister of agriculture.**

Top News Summary:
The aftermath of the assassination of Iranian Al-Qods Brigades commander, Qassem Soleimani, no longer was the main headline of the Hebrew newspapers. Most of the papers focused on the what went wrong with emergency services that didn’t answer calls that could have saved a young couple from drowning to death inside a flooded elevator. Also making news was the tension between the Knesset Speaker, Likud MK Yuli Edelstein, and the Knesset legal advisor over the formation of a Knesset committee to decide whether to give Israeli Prime Minister Binyamin Netanyahu immunity in the three corruption cases he faces. Interestingly, Attorney General Avichai Mendelblit said that he found it “hard to believe” that a Knesset committee would find grounds for accepting Netanyahu’s claim that he was framed by those who indicted him and therefore he should receive immunity.

**The other top story was that Netanyahu named David Biton, a Likud MK and loyalist under suspicion of receiving bribes, as agriculture minister and he named as diaspora affairs minister Tzipi Hotovely, who said accusingly that Jews in the diaspora live ‘convenient lives.’

As Qassem Soleimani's body arrived in Iran for burial, Iran declared it was ending its commitment to the nuclear deal limit for enriching uranium, the Iraqi parliament voted to expel the US military from Iraq, Hezbollah chief Sheikh Hassan Nasrallah said US forces would be expelled from the region, if necessary in coffins, and three rockets fell in Baghdad, two of them near the US embassy. Meanwhile, US President Donald Trump threatened to hit Iran at 52 sites if Iran fulfilled its promise to retaliate at 35 US sites. He also said he would put sanctions on Iraq “like they've never seen before” if they force US troops to leave.

Features:
Beauty Is Making a Come Back in Israeli Architecture - but Not in Jerusalem
The aesthetic dividends need to be shared equally, and yet, even the historical city is managed like a remote provincial town. (Ziva Sternhell, Haaretz+)
Ex-Shin Bet man sculpts himself into an artist
81-year-old Reuven Hasak was No. 2 in the security service during the infamous Bus 300 affair, in which two captive Palestinian terrorists were killed by troops; today the brass masks he creates reflect his impressions of Israel’s ongoing political and diplomatic stagnation. (The Media Line, Ynet)

Qassem Soleimani Assassination Commentary/Analysis:
Trump's impulsive Soleimani strike harms U.S. interests, and benefits Iran (Daniel B. Shapiro, Haaretz+) The abruptness of Trump's decision to target Qassem Soleimani - who deserved his fate - is a burden for Israel and another blow to U.S. strategy in Iraq and Syria, if not the wider Middle East.
*When a rogue president takes on a rogue state (Nahum Barnea, Yedioth/Ynet) The Ayatollahs in Tehran are currently more grounded than Trump and now they have to think of revenge for Soleimani that is horrifying enough to deter him from further action, but not so horrifying as to drag him into war.
It was time for US to break foreign-policy 'rules' (Jonathan S. Tobin, Israel Hayom) What follows next is unclear, but by killing Iranian arch-terrorist Qassem Soleimani, Trump has broken the wheel of appeasement that enabled Tehran’s ongoing aggression.
Soleimani’s Successor Must Also Contend With the Enemy Within (Zvi Bar'el, Haaretz+) The question of whether the new Quds force chief will be as strong an internal political player may be preoccupying Tehran more than how to avenge his predecessor's death.
Soleimani’s gone: What’s next for Trump? (Fiamma Nirenstein, Israel Hayom) President Trump is sincere when he says he doesn’t want war, as is Secretary of State Mike Pompeo when he reiterates that sparking a war wasn’t the aim of killing former Quds Force commander Qassem Soleimani.
As Qassem Soleimani’s Megalomania Grew, He Became Less Grounded in Reality (Yossi Melman, Haaretz+) The late commander of the Iranian Revolutionary Guards’ Quds force believed he was capable of creating a Shi’ite empire in the Middle East.
Trump surprised everyone, especially Soleimani (Alex Fishman, Yedioth/Ynet) After decades of wariness and passivity over confronting Iran, the U.S. has suddenly revolutionized its Mideast policy, and the general consensus in Israel is that it will not pay the price for this about-face.
Trump Just Turned the United States Into a Mideast Country (Bradley Burston, Haaretz+) By killing his kindred spirit Soleimani, Trump’s ample figure assumes a closer and closer resemblance to the profile of the Middle Eastern despot.
Criticism of Trump over Syria has been a hoax (Oded Tirah, Maariv) Despite leaving Syria, the United States is present in the Middle East. Following the US military withdrawal from Syria, the US assassinated Al-Baghdadi and Soleimani, and it attacked important targets of Iranian proxies in Iraq.
Following Soleimani Assassination, Nasrallah Aims to Expel U.S. From the Mideast (Amos Harel, Haaretz+) Tehran and its proxies will try to retaliate in a way that would keep the U.S. and Iran below the threshold of war. Israel, surprisingly, is out of the game.

Elections 2019/Netanyahu Indictment Commentary/Analysis:
Israel’s Left Badly Needs a Joint Ticket for the Next Election (Haaretz Editorial) Two months before the election, the two parties of the Zionist left seem to be busy splintering rather than joining forces. While Meretz is trying to push Stav Shaffir to the bottom of the slate and break up the Democratic Union joint ticket, Labor Party chief Amir Peretz continues to insist on running again on the Labor-Gesher joint ticket with Orli Levi-Abekasis.
The legal system undermines and degrades the ruling system, and in fact incites against it (Meir Uziel, Maariv) Throughout the last decade you have heard that the government and the politicians are undermining and weakening the legal system, but today it is far more correct to say the opposite is true. There is a tendency to describe the situation in Israel as a divide between two camps - two social classes and two types of voters' minds. It is as if the working class whose brain is underdeveloped is voting for the right-wing parties, while the people who are highly paid and have professions that require academic education are left-wing voters. The camp of the workers does not understand at all why he is voting for his party and for his Bibi because he is acting on feelings that he does not control, and if he has opinions, then these perspectives are askew. On the other side, there are all the smart, honest, decent, people with high incomes and living standards, who in the morning go to the museum and the rest of the day defend democracy, and rely mainly on the police and the judiciary, which is their army in the war against those who vote strangely and disrupt the world. All this is inaccurate. In the camp that supports Likud and the right-wing, the same camp that has lost faith in the justice system, there are many educated people. More importantly, there are many jurists among Netanyahu's supporters battle against the justice system. Senior jurors repeatedly speak eloquently against the distortion, unilateralism, and the dangerous pretense of the justice system to lead. One of the most prominent and consistent of these writers is Dr. Haim Misgav, whose column appears in this newspaper, and from deep knowledge of the law and after a long life within and with the legal system, he criticizes the compulsive leadership position adopted by the justice system.
The very discussion about whether Netanyahu is legally able to form a government is outrageous and wrong (Dr. Haim Misgav, Maariv) The fact that there was a hearing on the question of the competence of the prime minister is intended to convey a clear message that the High Court will not remove its hand from the throat of the elected system.
When Israel's High Court of Justice Is Afraid of the 'Street' (Tzvia Greenfield, Haaretz+) The High Court is avoiding ruling on something that is self-evident: It is inconceivable that Netanyahu, facing three serious indictments, should be able to form a government.
No Answer: The round of ministerial appointments is another cynical line that we easily cross (Matan Wasserman, Maariv) Why did the media besmirch the appointment of the new Minister of Agriculture (David Biton, who is suspected of bribery)? Perhaps due to the expectation that within the turbulence of the criminal cases against Netanyahu, a leadership will arrive that will define a line of values. And what did we get instead? Another (criminal) defendant.

Other Commentary/Analysis:
I Survived a Palestinian Terror Attack. For Me, Demolishing Terrorists' Homes Is No Comfort (Linda Dayan, Haaretz+) Two months after the attack, I got a message: 'The IDF is destroying the terrorists' houses.' I felt nothing.
The multiple faces of anti-Semitism (Ben Cohen, Israel Hayom) For all their insistence that anti-Semitism is one thing and anti-Zionism something else entirely, however, on the streets of European and American cities, the two work hand-in-glove.
From the Arab Spring to Trump's Twitter Feed, How Social Media Changed Middle East Politics (Alexander Griffing, Haaretz+) From the Arab Spring to Trump’s Twitter feed: The decade social media went from a tool of freedom to one of oppression.
How ISIS Made Al-Qaida and the Taliban Look Like Moderates and Where We Go From Here (Shaina Oppenheimer, Haaretz+) The head rush from the Arab Spring protests turned to panic as ISIS took radical Islam where no terror group had gone before: Establishing a caliphate which, at its height, spanned the size of Britain.
ICC is undercutting its own legitimacy (Nitsana Darshan-Leitner, Israel Hayom) The recent actions by The Hauge prove that while it was set up to punish those who butcher whole nations, it has become little more than a political battering ram.
IDF Chief Saves Face by Green-lighting Women Tank Soldiers' Scheme (Amos Harel, Haaretz+) His decision, made after the High Court put a gun on the table, shows Aviv Kochavi's the boss regarding women in combat – not rabbis.