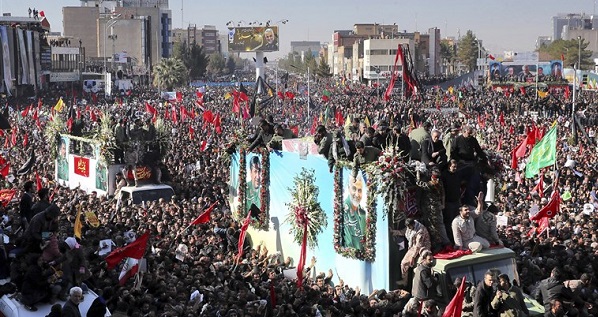 Number of the day:
55.
—Percentage of Israelis who think that democracy in Israel is in danger.*
Front Page:
Haaretz
Yedioth Ahronoth
Maariv This Week (Hebrew links only)
Israel Hayom

Aftermath of Qassem Soleimani Assassination:
The US prepared for an Iranian attack after Iran simultaneously threatened and made offers (UPDATE: and later, after midnight, Iran shot missiles at US forces in Iraq), Israel’s Chief Sephardi Rabbi got blasted for calling immigrants from the former Soviet Union “goyim” (non-Jews) and “religion-haters” and the weather threatened to bash the country - making top stories in today’s Hebrew newspapers.

The US said that it was “completely coincidental” the the U.S. Air Force launched
52 fighter jets in a Utah training exercise, the same number as the number of Iranian sites that Trump said he would target if Iran were to attack any Americans or any US assets, following the US assassination of Qassem Soleimani, commander of Iran’s al-Qods Force and a national hero. Nevertheless, in a rare rebuke, the Pentagon said US President Donald Trump could not target Iranian cultural sites. The US also warned that ships in Middle East waters could possibly be attacked by Iran. Even before the Iranian attack on US forces in Iraq late Tuesday night, Brett McGurk, Trump’s former special envoy against ISIS, said that the U.S. now needs to assume it is in a state of war with Iran following the killing of Gen. Qassem Soleimani.

Earlier, on Tuesday morning, Iran surprised when it announced that it was “ready to come back to full compliance” regarding uranium enrichment as per the nuclear deal, despite announcing on Sunday that it was abandoning the agreement and would enrich as much uranium as it wanted.

In the midst of the tense situation, Russian President Vladimir Putin made a surprise visit to Damascus to meet with Syrian President Bashar al-Assad. He was not the only one. Trump’s new Mideast envoy, Avi Berkowitz, arrived in the country and met with Netanyahu reportedly to discuss the Trump administration's so-called "deal of the century" for a future peace agreement with the Palestinians. He also met with Kahol-Lavan leader Benny Gantz. [NOTE: Berkowitz, 31, is an ultra-Orthodox Jew and a lawyer who worked with Trump's son-in-law, Jared Kushner, after they became friends during college, later worked on Trump's presidential campaign and then as an advisor to Kushner and Trump in the White House. - OH]

Other Commentary/Analysis:
Police in Service to the Right Wing (Haaretz Editorial) On Monday, undercover police officers waited for left-wing activist Jonathan Pollak at his workplace, Haaretz, and arrested him. His arrest resulted from a private criminal complaint submitted by the right-wing organization Ad Kan. Even though Pollak’s arrest stemmed from his refusal to attend court hearings, this arrest must be seen as a clear case of political persecution by the right-wing organization Ad Kan, in which the court and the police volunteered to serve as the group’s operational arm.
A possible bombshell for Arab politics (Jalal Bana, Israel Hayom) If former Sakhnin Mayor Mazen Ghanayem leaves the Balad party and runs with the Democratic Union, will Arab voters move away from the Joint Arab List?