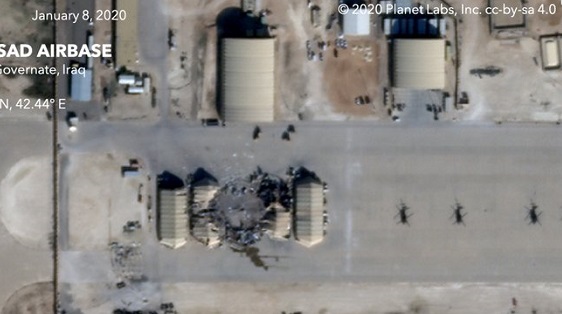 Quote of the day:
"For years the Washington-Jerusalem axis has had a tiring debate about the essence of the "credible military threat" toward Iran, which will deter it from breaking into nukes. Well, the answer was given yesterday: a credible military threat is the one you feel when it's in your face. The Iranians felt it and decided that, with all due respect to Shahid Soleimani, the survival of the regime is paramount."
--Yedioth's Middle East analyst, Shimrit Meir, examines the Iranian retaliation to the US assassination of Iranian commander Qassem Soleimani.*
Front Page:
Haaretz
Yedioth Ahronoth
Maariv This Week (Hebrew links only)


Top News Summary:
Israel’s torrential floods, lethal flu (22 have died from it) and the Iranian retaliation missiles that fell on US bases in Iraq were top stories in today’s Hebrew newspapers along with the development of a new Israeli laser that can intercept rockets and anti-tank missiles.

Yedioth called the Iranian missiles that landed on US military bases in Iraq, “half a revenge,” Maariv quoted the Supreme Leader Ayatollah Ali Khamenei, who said, “The Americans got a slap in the face,” and the pro-Trump, pro-Netanyahu paper, ‘Israel Hayom,’ quoted Trump, but the commentators and analysts agreed that - for now - the situation has calmed. US President Donald Trump spoke with Israeli Prime Minister Binyamin Netanyahu by phone Wednesday. Trump had said earlier that there were no US casualties and that Iran ‘appears to be standing down. A US general said that Iran intended to kill U.S. personnel in the missile attack. But satellite images showed the missile hits were precise and the assessment of some was that Iran deliberately missed hitting the US forces. so as to prevent the crisis from escalating. France advised its citizens in Israel to be cautious in Haifa, a northern city that was hit by Hezbollah rockets in the Second Lebanon War. The Hebrew newspapers also reported on the dozens of people killed in a stampede in the procession for the US-assassinated general, Qassem Soleimani.

Qassem Soleimani Assassination Aftermath Commentary/Analysis:
Iran Retaliated for Soleimani’s Killing. It Doesn’t Mean It Ends There (Amos Harel, Haaretz+) Missile attack on U.S. bases in Iraq caused only minor damage, but concluding Tehran can no longer cause actual harm in the region with covert actions is premature.
*Symbolic revenge (Shimrit Meir, Yedioth Hebrew) Despite the threats, Khamenei did not take the risk and failed to put Trump's resolve to the test. It is hard to overstate the importance of the psychological barrier that broke yesterday morning, with the Iranian revenge for the assassination of Qassem Soleimani...The Iranian action was somewhat reminiscent of how the IDF bombs Hamas targets when it does not want to escalate the situation, including leaving an intelligence signature that allowed Americans to avoid casualties and Iraqi advance notification of the timing, to be sure. Only the "straw roof" was missing. The Iranians immediately signaled that they had completed the immediate phase of revenge and that if the US did not respond they could all return to routine. Trump accepted the messages, celebrated a victory in a presidential message, and in effect announced that the US response would come in the form of further sanctions, namely - there would be no military response. All parties, including the Arabs, are interested in calming the situation, but there are two other open ends: the revenge by the Shiite militias for the assassination of one of their commanders along with Soleimani, and the long-term revenge that Iran and Hezbollah established as a campaign for American expulsion from the Middle East, and Iraq first. For years the Washington-Jerusalem axis has had a tiring debate about the essence of the "credible military threat" toward Iran, which will deter it from breaking into nukes. Well, the answer was given yesterday: a credible military threat is the one you feel when it's in your face. The Iranians felt it and decided that, with all due respect to Shahid Soleimani, the survival of the regime is paramount.
A bad day for Middle East terrorists (James Sinkinson, Israel Hayom) Iran is on the ropes financially, politically and militarily. While the country is well-armed, there are limits to how much more credibility and assets Khamenei is willing to throw into battle against the US and Israel – two equally determined and better-armed rivals.
It's Israel's Interest to Stop American Belligerence (Ofer Cassif, Haaretz+)  Targeted assassinations, as they are euphemistically called, don’t solve a thing. They perform good service for the public relations of the assassin, in this case Trump in an election year, but in terms of long-term influence they do not change anything substantial. Already on the day of the assassination a replacement was appointed, Soleimani’s deputy, and in the long run Iranian activity will continue. Perhaps with even greater intensity. In quite a few instances it has even turned out that the assassination of one leader led to the rise of a another who was even more militant. For example, Hassan Nasrallah, who replaced Abbas Mousawi as the leader of Hezbollah. As in the story of the Hydra in Greek mythology, here too when one head was removed, usually two heads grow, stronger and more aggressive.
To restrain or respond: A big dilemma is at the door of Trump (Tal Lev-Ram, Maariv) An event in which another country directly and explicitly attacks US targets is an unusual event on any scale. Therefore this event must also be considered from an unusual perspective.
2020 likely to be another decade of defiance, dissent (James Dorsey, Israel Hayom) Like the previous decade, the new year – and perhaps the new decade – is likely to be marked by popular protest, particularly in the Middle East and North Africa.
Iran Still Wants Revenge for Soleimani's Killing. But Does It Have the Cash for It? (Zvi Bar'el, Haaretz+) Tehran has the weapons, the pride, and the righteous indignation, but nobody really knows if it can afford an all-out fight with the U.S.

Other Commentary/Analysis:
Brave, Inspiring Protesters Are True Israeli Patriots (Gideon Levy, Haaretz+) In the courtroom in Paralimni, Cyprus, and in the magistrate’s court in Jerusalem, brave and inspiring expressions of protest were made on Monday – by those who do not accept the yoke of enforced patriotism and who are willing to pay the price, too. The Israeli patriots are unwilling to accept acts of resistance against the state, its institutions or even against Israeli citizens outside of Israel. Nationalism will cancel out anything for them, including crimes. But between the dozens of Israelis, men and women, who came to Cyprus on Monday to demonstrate in solidarity with the young British woman who was convicted of making up a gang rape by a group of young Israelis – and Jonathan Pollak, who was arrested for failing to appear in court on a criminal complaint filed against him by the right-wing organization Ad Kan, accusing him of attacking Israeli soldiers – runs a straight line, the line of courage and humanity.
In Israeli Left-wing Activist's Arrest, Court Dances to the Tune of Settler Incitement (Michael Sfard, Haaretz+) Disclosure No. 2: I scorn Ad Kan and am busy rebuffing its attacks on my clients, with notable success. The entire existence of this organization – famed for planting spies in groups like Ta’ayush and Breaking the Silence and for entangling journalists into sensationalist headlines, that turn out to be groundless, about supposed grave security offenses by anti-occupation activists – depends on its right-wing political patrons being in positions of power. In other words, as soon as the settler-right regime ends, the organization will vanish into oblivion: It can’t survive without access to the government power centers that give it a platform and influence. Ad Kan is one of the mutant civil society organizations that have taken root here recently, which act on behalf of the government and largely in coordination with it, to make the strong stronger and to weaken and silence the weak and the minority. This is the organization the honorable judge gifted Pollak’s arrest.
Cyprus Rape Case Is a Wake-up Call for Israeli Parents, Educators (Orit Kamir, Haaretz+) Now we can breathe a sigh of relief: The Cyprus court that convicted a young woman of inventing a rape and filing a false complaint against a group of Israel youths has sentenced her to probation, not prison time. So she can immediately return home to Britain and begin the difficult process of rehabilitation that awaits her. Since the rape complaint was not examined in a legal proceeding, we will probably never know just what happened between the girl and the group of boys she accused before subsequently withdrawing the complaint. We may never know if the girl managed to say “no” or if the boys heard her plea. We cannot know if the incident meets the Cypriot – or Israeli – legal definition of rape. But we don’t need any legal ruling to tell us that these boys who have families, who are products of the Israeli school system, were present in a room where some of them had sex with this one girl while others filmed it.
Justice in Rape Case, Cyprus Style (Noa Shpigel, Haaretz+) Lead Cypriot police investigator in case that made big headlines in Israel and Britain tells blatant lie on stand; what sort of justice can be expected for woman who accused 12 young Israelis of raping her?
Why Erdogan Put a Huge Bounty on Exiled Palestinian Leader Mohammed Dahlan (Yossi Melman, Haaretz+) The former Fatah leader in Gaza, who fled to the UAE following the Hamas takeover of the Strip, has emerged as a shadowy wheeler-dealer and has even been mentioned as a possible successor to Palestinian President Abbas.
Remembering Emily Landau, a Rare Female Voice in Israel's Male-dominated Security Sphere (Allison Kaplan Sommer and Esther Solomon, Haaretz+) Security expert and frequent Haaretz contributor – who died Monday at 59 – was a high-profile critic of the Obama nuclear deal, but did not see war between U.S. and Iran as inevitable.
Turning BDS into 'Buy directly from Samaria' (Gary Schiff, Israel Hayom) Israel might be underestimating its friends’ willingness to help; proudly labeling and publishing Israeli products and developments may be the best long-term strategy against BDS.


Interviews:
'Hate Has Been Unleashed' New York's AG Lays Out Her Plan to Solve the State's anti-Semitism Crisis
New York Attorney General Letitia James tells Haaretz how she plans to enact a combination of tougher legal action, educational work and a crack down on online hate speech. (Interviewed by Amir Tibon in Haaretz+)