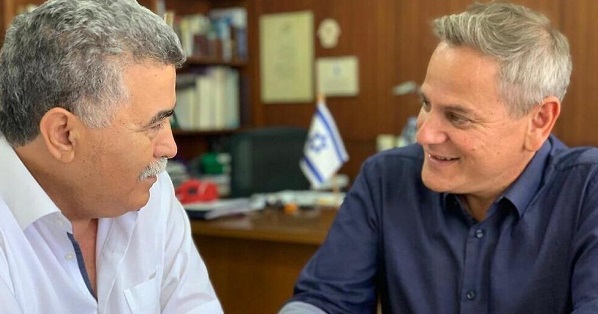 Elections 2020/Netanyahu Indictment News:
Israel’s two left-wing Zionist parties unite and a Knesset committee approves forming a separate committee to vote on Israeli Prime Minister Binyamin Netanyahu’s immunity request making the top stories in today’s Hebrew newspapers alongside the arrest of an ultra-Orthodox cult leader who abused women and children and the attempted cover up by the Israel Air Force of its negligence in preparing for the storm, which ended up damaging fighter jets at the cost of hundreds of millions of shekels.

The Likud MKs put up a fight in the Knesset Committee, doing their best to delay the vote, if not cancel it, so that Netanyahu’s immunity request won’t be discussed - as he is not expected to get it when it is put up for a vote. But the Knesset plenum must vote in favor of the new committee.

The Labor party, which once established the state and governed it for many years, entered into a joint political list with the Meretz party in order that both of them make it across the minimum threshold to enter the Knesset. All parties have till 10PM Wednesday to submit the members of their lists. In an apparent jab at Kahol-Lavan party, Meretz party leader Nizan Horowitz said, “Those who want to vote for the right-wing can vote for Likud or Kahol Lavan. Those who want to want left have one choice.”


Elections 2020/Netanyahu Indictment Commentary/Analysis:
Labor-Meretz Merger: Once a Powerhouse, Israel's Founding Party Struggles to Survive (Anshel Pfeffer, Haaretz+) Israel's Labor Party once dominated the Knesset, and its aim was to keep hold of and share its power. Now it's all about survival.
Who will fight for peace in Israel? (Sever Plocker, Yedioth/Ynet) Left-wing parties Labor and Meretz have aligned and will pursue a socialist economic agenda that will not serve to attract any voters away from Likud or Blue & White.
The Israeli Right is on the precipice of defeat (Amnon Lord, Israel Hayom) The Left, with support from the media and judiciary, is plowing ahead to victory while the Right is mired in division, indolence and self-pity.
Netanyahu's budget deficit problem (Roi Bergman, Yedioth/Ynet) Forget the opinions of professional bodies such as Finance Ministry and Bank of Israel or every money expert in Israel, the prime minister would much rather bury his head in the sand when it comes to the warnings of a looming economic crisis, so that he claim that all is well ahead of the upcoming elections.
Enough with the Trump-Netanyahu analogies (Jonathan S. Tobin, Israel Hayom) Despite the superficial analogies between the two embattled leaders and allies, America is the nation grappling with a real political crisis, not Israel.
Don't want Arabs (Afif Abu Mukh, Yedioth Hebrew) After fortunately, Benny Gantz smiled quite a few times in the past during his military and political career, and he smiled again and brought a connection between the left-wing parties that Kahol-Lavan prayed and hoped for: a connection of the two parties left of his party, the Labor=Bridge party and the Joint List, thus ensuring that none of the center-left-Arab bloc lists - or by its other name, the "just not Bibi" bloc - would get stuck on the wrong side of the threshold.
The Israeli Left's Labor-Meretz Linkup: An Alliance Forged by Fear, Not Love (Ravit Hecht, Haaretz+) The difficulty in forging a slate between people who have no fundamental differences of opinion show that culture wars and ethnic rifts still drive Israeli society.
Blue & White's campaign should focus on its leaders' military past (Dr. Baruch Leshem, Yedioth/Ynet) The centrist party insists on focusing on Netanyahu's legal woes, which don't seem to deter his voters; it's time for the party's leaders to reevaluate their election campaign and pull their old uniforms out of the attic.

Other Commentary/Analysis:
Lucky No One Blamed ‘Flood Terror’ (Odeh Bisharat, Haaretz+) Channel 20’s diplomatic analyst, Shimon Riklin, marveled at the beauty of nature in a tweet last week, in which he described, “The water rushing through the streams, the level of the Kinneret breaking records, and Israel being flooded with water as never before, to the degree that it’s giving it to the neighbors.” Riklin is known to be one of Netanyahu’s most fervent supporters, and such a tweet, coming from such a relentless promoter, signifies the disconnect between the leader and his circles, and the rest of the public. Instead of the leader going out to comfort his people, his minions implore the people to rejoice, and that the masses should speak of the beauty that floods the land of the forefathers. Riklin’s message was also that when faced with a natural disaster, one shouldn’t demonstrate panic or pain, or criticize the authorities’ failures.
Is the Mideast heading for an energy war? (Prof. Eyal Zisser, Israel Hayom) Once, most of the wars in the Middle East were about water, one way or another. Now natural gas – which could make us all rich – is staying in the seabed because of ego, politics, and greed.
Israeli Government Faces Crucial Decision on Reining in Natural Gas Cartel (Avi Bar-Eli, Haaretz+) At stake: the cost of living for ordinary Israelis, but also the ability of regulators to exercise control over the country’s natural gas industry.
Needed in Israel: CTRL-ALT-DELETE (B. Michael, Haaretz+) A week ago I was sitting and staring at the screen. Two people had drowned. They sunk to the depths in an elevator. Now, that’s backwards. You descend to the depths in a submarine, not in an elevator. And Nahariya had turned into a river (nahar in Hebrew), justifying its name. There was one death and people hurt. The political scene, however, was preoccupied with whether giving David Bitan the Agriculture Ministry was the right thing to do.
Enough of the Cover-up Culture (Haaretz Editorial) The damage caused by the flood last week at the Hatzor Air Force base, which did damage to eight F-16 fighter jets estimated at millions of shekels, is worrisome. Because of negligence, huge sums of public funds went down the drain and the army’s readiness was undermined, during a period more sensitive than usual from a security perspective given the tensions in the Persian Gulf. It’s especially unfortunate because this happened to the Israel Air Force, which is generally considered a “greenhouse” for quality management compared to what happens in other parts of the defense establishment. Nevertheless, the IDF did not report what happened to the pubic on its own initiative; the military censor delayed publication of the mainstream press reports until Sunday.
Taking out Soleimeini should never have been a question (Thane Rosenbaum, Israel Hayom) What more did the head of Iran's Quds Force have to do to merit an early demise? He surely knew that in his line of work, death by natural causes is a rare occurrence.
Feminism and the Army Don’t Mix, Even in Israel (Yagil Levy, Haaretz+) There is no feminist achievement here. And in welcoming the step, the Women’s Network was acknowledging the centrality of the army in determining the status of women in civil society. Not only is this centrality becoming less valid, but if this assessment is correct, that’s the target against which feminists should fight – instead of their reinforcing it. The demand for gender equality in the army must be based on the principle of the right to fill any position in the civil service – especially under a regime of compulsory service – without empowering the military.
The Russian angle: Soleimani's assassination has positive aspects for Moscow (Mickey Aaronson, Maariv) Despite the Russian public’s condemnation of the senior Iranian’s killing, the Kremlin has benefited from some of the consequences of the move: rising oil prices and delaying Tehran's buildup in Syria.
Where do we go from here with Iran? (Eric R. Mandel, Israel Hayom) We need to look at the new possibilities and perils in the era that follows the US killing of the commander of Iran's Revolutionary Guards Corps, Maj. Gen. Qassem Soleimani.

Interviews:
Israel's 'Censor in Chief': The Activist Who Manages to Silence the Left
Shai Glick has used his keyboard and his connections to block performances and exhibitions in Israel. ‘When I silence Dareen Tatour, I’m fighting for human rights,’ he tells Haaretz. (Interviewed by Nirit Anderman in Haaretz+)