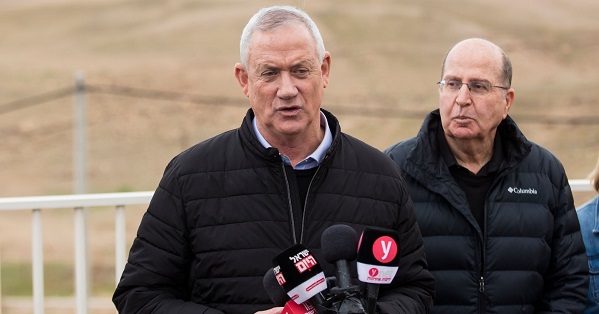 Quote of the Day #1:
“While the world is busy worrying about Trump's declarations and the administration's reactions, the situation on the ground is deteriorating, and the aggression and antagonism of the settlers are only getting stronger."
—Ghassan Douglass, who follows settler activities in the northern West Bank, said after settlers attack and injured a Palestinian father and son.*

Quote of the Day #2:
"Don't say I'm delusional. According to what's going on in the State of Israel, it can still happen, anything can happen. If Miri Regev is the Minister of Culture, Naftali Bennett is Minister of Defense, Amir Ohana is Minister of Justice and David Amsalem is Minister of Communications, then (Kahanist Itamar) Ben-Gvir and Trimbobler (wife of killer of Yitzhak Rabin) can integrate wonderfully around the government table."
--Maariv commentator and radio host, Natan Zahavi, wrote that he would not be surprised if two of the most extreme right-wing people running in the upcoming Israeli elections were to become part of the government.*


Elections 2020 / Netanyahu Indictment News:
Kahol-Lavan Chairman Benny Gantz surprised everyone by demanding and receiving a private meeting with US President Donald Trump to discuss Trump’s peace plan - separate from Israeli Prime Minister Binyamin Netanyahu’s meeting, and while politicians and commentators agreed that Trump and Netanyahu were using Gantz’s visit to deflect attention from their own impeachment/immunity problems, the commentators argued about whether the ‘deal of the century’ - and specifically annexation of the Jordan Beqaa Valley - was “a historical opportunity that must not be passed up” or a catalyst for more problems. Meanwhile, it turns out Naama Issachar, the Israeli young woman imprisoned in Russia, never made a pardon request, which she will do now and will likely be released in a few weeks, while Israel fears that the Chinese Coronavirus will reach Israel - making top stories in today’s Hebrew newspapers.

Gantz and Netanyahu flew to Washington, D.C. today to meet Trump ahead of his release of his Mideast peace plan, which falls - possibly not so coincidentally - on the same day that the Knesset convenes to begin the debates over Netanyahu’s immunity request - something Netanyahu had hoped would be postponed till after elections. Yisrael Beiteinu chairman Avigdor Lieberman said Netanyahu was not traveling to the US, but rather “fleeing” the immunity discussions. And his party has submitted a bill proposal to annex the Jordan Valley, which could be approved with or without Gantz's Kahol-Lavan party.Yedioth’s diplomatic affairs correspondent wrote that Netanyahu already knew the details of the Trump plan in advance. The plan includes a Palestinian state with no military, no control of border or alliances, Israeli sovereignty over all but 15 settlements and over all of Jerusalem, all this is a complete reversal from the 2000 Clinton plan in 2000, Yedioth’s Itamar Eichner wrote. Trump said he knows the plan will not be received positively by the Palestinians, but insists that “it's actually very positive for them.” The Americans and Israelis are even working together to prevent expected fallout at the UN, Israel Hayom reported. US Ambassador to the UN Kelly Craft is postponing her visit this week to Israel and will remain with Israeli Ambassador to the UN, Danny Danon, in New York to work together to coordinate their responses to the various challenges expected to arise after the peace plan is published, the paper wrote. The chairman of Labor-Gesher-Meretz list, Amir Peretz, said,  "There is nothing serious about a political proposal a few weeks before the elections.” (Maariv) The Palestinian President Mahmoud Abbas warned Israel and the US against 'crossing red lines' in the peace plan. A senior Palestinian source said the presentation of the peace plan now is meant to help Netanyahu with his elections, "we know when personal interests are at play," said the senior official.” Jordan’s Foreign Minister called annexation of parts of the West Bank “the elimination of the two-state solution.” (Maariv) But right-wing leaders insisted that any land given (back) to the Palestinians is unacceptable. And they are taking action. Samaria (settler) council chairman Yossi Dagan has also flown to the US to meet with Republican officials and evangelical leaders to express objection to the establishment of a Palestinian state. (Maariv)

In an interview on 103FM radio/Maariv with some right-wing journalists, Maj. Gen. (res.) Danny Yatom, the former head of the Mossad, said he opposes the annexation of the Jordan Beqaa Valley, Area C or any other area. "Every unilateral step only worsens the situation.” (See Interviews below.)


Other Top News Summary:
Worth noting, Maariv reported that the first indictments for negligent death on a construction site were not against the major building contractors and construction companies, which do not provide the safety measures at building sites, as a result of which so many laborers - most of them Palestinians - die - but rather against two Palestinian workers, an electrician and a crane signaller, who together operated the crane to move heavy electric equipment without authorization because the man authorized to tie the equipment up was absent - and accidentally caused the death of a Chinese worker. The reporter did not ask why the newly formed investigation unit chose to go after two employees first and not after the big companies, who are repeat offenders and who continue to risk human lives. And when the overwhelming majority of victims at construction sites are Palestinian and the investigation unit chooses to indict two Palestinian individuals, employees, and not the big Israeli companies responsible for almost all the deaths, then questions need to be asked.
Quick Hits:

Features:
Here's What Happens if Israel Annexes the West Bank and Lets Palestinians Vote
A binational state with voting rights for all its Arab and Jewish citizens would radically change the makeup of Israel’s parliament. Here's how. (Judy Maltz, Haaretz+)
Looking evil in the eyes
They walk down the corridors of the prison, behind them dozens of male prison guards, in the prison cells, Palestinian with ‘blood on their hands.’ Capt. Orly Cohen and Officer Hagit Salah made history in the Israel Prison Service when they were appointed to be the first guard commanders in the security prisons. Special: Our correspondent accompanied them during a shift behind bars and heard what responses they received from family and friends about the unusual job. (Lior Ohana, Yedioth Hebrew’s ’24 Hours’ supplement)
Israeli police gunfire left this Palestinian disabled. Now cops are back to harass him
After shooting Khalil Mahmoud in the head in 2015, disabling him for life, Israeli Border Police showed up in his home last week to summon him for questioning, no explanations offered. (Gideon Levy, Haaretz+)

Interviewers: So are you against annexation and unification of Jerusalem?
DY: "I was much younger then. Looking back, yes, definitely. Every unilateral step only made things worse."
You were the military secretary of the late Yitzhak Rabin, who unequivocally supported leaving the Jordan Valley under Israeli control and called it the strategic hinterland of the State of Israel.
DY: "He was right, but that does not mean it should be done unilaterally. Jordan's prime minister has already made it clear that a unilateral move will be very dangerous for the region. You need not hear it to understand that once Israel annexes 20% of the land, Israeli-Palestinian relations will become extreme to the point of a breakdown and we will face the need to take control over all of Judea and Samaria, which in my view is contrary to the interests of the State of Israel, while controlling 2.6 million Palestinians. The Jordanians are connected to the residents of Judea and Samaria, and there are very close family ties.  King Abdullah, on the basis of unilateral annexation without negotiations, will not be able to hold restrain.”
Why does it have to do with Jordan? King Hussein has already given up the territory. Why do they tell us what to do here?
DY: "They don’t decide. We need to look around and not to look at the problem through a straw. We must expand and understand the implications. The Jordanians are neighbors to Palestinians. In the past, King Hussein asked Rabin if he could be involved in all negotiations between Israel and the Palestinians. Rabin assured him that this would be the case. The Palestinians have an interest in knowing who will be the power on the other side of the Jordan River with whom they will have to cooperate.”
"My vision is that, in the end, we will have to give back the Jordan Valley if we want peace," Yatom explained. "If we still believe in peace, I think it will need to continue to control the Valley for a number of years and slowly transfer responsibility to an international power." He said the multilateral force should not prevent war between Jordan and Israel, but ensure that terrorist squads do not enter.
Will it prevent weapons and missiles from the entire Iraqi, Iranian and Jordanian territory to Highway Six [Hwy 6 goes along the much of the border with the West Bank.
DY: "According to (your) view, we should continue to control the Gaza Strip and go back to it."
That’s possible. You promised that the disengagement would bring security and in the meantime an army established itself there.
DY: "I don't know who ‘you’ are. To end the conflict between us and the Palestinians in the Gaza Strip, other ways need to be found."
Since when do we rely on international power? Look at what happened in World War II.
DY: “We’re talking about a multinational force whose base is American."
Your words are a little strange to me. If I had asked you about a defense alliance with the US, you would have told me that we should never depend on foreign power. That’s the IDF position. Now we put Israel's security in the hands of American soldiers? This goes against Ben Gurion's theory of security.
DY: “So you think that an if American force or a force that has a major American component along with a Palestinian or Jordanian force is patrolling along the West Bank it is putting the security of the State of Israel in jeopardy?"
Imagine if the Palestinian opens fire in the direction of Israel and the Israeli soldier accidentally hits an American soldier and kills him?
DY: "It's all a matter of priority. If any of you think things will be much better and be completely quiet here if we annex the Valley, you’re wrong. In my opinion, this is a better solution than not having an international power involved at all. You're talking about a situation where the IDF will have to re-conquer all of Judea and Samaria. Is that a better situation?”
Yatom explained that "the annexation of the Jordan Valley could lead to riots in Judea and Samaria, and also weakening of the Jordanian kingdom." According to Yatom, if there is a disarray within the Jordanian kingdom as a result of Palestinians taking to the streets over the Jordan Valley, then such a country, whose base is shaky, may invite, inter alia, Iranian involvement. Yatom concluded: "We may find not only the Jordanians on the other side of the (border Jordan) river but also pro-Iranian or Iranian militias. It's all a matter of priority."

'Israeli-American alliance is essential for the future of the world'
Texas Governor Greg Abbott visits Israel to see first hand just how Israel and Texas, despite being so different in size, are very much alike in everything else. (Interviewed by Erez Linn in Israel Hayom)