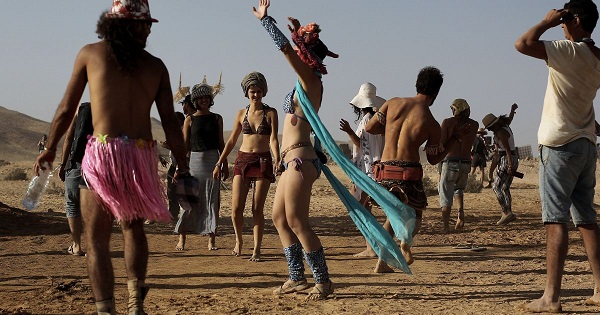 Quote of the day:
“This is a conflict zone under military rule which doesn’t permit and won’t permit residents from the area to attend. This isn’t an event organized from the outset with the cooperation of the Palestinians and I think that there's something really insensitive here.”
--Korhaa Yuval Itah, 39, a Midburn community member from Jaffa, explains why she opposes holding a 'Burning Man-style' festival in Area C of the Palestinian Territories.*
You Must Be Kidding:
“In my worldview, I don't see a world with borders, with lines between people...(and all the discussion about territories) from my standpoint are political issues that I don’t want to deal with.”
--Yaron Ben-Shoshan, one of the organizers of the Israeli 'Burning Man-style' festival in Area C of the Palestinian Territories, justified his plan.*


Top News Summary:
The Israelis stuck on a coronavirus-hit luxury cruise off Japan’s coast, the Palestinians, who withdrew their UN resolution against the Trump ‘peace’ plan and the Israeli politicians attacking each other in the race to the election finish line were top stories in today’s Hebrew newspapers, along with the 28-month prison sentence for Arab-Israeli Islamic leader, Raed Salah, for expressing his condolences at the funeral of the attackers, who killed Border Policemen at the Temple Mount in 2017. Joint List MKs called the sentence another act of persecution against Israel's Arabs and a "dangerous erosion of freedom of speech.” Oddly, what did not make news in the papers was the Associated Press report on Ynet website that the Shin Bet was accused of torturing Palestinians, who were round up in a sweep after the explosion set off that killed a Jewish teenage settler in the West Bank.

Today Palestinian President Mahmoud Abbas will address the UN Security Council against US President Donald Trump’s peace plan, but the Palestinians have withdrawn their proposed resolution against the plan, supposedly because it needs more revising, but likely due to lack of enough support to pass it. Meanwhile, Maariv reported, Abbas continued his efforts to mobilize European countries to reject Trump's peace plan and the European Union foreign minister met in Washington with senior White House officials to talk about the plan’s details. Busy campaigning for elections, Israeli Prime Minister Binyamin Netanyahu toured the Jordan Valley where he said that Trump's recognition of Israeli sovereignty there will 'definitely' happen. The plan has more detractors after a union of African leaders rejected it as 'illegitimate.’

Egyptian officials held a meeting Monday with Palestinian factions in Gaza to try to decrease the Palestinian violence from the Gaza Strip that has escalated since the release of the Trump plan and also due to the fact that Israel has yet to implement the long-term agreement. Yedioth/Ynet reported that Hamas head Yahya Sinwar skipped the meeting due to fears Israel might assassinate him, following Israeli threats yesterday. Hamas said it was not interested in an escalation, but a long-term arrangement must be reached soon. Following the meeting, the Palestinian factions decided to stop launching explosive balloons in Israeli territory, Maariv reported.

Features:
As temperatures plunge, elderly must choose between food and heat
Sub-zero conditions leave poverty-stricken pensioners with a dilemma, while some do not even have radiators or more than a single blanket their bed. (Amir Alon, Yedioth/Ynet)
As BDS runs rampant on UK campuses, Jewish students are fighting back
Until recently, anti-Israel events on UK university campuses went unchallenged. But the days when Jewish students remained silent for fear of harassment are over and they plan on changing the situation. (Eldad Beck, Israel Hayom)
Destination: From the Galilee to abroad
(Arab-Israelis) Dr. Ziad Dabur and his son Tarek want to expand the natural cosmetics company founded by the father in their town of Beit Jan and make it an international company. To that end, they met with a banker and Internet marketing specialist. "We only employ women, all from the Druze sector, who have had a difficult time integrating into the labor market," says Tarek. ”In order to employ as many women as possible, which is one of the principles of the business, we need to grow and become a very large industrial company." (Noam Perl, Yedioth Hebrew)

Commentary/Analysis:
Israel's top court decided not to disqualify Arab lawmaker, but its lack of conviction is disturbing (Mordechai Kremnitzer, Haaretz+) The Supreme Court deliberated too much over the case of Joint List lawmaker Heba Yazbak. Shamefully, when it comes to Kahanists, it had no trouble making decisions.
Israel’s President Implores Top Army Brass to Speak Up Despite Political Pressure (Amos Harel, Haaretz+) As Netanyahu vows to annex, Rivlin warns IDF officers that political deadlock may continue. The responsibility to put out the fires, he implies, rests with them.
The road is still long until we see Sudan's new face (Yitzhak Levanon, Maariv) If Sudan helps to solve the problem of infiltrators into Israel and also tighten its relationship with Egypt for regional stability, it can be determined that the meeting in Uganda was not for nothing.
Fueled by pathological self-pity, Trump and Netanyahu plot insurrections against democracy (Chemi Shalev, Haaretz+) Center-left moderates fight right-wing insurgents brandishing torches and pitchforks with legal arguments and righteous indignation.
4 decades after the Islamic Revolution, Iran is at a crossroads (Tamar Eilam Gindin, Israel Hayom) The revolution that brought the ayatollahs to power has, over time, created an identity crisis among ordinary Iranians, who see their country struggle between extremism and the desire to be accepted by the West.
Encouragement to be radicalized (Ben-Dror Yemini, Yedioth Hebrew) The approval of Heba (Yazbak)’s candidacy for the Knesset is the trampling of written law.
The judges who supported disqualifying Yazbak acted on the sentiment, rather than clinging to the ruling (Mordechai Kremnitzer, Haaretz Hebrew) Equal treatment of minorities is a supreme test of the court's action, and it has met with great urgency. Chief Justice Chayut previously ruled that “repugnance on the one side and reason for disqualification from running for election on the other hand,“but stumbled at her own test.
History will remember Abbas as peace rejectionist (Ambassador Danny Danon, Israel Hayom) The Palestinian leader seems to prefer fighting Israel in the international arena to promoting Palestinian interests that could facilitate statehood.
AIPAC Must Stop Bernie Sanders – at All Costs (Jonathan S. Tobin, Haaretz+) 'Never Bernie' AIPAC now sounds a lot like a pro-Trump caucus, not a bipartisan pro-Israel lobby. But it has no choice.
The deal within the 'deal of the century' (Alex Traiman, Israel Hayom) While opponents of Trump’s peace plan have accused Israel’s premier of making a diplomatic blunder with the US and failing to deliver on annexation, the two administrations have never been closer and delaying annexation until after Israel’s elections may actually play to Netanyahu’s advantage.
The Annexation Festival (Haaretz Editorial) The plan by members of Israel’s “Burner” community to hold a Burning Man-style event in April in the northern Dead Sea area, near the settlement of Almog in the West Bank’s Area C, has clear political implications that cannot be obscured by apolitical intentions. One of the organizers of the April event posted, “While the location is over the Green Line, recently they’ve been talking about annexing this land. So if in a momentary decision this could be inside the Green Line, there’s no cause for concern.” Speaking to Haaretz, he explained that he isn’t interested in politics, and that “All this definition of A, B and C are political issues and I don’t want to deal with them.” But his remarks ignore the fact that there is another party to the conflict. Like the right-wing government, the event organizers err when they think that an Israeli decision, even with American support, is enough to render the occupation, the settlements and annexation kosher.
The Plan of the Century may prevent a fourth election campaign (Yossi Ahimeir, Maariv) At least one good thing comes out of Trump's plan, which wakes up our sleepy election campaign: it sharpens the debate between the parties.
Enforcing Kashrut in the Israeli Army Is Racism and a Tool for Religious Coercion (Ram Fruman, Haaretz+) “Kashrut is friendship,” declares another absurd Israel Defense Forces document. This time it concerns instructions about the kashrut of the kitchens on missile ships. There is no kitchen staff on these ships, and the sailors themselves are the ones who are supposed to deal with bizarre demands, such as the “separation of challah” if dough is prepared from a quantity of 1,660 grams of flour or more, or a prohibition against baking pizza with yellow cheese. It turns out that this is part of their combat training. But kashrut is the last thing that could be called “friendship.” On the contrary, it is a means of segregation whose objective throughout the years was to make friendship between Jews and non-Jews difficult. In the State of Israel kashrut assumed a role it didn’t have in the past: forcing it on the other, the secular Jew and the non-Jew. There is nothing like the army to serve as a laboratory for these coercive relations. In the past year, and in recent months in particular, there has been a dramatic change in connection with kashrut enforcement in the IDF.