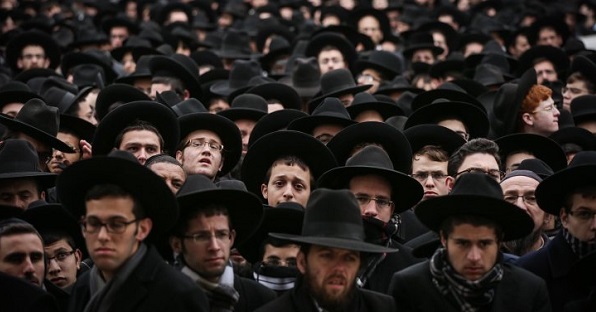 Numbers of the day:
36:33.
--Kahol-Lavan seats in Knesset vs. Likud seats in Knesset, were elections held in Israel on Monday.**
Front Page:
Haaretz
Yedioth Ahronoth
Maariv This Week (Hebrew links only)
Israel Hayom

Top News Summary:
Coronavirus was the top story in today’s Hebrew newspapers as the country seemed unprepared: Israelis arrived at Ben-Gurion Airport from Thailand without wearing masks and no one was there to enforce their house isolation. Israel banned foreigners coming from certain Asian countries from visiting, and a local hospital prepared to receive the Israelis coming soon from the ‘corona cruise.’ Also making headlines was the immunity the Knesset plenum gave to MK Haim Katz, who allegedly promoted legislation that would have benefited him personally while concealing apparent conflicts of interest.

Elections 2020 Quickees:
*Gantz's Kahol Lavan Widening Lead Over Netanyahu's Likud, Election Poll Shows
Kahol Lavan projected to get 36 Knesset seats; center-left alliance Labor-Gesher-Meretz is expected to receive eight seats. (Haaretz)
Gantz, Lapid vow to 'rehabilitate' relationship with Democratic Party, American Jews if elected
The Kahol Lavan leader says that possible land swaps and transfers of population between Israel and a future Palestinian state is the aspect of Trump's peace plan that mostly 'bothers' him. (Haaretz+ and Ynet)
Academics from the right-wing respond to the letter from left-wing academics: "Leave the decision to the voters"
120 right-wing academics, professors and Ph.Ds, signed a response letter to that of their 120 left-wing colleagues, who claimed that the President should not let Netanyahu form a government, if Likud wins the elections. (Maariv)
Israeli Police Won’t Be Investigating Most ‘Fake News’ Spread During Election Campaigns
Police will investigate cases of impersonation, incitement and document fraud, but noted that it's difficult to meet the legal burden of proving that fake news is in fact false. (Haaretz+)
Gaza Attacks Declined by 80 Percent? Haaretz Reveals How Bennett Misleads the Israeli Public
In a weekend TV interview, Bennett boasted of accomplishments he attributed to himself. A thorough fact check shows most were false, and likely meant to lure voters.(Haaretz+)
Disillusioned and Angry, These Left-wing Israeli Jewish Voters Plan to Vote for the Arab-led Joint List
The electoral alliance is also reaching out to Israel’s ultra-Orthodox community with campaign ads in Yiddish. (Haaretz+)
Chances of 4th election may be higher – and lower – than you think, experts say
If there is one thing senior political advisers agree on is that when it comes to Israeli politics, all bets are off. (Israel Hayom)
AIPAC confab's double whammy: Israel’s election and Super Tuesday
Israeli politicians and Democratic presidential candidates will likely be no-shows at the pro-Israel lobby's big policy conference, slated to begin March 1. (Haaretz+)

Features:
How Israel turned into a hacker haven
Immigrants from Russia and Ukraine find Israel is an easy place to gain citizenship, use stolen credit cards and test new viruses that are then used globally. (Amitai Ziv, Haaretz+)

Top Commentary/Analysis:
Massive Israeli Data Leak Is Treasure Trove for Iran Intel. It Can Jeopardize Mossad and Special Ops (Yossi Melman, Haaretz+) Israel boasts about its cyber capabilities and security. But what happened last week is criminal neglect that should alarm us all.
We will not give up the residents of the ‘triangle’ (majority Arab area in Israel) which was and will be part of democratic Israel (Yossi Ahimeir, Maariv) We identify with the citizens living in Kafr Qassem and Umm al-Fahm in their fight against the idea of annexing them to a Palestinian state. They are part of this state, and probably also “Palestine" will not ever be established.
Israel Has Failed to Address Severe Cybersecurity Issues, and Threats Are Imminent (Haaretz Editorial) For the second time in a week, a catastrophic breach has been discovered in the Elector app, which the Likud party is using to manage its get-out-the-vote campaign. The National Cyber Directorate and the Privacy Protection Authority were informed and took swift action. Yet the company, also named Elector, ignored the evidence it was shown, while Likud not only continued using the app, but promoted it at every possible event, even after the first information leak from it. The latest “contribution” to this failure came from Attorney General Avichai Mendelblit and the Privacy Protection Authority. Both of them argued that a petition to forbid Likud to use the app because of the information leaks from it should be rejected out of hand. Anyone who has been following this scandal has seen how even Israel’s highest values – privacy and security – are pushed to the sidelines when they contradict the political needs of the ruling party and Prime Minister Benjamin Netanyahu.
Stop Blaming Poland for Starting the Second World War (Sławomir Dębski, Haaretz+) Enough of the Brezhnev-era Soviet propaganda. Enough of the perverse, deceitful, intellectually dishonest attempts to blame Poland for WW2, and the Polish resistance for not halting the Holocaust.
Is the EU done with the Palestinian scam? (Shai Har-Zvi, Israel Hayom) It appears even the Europeans are fed up with the Palestinian method of "human rights activist by day and terrorist by night" – not to mention the demand to keep funding it.


Elections 2020/Netanyahu Indictment Commentary/Analysis:
For Kahol Lavan, All Israeli Arabs Have to Do Is Recognize They Were Wrong All Along (Chemi Shalev, Haaretz+) Take us, we’re ready, Arab leaders are saying. And what is the vast majority of Israeli Jews saying? Forget it. We were bluffing.
Israeli elections should be more than about war and peace (Shai Bazak, Yedioth/Ynet) The lines between left and right on security and diplomacy have long since blurred, and the voters must think about issues such as the cost of living, healthcare and civilian life when they cast their ballot on March 2.
After 40 Years in Power, Netanyahu's Party Is Still Fighting 'The Socialists' (Nehemia Shtrasler, Haaretz+) The prime minister's ‘new free-market plan’ is nothing but a collection of empty election campaign promises.
Bennett, Jewish terror and the politics of power (Nahum Barnea, Yedioth/Ynet) The defense minister has finally achieved his long-standing ambition of holding this coveted post, but now he finds his authority is undermined from the left and right, while settlers keep pressuring him to cater for their needs.
To Bring About Change, Israel's Arabs Need More Than Increased Representation in Parliament (Jack Khoury, Haaretz+) There aren’t that many other options left for Israel's Arab population. Voting in the general election with the goal of influencing the domestic Israeli political arena is the right tactic. Up to now, the Arab community has never exploited its electoral potential to the fullest, and until that happens, the extent of its influence will remain a matter of dispute. Increasing Arab representation to 15 seats or even beyond that could indeed bring about a change and dictate a new reality that neither Kahol Lavan’s Benny Gantz nor Prime Minister Benjamin Netanyahu could ignore. Practically speaking, that change is already taking place, at least in the media. When in the past had Arab Knesset members received so much exposure in the mainstream Israeli media?
The suspension of (right-wing) journalist Arel Segal proves that the atmosphere of shutting mouths prevails in television (Haim Misgav, Maariv) The punishment the TV presenter received from the public broadcasting corporation (KAN Channel 11), because of the video in which he sang and played guitar with his friends alongside Prime Minister Netanyahu, lit a red light for me and reminded me of Mapai days. As a native of this country, I still remember the rule of Mapai. Freedom of speech was never a strong point. Only those close to the party won everything that anyone at the helm has to offer.
In both Israel and the U.S., negative discourse has destroyed left-wing parties (Tzvia Greenfield, Haaretz+) Even now, when Israel’s fate depends on the upcoming election and when, under the cover of the title “head of a transition government” defendant Prime Minister Benjamin Netanyahu is liable to keep crushing Israeli society, it is important to direct our glance for a moment toward the United States and to draw conclusions from the astonishing spectacle of the Democratic Party splitting into two before our eyes.
Ex-Jerusalem mayor almost became finance minister. But then Netanyahu got cold feet (Sami Peretz, Haaretz+) Barkat was so close, but then the PM settled on nominating him in the future, maybe.
Prepared for APN by Orly Halpern, independent freelance journalist based in Jerusalem.
comments powered by Disqus