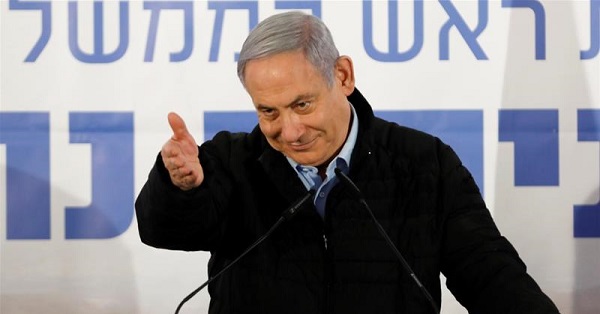 
You Must Be Kidding:
“We are missing 3 more (mandates) for victory. I will be very happy if I actually get them from the Arab citizens -- do you know why? Because I really believe in that, because we are working for all…”
—Israeli Prime Minister Binyamin Netanyahu called on Israeli Arabs to vote for him - despite all the slurs against the Joint List, whose members were elected by and represent Arab Israelis.*
Quotes of the day:
“Only a true racist like Netanyahu can think the Arab citizens are foolish enough to forget that only two months ago he wrote that we want to annihilate children and women.”
—Joint List Chairman MK Ayman Odeh said in response to the prime minister's comments.*

"Unlike those who aspire to replace Netanyahu today, Yitzhak Rabin had the moral courage to call a thing by its name. Just a few days before the assassination in Tel Aviv, he said that the demand for a 'Jewish majority' was racist."
—Arab-Israeli commentator Salman Masalha writes in an Op-Ed in today’s Haaretz+.**

Top News Summary:
After a delay, Israelis get off the ‘coronavirus cruise’ in Japan today and will arrive tomorrow in Israel (update: a fourth Israeli was tested positive and will remain in Japan for treatment and, meanwhile, Israel is enjoying the profits as cruise ships steer toward Haifa port and away from the Far East and the Gaza Strip government is also preparing a medical complex on the border with Egypt to quarantine Gazans returning from China) and Israeli Prime Minister Binyamin Netanyahu and his rival Kahol-Lavan chairman Benny Gantz continued to battle over the agenda ahead of national elections in 11 days - making top stories in today’s Hebrew newspapers.

What barely made the print news were the reactions to Israel easing sanctions on the Gaza Strip as part of the ceasefire arrangement with Hamas. The exception was Haaretz, which ran a front-page analysis by Amos Harel who wrote about how on the eve of Israeli elections, Hamas finally got the ease in sanctions it had been trying to get for so long as part of the ceasefire agreement. Yedioth/Ynet’s Elior Levy also wrote about that. (See Commentary/Analysis below.) Israeli Defense Minister Naftali Bennett told Ynet he was ready to “give Hamas a chance,” but also preparing for a military campaign that would result in 'a fundamental change' in Gaza. Maariv reported that Bennett also said, "We collect terrorists' bodies to put pressure on Hamas.” Yedioth’s southern reporter Matan Tzuri interviewed jubilant Gazan merchants who got a permit to leave the Strip Wednesday. “Everyone wants to work here (in Israel),’ they told him. The easing of sanctions took place despite the shooting by Islamic Jihad members in Gaza at Israeli soldiers over the Gaza border (no injuries), for which Israel struck back directly at the Jihad cell and not at Hamas, as it often does.


Elections 2020 / Netanyahu Indictment News:
Israel Hayom and Yedioth focused on the likelihood that a company that Gantz headed will be probed by the police, while only Haaretz pointed out in its headline that Gantz is not a suspect. Maariv’s political correspondent Anna Barsky wrote that the battle is over setting the agenda: Netanyahu is focused on avoiding all talk of his trial and is challenging Gantz to a televised debate, while Gantz is trying to keep the public eye on Netanyahu’s trial and refused to enter a debate, calling it spin. Indeed, the  main stories in the Netanyahu-supporting Israel Hayom were about the corona virus and Gantz’s former company. Gantz on Thursday denied any wrongdoing.

*Also of interest, Netanyahu is now trying to get Arab citizens to vote for him. The Prime Minister gave his first interview ever to an Arab-Israeli media network and vowed not to 'transfer' any Arab citizens to a future Palestinian state, despite that it’s part of the Trump plan and reportedly it was added at his request. Yedioth Hebrew reported on this interview in a two-page spread. "The idea of a transfer must be erased,” he told PANET. “There is no transfer and no one, neither Arab nor Jewish, will be displaced from his home. I object to it ideologically and practically. This will not happen." Netanyahu continued: "I cannot tell you how many times I have visited Arab countries, such as Amman. And in Uganda, I met with the President of Sudan. These were visible visits, but believe me there are many more, and relations are only getting closer.” Netanyahu also badmouthed the Joint List: "I think the story of Israeli Arabs is a story of great success and a story of great hope, and unfortunately those who hold them, or are trying to hold them and leave them behind and push them to dark corners, are the representatives of the Joint List.” Netanyahu claimed that since the establishment of the state there has not been a prime minister who has invested resources in the Arab public as much as he has and he promised to continue doing so.

Elections 2020 / Netanyahu Indictment Quickees:
Gantz's Party Gains Two-seat Lead Over Netanyahu's in Latest Election Poll
Survey shows parties loyal to Netanyahu with total of 56 seats – five seats short of a coalition after two previous inconclusive elections, according to a Channel 12 poll. The poll shows Kahol Lavan getting 35 out of the Knesset's 120 seats, with 33 going to Likud. (Haaretz+)
Despite Netanyahu's efforts only 43 of the Falash Mura will arrive before elections
In his effort to pander for votes among the Ethiopian community, Netanyahu pledged to allow 8,000 of the Falsh Mura community to Israel despite concerns from his ultra-Orthodox coalition partners and his AG's warnings this politically motivated decision could wait until elections are over
Of the hundreds promised, only 43 will arrive next week onboard a flight that will also include Likud ministers and members of Knesset. (Ynet)
Israeli Minister Tried to Push for Move to Postpone Netanyahu's Criminal Trial
Gilad Erdan wanted to initiate a process to unseal evidence in Netanyahu's cases, which could have significantly delayed the proceedings. (Haaretz+)
Senior Likud MK throws water on idea of Palestinian state
While the new US Mideast proposal "is better than anything we have seen over the last decades, a Palestinian state just a few miles from Israeli population centers is not part of my vision," says Likud MK Gideon Sa'ar. (Israel Hayom)
Peretz: "We will act for a regional peace conference immediately after elections"
The Labor-Gesher-Meretz leader Amir Peretz said "we will demand that in the basic principles of the government we sit in that the peace process be renewed within 90 days 'in the path of Rabin.'" MK Nitzan Horovitz: "Rabin's government was also supported by the Arab parties and that support led to equality and economic flourishing." (Maariv, p. 6)
Labor party veterans gathered to remember the days they managed to win. Shimon Peres was not mentioned
In the first place, the concept of this convention was a bit odd. “Members of the late Yitzhak Rabin's historic government," the statement read, "will convene together with Knesset members and candidates for Labor-Gesher-Meretz for a special conference entitled 'Returning to Rabin’s Path.’” Amir Peretz asked to return to Rabin’s path and to show that Labor and Meretz rule is not just a story of mythology. Instead, he found Beiga Shochat grumbling about the Likud and Raanan Cohen telling jokes with Uzi Baram. (Haaretz Hebrew)
Netanyahu apologizes to prominent right-wing rabbi after aide’s mocking
PM says sorry after his top political fixer, Natan Eshel, in bid to get extremist Itamar Ben Gvir to leave race, disparages religious leader and supporters with dismissive Yiddish prefix ‘sh’: ‘Druckman and Shmuckman.’ (Times of Israel)
“Binyamin the Friend of G-d“: The new Likud song reflects a deep and pathological madness - Likud warmly adopted the song of Ariel Zilber, who considers "The Prosecutor” an enemy and upgrades Netanyahu to the rank of God's friend. The gap between the new election campaign video clip and the previous campaign folds into it everything the Prime Minister has been through in recent months. (Dan Bar-On, Haaretz Hebrew)
Quick Hits:

Features:
Palestinian Artist Embroiders 'Inshallah' in Hebrew on Islamic Prayer Rugs
Nawal Arafat’s reworked rugs, now on show in Haifa, explore the complex interplay between Hebrew and Arabic. (Eness Elias, Haaretz+)
Households in Developed Countries Are Shrinking, Except in Israel
The global trend in developed countries toward having less children and living in smaller households presents economic concerns, but by bucking the trend Israel creates its own set of issues. (Dafna Maor, Haaretz+)

Top Commentary/Analysis:
Tel Aviv Billboards Exemplify Israeli Fascism (Gideon Levy, Haaretz+) I like reading opinion pieces by Nave Dromi. She’s straight-shooting, genuine, extreme, secular and doesn’t evade or equivocate: pure, distilled fascism, with no inhibitions and no masks. Who cares about The Hague. We’ll return to Gush Katif. Prime Minister Benjamin Netanyahu is the last defense against the legal system. The Palestinians must apologize, “and if it were up to me, we wouldn’t forgive them.” That’s what she is – an avowed super-ultranationalist fascist who believes the Jews deserve everything and the Palestinians nothing; that human rights are for wimps and that the entire land is hers. She’s much more honest than the prevaricators of the center left. I was impressed with her honesty even while reading her op-ed in Haaretz Wednesday (“We were right to hang billboards showing Abbas and Haniyeh as defeated terrorists”)…The essay summed up Israeli fascist thinking. Formulated more mildly, the op-ed could represent the prevalent view of the Israeli mainstream.
Mahmoud Abbas' map of lies (Ambassador Danny Danon, Israel Hayom) That Abbas brought this to the highest level of international diplomacy suggests that he believes that the world is ready to entertain this revisionist history of the Middle East. Sadly, in this regard, he may not be mistaken.
The empty promise of annexation (Meron Rapoport, Israel Hayom) The 'Deal of the Century' was supposed to be Netanyahu's ticket to re-election and out of prison. That may no longer be enough.
Reports on Israel's threats against Hamas officials should be taken lightly (Tal Lev-Ram, Maariv) In light of the continued rocket fire and the ballooning of the Gaza Strip, careful consideration should be given to publications in the Arab media regarding the planning of possible elimination actions by Israel.
It’s the Iranian Economy, Stupid: Regime Asks Voters to Swallow Another Bitter Pill (Zvi Bar'el, Haaretz+) Iranians will be voting in parliamentary elections this week that may provide a gauge of the extent of discontent in the country.
Turning human rights into a bad joke (Evelyn Gordon, Israel Hayom) The UN anti-Israel blacklist asserts that the most basic essentials – food, water, transportation, communication – raise "particular human rights concerns." But if every human activity is a "human rights concern," then nothing is.

Interviews:
‘We gave up on historic Palestine in exchange for nothing’
Bassem Tamimi, who has led popular protests in Nabi Saleh for more than a decade, says the two-state solution is 'no longer an option.' (Interviewed by Oren Ziv in +972mag)