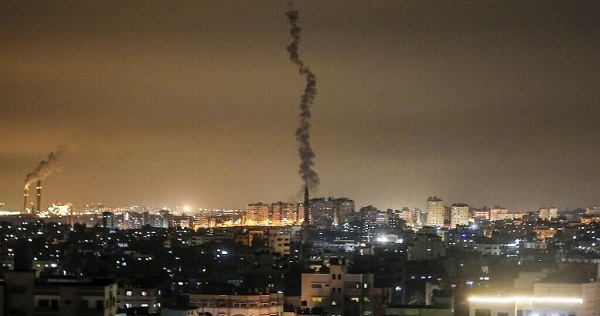 Quote of the day:
"He did not come looking for votes from us. He came to calm us down. He knows that frightened Arabs are going to the polls in droves.”
--Arab Israeli voter from Qalansawe town says that Israeli Prime Minister Binyamin Netanyahu fears mass the Arab vote.*
Front Page:
Haaretz
Yedioth Ahronoth
Maariv This Week (Hebrew links only)
Israel Hayom

Top News Summary:
Islamic Jihad shoots a barrage of rockets at Israel after Israeli army bulldozer is filmed dragging body of killed Jihad activist and Israel responded attacking Islamic Jihad targets (UPDATE: the exchange continues today and includes IDF attack of Jihad targets in Damascus), almost 1000 Israelis are in self-isolation as the fear of the spread of coronavirus rises following the visit of infected Korean tourists and for the first time, the Likud party gets more mandates than Kahol-Lavan following the announcement of the investigation into the company that Kahol-Lavan leader Benny Gantz headed - making top stories in today’s Hebrew newspapers.

Yedioth’s Yossi Yehoshua has an excellent summary (See Commentary below) of the violent chain of events that continues till now starting when Islamic Jihad activists apparently tried to lay a bomb near the Gaza border fence. They were shot dead by Israeli soldiers. But what Israeli military analysts agree is that the gruesome video of the IDF bulldozer picking up and then dragging the body of one of them is what led to the escalation (NOTE: Israeli main news websites have taken down the video posted and Maariv even blurred a photo of the body. However, MiddleEastEye has the video.) However, far right-wing Defense Minister Naftali Bennett boasted about the video that this is exactly what needs to be done, because Hamas holds the bodies of two Israeli soldiers. Bennett slammed the “hypocrisy on the bleeding heart leftists.” Abu Hamza, a spokesman for Islamic Jihad, threatened Israel following video saying“the Zionist enemy has attacked one of our fighters in the Gaza Strip in a barbaric and criminal way. This is a clear aggression and the enemy must bear its consequences." Then more than 20 rockets were launched as Gaza factions vowed to avenge the mistreatment of the militant's remains. Many of the rockets were intercepted. IDF responded striking Gaza. Egypt and the UN tried to broker a ceasefire. Israel closed schools, roads and train lines in the south. Today Israel targeted Jihad weapons factories in Damascus and Jihad in Gaza responded with more rockets. This all started just as Israel was about to ease numerous more of the sanctions on Gaza as part of the implementation of the long-term arrangement with Hamas. Yossi Yehoshua wrote that Islamic Jihad was acting to thwart that plan.


Elections 2020 / Netanyahu Indictment News:
With a week to elections, the sudden opening of an investigation into the defunct company formerly headed by Kahol-Lavan leader, Benny Gantz, has lowered his party's popularity. Israeli Prime Minister Binyamin Netanyahu's Likud party pulled ahead of Kahol-Lavan for the first time in polls. And meanwhile, the coronavirus is causing fears about voting in the upcoming elections. Still, 540 former Israeli Air Force pilots appealed to President Reuven Rivlin on Sunday asking that he will not task Netanyahu with forming a coalition, should he win in the upcoming March elections. The Sunday letter joins the Professors’ letter from early February. (Maariv) And Netanyahu is now appealing to marijuana users, saying, "I will advance erasing of criminal records of the thousands of Israelis over the use and possession of cannabis." (Maariv)

Features:
*"Netanyahu wants to put the Arab (Israeli) public to sleep. It won’t work for him"
Between the first and second elections, the number of residents of Qalansawe who voted jumped 40 percent. 96 percent opted for the Joint List, causing a dramatic change on the political map.  Seven days before the third round, when the idea of territorial exchange returned to public discourse under the auspices of the Trump plan, the residents of the ‘triangle’ are not impressed by the Prime Minister's reconciliation attempts: "He did not come looking for votes from us. He came to calm us down. He knows that frightened Arabs are going to the polls in droves.”  (Meirav Betito, Yedioth Hebrew)

Elections 2020/Netanyahu Indictment Commentary/Analysis:
On March 2, the Genuine Jewish Democrat Will Vote for Israel's Arab Citizens (Odeh Bisharat, Haaretz+) When they abuse Jews, I feel Jewish. When they oppress blacks, I feel black. When they engage in ethnic cleansing against Muslims, I feel Muslim. When they engage in attacks against Christians, I feel Christian. Yes, that’s what singles out the genuine democrat: No human suffering is foreign to him, no barrier of identity will separate him from those who are suffering. Next Monday the genuine Jewish democrat will overcome all the walls that separate the two peoples, and will give his vote to the most threatened ethnic group in the State of Israel – the Arab population.
In his despair, Netanyahu won’t hesitate to use any means to win (Orni Petrushka, Maariv) You must not be complacent and assume that the state government will provide protection against harm to the purity of elections. It must be appreciated that there are attempts, even dubious ones, to influence their results.
8 Days to Elections: Coronavirus Undermines Netanyahu’s Trump-style Smear Campaign Against Rival Gantz (Chemi Shalev, Haaretz+) The defamation offensive evokes both the 2016 Clinton email scandal and the allegations of Biden-linked corruption in Ukraine.
Benny Gantz is taking Israel back to the future (Joshua Leifer, 972mag) Gantz has become the face of the Israeli center today: racist, militarist, and committed to the perpetual subjugation of Palestinians on both sides of the Green Line.
Probing Gantz's Ex-company Is an Effort to Create False Symmetry With Netanyahu (Haaretz Editorial) The appointment of Dan Eldad as acting state prosecutor by Justice Minister Amir Ohana has produced quick results. Eldad is doing exactly what he was appointed for, just as Ohana is doing exactly what he was called on to do by the criminal defendant who appointed him, Prime Minister Benjamin Netanyahu. Two weeks after being named, without the recommendation of Attorney General Avichai Mendelblit, and even though it was only last week that Eldad learned details of the bankruptcy of Fifth Dimension, a cybersecurity company once led by Benny Gantz, the newly minted state prosecutor announced he was ordering the police to question company officials before next week’s election.
There's no good time to launch an investigation on Israel's political calendar (Yuval Yoaz, Haaretz+) The criticism of Acting State Prosecutor Dan Eldad began the minute he decided to launch a criminal investigation of the cybersecurity company Fifth Dimension. How easy it is to conclude that this is a “political” investigation – it obviously screams out due to the circumstances: Eldad was appointed, despite the opposition of Attorney General Avichai Mendelblit, by Justice Minister Amir Ohana, who is himself a personal appointee of a prime minister facing criminal proceedings, in a transitional government that is functioning without having obtained the confidence of the Knesset. On Thursday, less than two weeks before the election, Eldad decided to launch an investigation against a company that was headed by Benny Gantz, who is threatening to topple Prime Minister Benjamin Netanyahu.
Peddlers of propaganda (David M. Weinberg, Israel Hayom) Crass Israeli politicians like Yisrael Beytenu leader Avigdor Liberman are irresponsibly stirring anti-religious passions for electoral gain.
Islamic Jihad Strikes Netanyahu's Soft Spot a Week Before Israel's Election (Amos Harel, Haaretz+) The last thing the embattled PM needs is a violent conflict in Gaza - and paradoxically, even hitting the organization's No. 2 in Syria is less sensitive than bombing the Strip.

Interviews:
'Jewish mission to Saudi Arabia the result of 2-decade effort'
Much of the diplomacy takes place over time and under the radar, says Malcolm Hoenlein, longtime executive vice chairman of the Conference of Presidents of Major American Jewish Organizations, "by building meaningful relationships across the board. (Interviewed by  Alex Traiman in Israel Hayom)