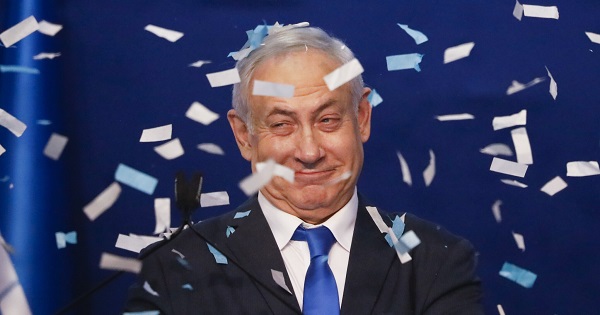 Quote of the day:
"Israel is a right-wing country, where racism is politically correct and personal corruption is irrelevant. When generals fresh from the army are the alternative, there is none. We must hope a true Jewish-Arab partnership will emerge."
--Gideon Levy in today's post-election Op-Ed.*
Front Page:
Haaretz
Yedioth Ahronoth
Maariv This Week (Hebrew links)
Israel Hayom

Elections 2020 :
The surprising turnaround of Binyamin Netanyahu, who after losing two elections, beat Kahol-Lavan by four mandates and won the Israeli elections, but lacks  - at the moment - one or two mandates to form a government, was the top story of the Hebrew newspapers, which almost solely focused on elections: the question of who will be enticed to defect to Likud (four MKs are in Likud’s crosshairs), the success of the mostly Arab Joint List, and the voters in self-quarantine, due to fear of having coronavirus, who voted at special polling stations - meanwhile, two more Israelis tested positive, bringing the total infected to 12.

The 10PM exit polls initially gave the right-wing bloc 60 seats - one seat away from a Knesset majority - with the Likud party receiving 37 seats, compared to Kahol-Lavan's 33 seats. But after 90% of votes were counted by Tuesday afternoon, Likud had 36 seats compared and Kahol-Lavan had 32 and the right-wing bloc had 59 seats. The figures show that Likud received 93,000 more votes compared to the September elections, and the Joint List received 60,000 more votes than the previous elections.

Netanyahu’s smiles were all over the front pages. He told his supporters it was a “night of great victory,” and indeed it was for them. Netanyahu's supporters called for Attorney General Avichai Mendelblitt, who indicted Netanyahu, to ‘go home.’ Benny Gantz told his supporters that he shared their pain and disappointment. At Kahol-Lavan headquarters, the knives came out as Gantz went under attack for the party’s failure.

The success of the Joint List, which received 15 mandates, was bittersweet for its members and supporters. "[The results] are a major success for the Joint List that executed the biggest election success in decades,” MK Ahmed Tibi, #3 in the Joint List said, adding that he was worried of a dark future if Netanyahu got enough mandates after the counting of the soldiers' ballots to form a government. Secretary-General of the Palestinian Liberation Organization Saeb Erekat said that Netanyahu’s victory was a victory for “settlement, occupation and apartheid.”

Interviews:
To heal the rifts: Former MKs speak about restoring people's confidence after the election
Three rounds of elections in a year have brought the disgust and distaste of citizens towards their elected officials to a negative climax. Can public confidence in politicians and politics be restored? Or is it too late for that? (Interviewed by Eyal Levy in Maariv’s magazine supplement, cover)
Former justice minister (Likud) Dan Meridor is considered in our districts to be an old-school politician - a gentleman, not a shouter, or one who rushes to throw slime at his rivals, he is a model that has been out of stock for many years.
DM: “In elections of 2013 I went to a house meeting for (Likud) primaries campaign (with potential voters) and told them what I think, that that a Palestinian state is unavoidable. The host told my assistant, ‘Tell Dan that I won’t support him because he speaks about two states.’ My assistant explained that Bibi also talks about that and the host answered, ‘But Dan means it.’ That’s the cynicism that I’m talking about and not just Netanyahu’s…There are also politicians today whom the public believes and there are those they don’t. But there is a problem that is developing. You tell voters what they want to hear and not what you really think, and that's how elections are won. They do it all over the world and not just here, but what is the role of a leader? To lead. In 1948, Ben-Gurion did not ask the public what it wanted. Menachem Begin, my teacher and mentor, did not ask the public what was right when he said the Supreme Court needed to be protected. Today there are no leaders.”
Haim Oron, former chairman of Meretz, is a left-wing representative who has for years followed the rules of the game.
HO: ”Good people are moving away from politics today," Oron is convinced. “A person who has made a career in academia, agriculture, public administration, can say what do I need (politics) for? After all, tomorrow I will they will infiltrate my phone. I will not be able to sit down on Friday night and tell my friends 'Miri Regev is a beast' because on Sunday I will find it in the paper…When was there a real debate about the things that are really in dispute? Not about who is afraid to bomb Iran, but should we bomb there, or stay in the (Palestinian) Territories? Or questions about the health system rather than election night slogans. If the status of Israeli politics and the Israeli politician is not upgraded, we will be on a very difficult track. What is happening now is not accidental. There are forces that have a vested interest in making all politicians thieves, suspects, who make no connection between what they say and what they believe in, because they believe in nothing but themselves. That's the way democracy eats itself.”
Can the image of Israeli politics be restored?
HO: “They said of Meretz that it is an honest party. None of us have been interrogated, or gone to prison, but there is no electoral bonus in that. I know many people today who tell me, 'You are an honest politician. If you thought differently, I would vote for you.’ Thank you very much, but if I thought otherwise I would no longer be an honest politician and I would start lying. For not saying what one thinks, there is Benny Gantz. I'm not saying he's dishonest, but there are big parties that don't say what they think and that's why Bibi is fooling everyone.  One must distinguish between parties that are more ideological and more sharply defined and between parties that are large in the first place and have a wide range of positions. The problem is that the center has become blurred. What is the real difference between Kahol-Lavan and Likud? ”