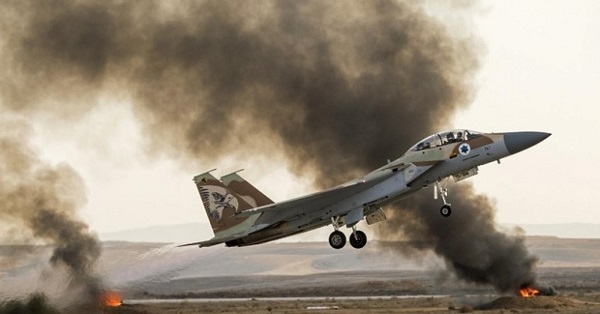 Quote of the day:
"Prime Minister Benjamin Netanyahu stood and scrawled his racism on the board for all to see. '58 seats for Zionist right, 47 for the Zionist left,' are, to his thinking, the election results and the basis on which a government should be formed. With the sweep of a marker, the prime minister erased the 575,500 citizens who voted for the Joint List alliance of Arab parties (20,000 of whom, incidentally, were Jews) and put them beyond the pale, as if they were lepers."
--In an Op-Ed, senior Haaretz political commentator Yossi Verter slams thinking that Arab citizens should be excluded because they are not Zionist.*
Breaking News:
Syrian soldier killed, 4 others wounded in alleged Israeli strikes in Quneitra, Homs
State media in the country reports that IDF jets fired a number of missiles 'from northern occupied Palestine' targeting airport, army sites; Qatari aircrafts were en route to Syria at the time of the alleged attack. (Ynet and Haaretz+)
Front Page:
Haaretz
Yedioth Ahronoth
Maariv This Week (Hebrew links only)
Israel Hayom

Top News Summary:
Between 50,000 to 100,000 Israelis are in home quarantine after Israel declares more severe guidelines and a teen who went to a soccer match was found infected. Meanwhile, after the count of 99% of the votes, the right-wing bloc loses one seat and Kahol-Lavan gains it, making it clearer that a fourth election is a possibility, particularly since potential defectors have told the press they have rejected Likud advances, and now, the center-left bloc wants to pass a law that would prevent an indicted person from forming a government.

Prime Minister Binyamin Netanyahu declared that Israelis returning from western Europe will be quarantined, told people not to shake hands and instead to use the Indian ‘namaste’ hands-pressed-together greeting. Israel’s chief rabbi told Jewish citizens not to kiss mezuzahs and Purim holiday parades and events set to take place next week have been cancelled across the country. (Maariv) Also the first Knesset Member is in isolation, Yoaz Handel (Kahol-Lavan) entered home isolation after returning from Austria. (Yedioth Hebrew)

Elections 2020 / Netanyahu Indictment News:
The final results of the ballot counts from the coronavirus polling stations yesterday gave a big advantage to Kahol-Lavan, which won another seat at the ultra-Orthodox Shas party's expense. That put Netanyahu's right-wing bloc down to 58 seats and not the 60 predicted at the time of the exit polls, and now three seats away from forming a narrow government.

Meanwhile, Kahol-Lavan and Labor-Gesher-Meretz are considering passing a law barring an indicted prime minister from serving. It would only be applied in the next Knesset. Together with the Arab Joint List and Avigdor Lieberman's Yisrael Beiteinu they have 62 seats, one seat more than needed to make a majority. A draft of the bill would state that “the president cannot assign the formation of a government to a member of Knesset who is under indictment on which the court has not ruled by that time.” Netanyahu backed a similar bill in 2008 during then-prime minister Ehud Olmert's criminal investigations. Haaretz+ explains that a Knesset majority for the bill is not enough. Kahol Lavan will have to gain control of the Knesset committee that makes various decisions right after an election. Netanyahu accused Gantz of “undermining democracy and the voter’s will.” He asked the Knesset Speaker Yuli Edelstein to “Examine ways to prevent legislation against me.” (Maariv) The possible bill has already been dubbed the “Netanyahu Law.” An MK from the Joint List said that his party would pass it “only if the Kaminitz Law is canceled.” (Maariv) Meanwhile, three female MKs said they rebuked proposals and suggestions from the Likud to defect. (Yediot Hebrew)

Separately, Haaretz+ reported that Netanyahu knew that a business intelligence firm had been hired to spy on Kahol Lavan leader Benny Gantz.

Features:
The Israeli who will try to conquer the UN - For the first time ever, an Israeli will run for a seat on the United Nations Specialist Commission for People with Disabilities. The candidate is Odelia Pitosi, who from her birth suffers from muscular dystrophy. All the Committee members are disabled. Pitusi, 42, a resident of Bat Yam, is paralyzed in her lower body, her hands are limited, and she has difficulty breathing. Despite all the limitations, she is a very active woman when it comes to the rights of people with disabilities. She works as an art therapist, taking care of children with and without disabilities. The elections will take place in June, during which 14 candidates from different countries will compete for nine places. The Foreign Ministry in Jerusalem estimates that Pitusi's chances of being elected are very good. She said yesterday: "It is important for me to make heard two voices in the UN Committee - the experience of being a child with a disability, and the voice of women with disabilities. (Yedioth Hebrew)
Lowering profile
The number of recipients of mental health exemptions from the IDF is rising. Experts explain why this is mainly the parents fault. If you ask officers from the IDF mental health unit, a spoiled generation is being raised here. But not just spoiled - a generation that is simply too spoiled for the military. And the parents have only themselves to blame. "There are more exemptions for reasons of mental health today," says Haim (pseudonym), who serves as a reserve captain for over a decade. "Our commanders did not tell us, 'Now you will give more soldiers a profile 21,’ [reference to grading system based on physical, mental and psychological capacity - 21 means no need to go to the army. - OH] This is something that Israeli society encounters as a major change - parents work for the children and prevent them from coping, and in the military you have to deal with yourself. When I was a soldier, I don't remember people aged 17 - 18 sleeping with a mother in bed. I get parents today telling me, 'Until this year, this young guy slept with us.' (Gilit Kozba, Yedioth Hebrew)

Other Commentary/Analysis:
Refugees Are Erdogan's New Diplomatic Leverage, but Numbers He Shows Don't Add Up (Zvi Bar'el, Haaretz+) Turkey has received 6 billion euros that are meant to help fund the humanitarian aid it provides refugees. So why is it claiming the EU didn't pay up?