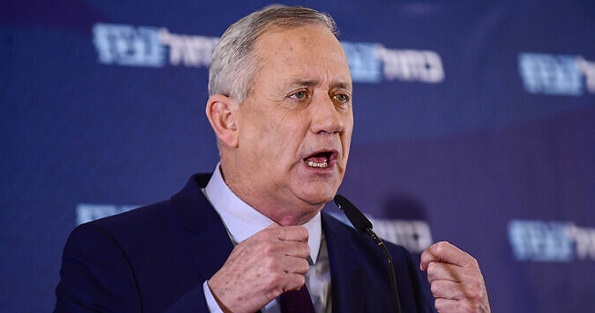 You Must Be Kidding:
“You have to understand that before we showed up, knees were the hardest thing to rack up. There was a story about one sniper who had 11 knees all told, and people thought no one could outdo him. And then I brought in seven-eight knees in one day. Within a few hours, I almost broke his record.”
—Eden, who completed his military service in the IDF as a sniper, is one of six snipers who tells about his experiences shooting Palestinian demonstrators on the Gaza Strip border fence, where he was stationed much of his service.**


Top News Summary:
As the coronavirus spreads in Israel and the Palestinian Territories and Israel takes more concrete actions, there are signs that the left-center parties were examining a way out of the political deadlock that would make Kahol-Lavan leader the prime minister - making top stories in today’s Hebrew newspapers along with the horrific murder of a baby girl by her father, who also tried to kill his wife and other daughter.

Four more Israelis were diagnosed with coronavirus in Israel, bringing the number to 25 (actually one of them is a Palestinian from E. Jerusalem), while the number in quarantine topped 80,000. Israel cancelled large Purim festivities, put over a thousand soldiers in quarantine and put additional European states on its watch list, ordering all Israelis who returned from them to self-quarantine for two weeks and barring citizens from those countries. Israel also was considering adding the US to that list of coronavirus countries, but for political reasons - i.e the fear over the Trump administration response - the decision was postponed. (Also Maariv) Birthright also stopped all its trips to Israel. And after a group of 21 Greek pilgrims visiting holy sites infected the E. Jerusalem bus driver (who is in serious condition) as well as infecting Palestinians working at a hotel in Beit Jala, near Bethlehem, and at least one Israeli, Israeli and Palestinian officials held a rare meeting to discuss joint efforts to curb the virus. Israel put a closure on Bethlehem and so did the Palestinian Authority and Bethlehem has turned into a ghost town. (News Nosh’s editor tried to visit neighboring Beit Sahur Saturday, but was turned back by Palestinian police wearing medical masks.) And now 13 US citizens are quarantined in the same hotel Regardless of the lockdown on Bethlehem, the whole West Bank and the crossings into the Gaza Strip are under Israeli closure as of midnight tonight until midnight between Wednesday and Thursday during the Jewish holiday of Purim.

With the help of Israel, some 3000 tourists visiting Israel and the Palestinian Authority departed Israel Friday and Saturday at the request of several embassies and consulates. Netanyahu said he will enlist youth and the military to assist in disinfection efforts in public places, while the Air Force will be tasked with ensuring supply of vital materials including medicine. Meanwhile, Israelis were stocking up on food from the supermarket, and the virus was taking an economic toll on El-Al and the tourism sector, as well as people working in the field of holding events and celebrations for large groups.


Elections 2020 / Netanyahu Indictment News:
One half hour after Israeli Prime Minister said on national TV that his rivals, Kahol-Lavan leader Benny Gantz and Yisrael Beiteinu chairman Avigdor Lieberman, were trying to ‘steal’ the elections from the voters through ‘undemocratic' moves, Gantz said on TV that he wants ‘to end the Netanyahu rule’ and that he is trying to form a government. According to reports, it would be a minority government with the backing of Yisrael Beiteinu and the Joint List. Maariv reported that there was fear that the situation would escalate to violence after multiple cases of incitement and threats were made against Gantz on social media networks and photos of Netanyahu in Nazi uniform were posted. The Knesset Guard chief tightened security around Gantz. Lieberman said the reason why he decided he would put his support behind Gantz as prime minister, instead of insisting on a unity government as he did in the last election was because the prime minister was behind the seven complaints filed to the police, the state prosecutor and the tax authorities against him in 2019. “There is no forgiveness for this, even on Yom Kippur,” he said, according to a report by journalist Dana Weiss quoted in Maariv.

Features:
Gideon Levy Gazan girl fighting cancer died after Israel denied her parents' visit. She won't be the last
Miral, the 10-year-old Gazan cancer patient whose parents weren’t allowed to be with her in a Nablus hospital, died last weekend. Now Israel is keeping another young Palestinian, who has leukemia, from receiving vital treatment. (Gideon Levy, Haaretz+)
The woman in the tank won
They loaded shells, fired at distant targets, operated in complex terrain conditions, and after intensive training, became the first female tank commanders in the IDF. But the pilot program they participated in was criticized and frozen, and the female tankists had to petition the High Court to keep their combat overalls. “Judge us by abilities,” they demand. “We fell in love with what we did, we gave it our all.” (Chen Artzi-Srur, Yedioth Hebrew)
Counterfeit Egyptian Money, Stamps and Poisoned Wells: When Young Israel Stirred the Water of the Nile
A new book sheds light on some of the most adventurous and dangerous plots planned and carried out by agents to harm Gamal Abdul Nasser’s Egypt in the years leading up to the capture of group of Egyptian Jews working for Israeli intelligence. Those Jewish Egyptians were part of the failed operation which came to be known as esek habish (“the rotten business”), or the "Lavon Affair”, that shook up the Israeli security and political establishments for more than a decade, and sparked developments that led to the resignation of then-Prime Minister David Ben-Gurion. Information that I reveal in a new book, published after a lengthy legal battle, shows that the operating patterns that led to the scandal were not unique, but rather systematic Israeli intelligence methods used against Egypt during the years before the failed operation – and to some degree afterward. They included poisoning wells, counterfeiting currency and stamps, psychological warfare, political murders and drug sales. (Yossi Melman, Haaretz+)
Is Linda Sarsour anti-Israel? Her book says something else
The Investigative Project on Terrorism examines the gap between the flowery hype aimed at driving Sarsour's book sales and the uglier reality about her message. (Steven Emerson, Israel Hayom)
The findings from a furniture store that got a Netanyahu ally in trouble
David Bitan has denied the suspicions, but the Likud legislator will be tried for graft pending a hearing. Transcripts reveal the police's tough questioning and his tentative answers. (Josh Breiner, Haaretz+)

Other Top Commentary/Analysis:
The Israeli Army Doesn't Have Snipers on the Gaza Border. It Has Hunters (Gideon Levy, Haaretz+) They’re the best of our boys. One is a “musician from a good high school,” another a “boy scout” who majored in theater.” They’re the snipers who have shot thousands of unarmed protesters along the Gaza border fence. In the Gaza Strip there are 8,000 permanently disabled young men as a result of the snipers’ actions. Some are leg amputees, and the shooters are very proud of that. None of the snipers interviewed for Hilo Glazer’s frightening story in Haaretz (March 6) has any regrets. If they are feeling at all apologetic it’s because they didn’t spill more blood. One was mocked in his battalion with “here comes the killer.” They all act like murderers. If their actions don’t show it – more than 200 dead as a result of them – then their statements prove that these young men have lost their moral compass. They are lost. They will go on to study, to have careers and to raise families – and will never recover from their blindness. They disabled their victims physically, but their own disabilities are more severe. Their souls were completely twisted. They will never again be moral individuals. They are a danger to society. They lost their humanity, if they ever had it, on the shooting berms facing the Gaza Strip. They are the sons of our friends and the friends of our sons, the young people from the apartment across the hall. Look how they talk.
Qatari cash for Hamas will backfire on Israel (Udi Levi, Israel Hayom) Given the ongoing payments to the Islamic terrorist group controlling the Gaza Strip seeking to maintain the calm on the southern border, one has to wonder what may happen when Hezbollah seeks a similar deal to for a lull on the northern front.
The connection between Iran's nuclear bid and regional aggression (Ron Ben Yishai, Ynet) IAEA report indicates stockpiling of low enriched uranium increases, demanding Israel and the U.S. prepare a coordinated response to an imminent threat.
Coronavirus in the Middle East: It's Not All Bad News (Amos Harel, Haaretz+) The coronavirus crisis has one positive aspect: A calming effect on the region's battlefronts. But there is one exception – the humanitarian disaster around Idlib.
Only experienced leadership can deal with Iran (Avraham Gover, Israel Hayom) Israeli political blocs must find a way to work together to counter this tangible threat. Netanyahu's experience and diplomatic ties are essential in playing this aggressive chess game with none other than the nation that invented it.
Why Abbas rejects Trump's deal - and any other deal with Israel (Benny Begin, Haaretz+) Abbas’ vehement objection to the American move is understandable, as it represents a concrete withdrawal from some major components of proposals made by the U.S. and Israel over the last 20 years in attempt to attain a peace agreement between the parties. But the fact is that none of these proposals brought about the hoped-for accord. Hence, as a reality check, it is worth revisiting the PLO’s reaction to the last Israeli proposal, presented by the prime minister of Israel at the time, Ehud Olmert, to Mahmoud Abbas on September 16, 2008, a proposal that went even further than the compromise proposed by U.S. President Bill Clinton in 2000, which was accepted by then-Israeli prime minister Ehud Barak.
Syria conflict is shifting from a proxy war to a clash of superpowers (Zvi Bar'el, Haaretz+) A series of strikes has sparked recriminations between Turkey and Russia, and the threats that come with them will have to be defused to avoid direct violent conflict.


Interviews:
**’42 Knees in One Day': Israeli Snipers Open Up About Shooting Gaza Protesters
Over 200 Palestinians were killed and nearly 8,000 were injured during almost two years of weekly protests at the Israel-Gaza border. Israeli army snipers tell their stories. Of the dozens of snipers that we approached, six (all of them discharged from the IDF) agreed to be interviewed and to describe what reality looks like through their gun sights. Five are from infantry brigades – two each from Golani and Givati, one from Kfir – plus one from the Duvdevan counter-terrorism unit. The names of all of them have been changed. They are not out to “break the silence” or to atone for their deeds, only to relate what happened from their point of view. In Eden’s case, even the fact that he also killed a protester by mistake doesn’t rattle him. (Interviewed by Hilo Glazer in Haaretz+)

"My dad bragged about me all over the village"
Nussi Sama'an Sabaga, a mother of three, decided she had to challenge herself and think and act out of the box. Today she is head of a ward at Hermon Prison and the first female Arab officer in the Israel Prison Service. (Interviewed by Lior Ohana in Yedioth Hebrew)

As Israel’s Left Wing Implodes, a Giant of the Camp Says Farewell
Meretz legislator Ilan Gilon, who just missed making it into the Knesset, is one of the last veterans of Israel’s progressive glory days. (Interviewed by Jonathan Lis in Haaretz+)