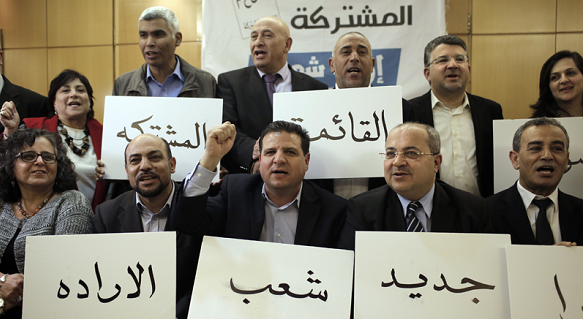 Quote of the Day:
“Either we enter negotiations with Gantz through the front door or we don’t enter at all.”
--A member of the Knesset of the Arab Joint List said, expressing anger that Kahol-Lavan leader Benny Gantz appeared to be concealing that he would be negotiating with them to get their support for him to be prime minister.*

"The talk by (Joint List leaders Ayman) Odeh, Ahmed Tibi and their friends about discrimination and racism are demagogic and unconvincing, but the fact is that it encouraged Arabs to go in droves to the polls."
--Maariv commentator Yossi Ahimeir writes that Arab citizens face no discrimination in Israel and that he can't understand why they elected representatives that say they do.**
Front Page:
Haaretz
Yedioth Ahronoth
Maariv This Week (Hebrew links only)
Israel Hayom

Top News Summary:
Coronavirus and the political deadlock continued to be the top two stories with 39 people infected in Israel the Tel-Aviv stockmarket plummeting and Prime Minister Binyamin Netanyahu refusing out of deference to US President Donald Trump to allow the Health Ministry to put the US on the list of countries that arriving from them requires going into self-quarantine, while Kahol-Lavan leader Benny Gantz makes plans to form a minority government.

Elections 2020 / Netanyahu Indictment News:
Kahol-Lavan leader Gantz agreed in a social media post to the terms of Yisrael Beiteinu Chairman Avigdor Lieberman (also in a social media post) for entering a government and “apparently” (Ynet) ordered his coalition negotiators to prepare for talks with the Joint List about getting their support for recommending him to be prime minister. The plan, writes Yedioth’s Nahum Barnea, seems to be that Gantz will form a government with Labor-Gesher-Meretz and Yisrael Beiteinu and with the Joint List supporting it from the outside so that it can replace the Likud appointed Speaker of Knesset and pave the way to change the law that would prevent Netanyahu from being allowed to form a government due to the indictments against him. Afterward, Kahol-Lavan would be able to form a unity government with the Likud or some of its members.

The problem is that Kahol-Lavan MKs Yoaz Handel and Zvi Hauser oppose the creation of a minority government that is supported by the Joint List and want to make a unity government with the Likud, immediately following the approval of the proposed law preventing Netanyahu from forming the next government, were it to pass. Sources in Kahol-Lavan told Maariv they were angry with the MKs' behavior, saying it was “serving Netanyahu."

*And Joint List members were furious that Gantz appeared to be hiding his plan to negotiate with them. “Either we enter negotiations with Gantz through the front door or we don’t enter at all,” said one Joint List MK. “They must talk to us in the same manner in which they talk to other parties. There will not be deals inked in dark rooms,” he said adding the party will not be “a punching bag” for Kahol-Lavan MKs when it's politically beneficial for them. Maariv’s Ben Caspit wrote that out of the four ‘cockpit’ leaders of Kahol-Lavan, Gabi Ashkenazi also opposes a government depending on the Joint List’s support. Meanwhile, the Joint List said it will only discuss endorsing Gantz after Gantz makes a formal request.

**Likud people have been attacking the possibility of Kahol-Lavan forming a minority government with the Joint List's support and Foreign Minister Yisrael Katz did so again by defaming the members: “They opposed the decision of the Arab League to recognize Hezbollah as a terrorist organization. They are terrorists in suits or supporters of terrorists in suits." Joint List chairman, Ayman Odeh, responded: “In the Likud there are losers with ties." Jewish Joint List MK Ofer Kasif said, "You and your friends are terrorists who exercise all the power of the state against the citizens of the state and against the Palestinian subjects of the occupation.”Joint List MK Hiba Yazbak said Katz was making “unbridled incitement.” (Maariv)

Elections 2020 / Netanyahu Indictment Quickees:
Attorney General Mendelblitt: "The gatekeepers must be loyal to the public interest" - Two weeks after Temporary State Attorney Dan Eldad hurriedly announced his decision to open an investigation into the “Fifth Dimension" affair (former company of Kahol-Lavan leader Benny Gantz), Eldad had not yet instructed the police to open an investigation, and did not even appoint it an attorney, as is normally done with sensitive investigations. Attorney General warns: "Gatekeeper whose loyalty is to the political rank that appointed him cannot fulfill his job." Senior prosecutors say that Eldad is under-performing. According to them, he does not hold meetings with the administration of the State Attorney's Office and does not inform it of his moves. "Eldad has been appointed by Minister of Justice Ohana contrary to the Attorney General's position, and he is not making any attempts to defend the justice system against the attacks of the Prime Minister's associates." (Yedioth Hebrew)
Netanyahu Appeals for Delay to Trial in Corruption Cases - Rival Benny Gantz blasts prime minister for allegedly attempting to evade trial, says 'it has begun.’ (Haaretz+, Maariv and Ynet)
Stop the gush: Posts with content suspected of incitement will be investigated by police - From a meeting held by the Attorney General and the temporary Police Commissioner, it was agreed that any insulting post distributed on social media networks, and which may lead to violence, will be investigated by the police. (Maariv)
Ex-Shin Bet Head Says Agency Should Provide Gantz Protection Due to Incitement - The police are also expected to recommend that investigations be launched against social media users who have been calling in recent days to attack Gantz. (Haaretz+)
In Jerusalem Protest, Netanyahu’s Backers Play Offense, Opponents Play Defense -  ‘Balfour is ours and we’re not giving it up,' chant PM supporters -  “These are our weapons,” said one woman, waving Likud flag alongside Israeli flag, who had come to demonstrate along with other supporters of Likud and Prime Minister Benjamin Netanyahu. Across the street was a similar number of demonstrators from the Movement for Quality Government, which had erected a protest tent. (Haaretz)
MK Mansour Abbas: "If Netanyahu declares that the Arab vote is legitimate - we can move forward" - The Knesset member from the Joint List was interviewed on KAN 11 News and referred to the possibility that his party would recommend MK Benny Gantz as prime ministerial candidate: "Hope we get a Kahol-Lavan proposal in the coming days.” (Maariv)
Time to abolish Law of Return, Arab MK says - Joint Arab List MK Aida Touma-Suleiman: The law is unnecessary. At the time, it greatly wronged my people, but now it's time to rethink it – and many other things. (Israel Hayom)
MK Toumeh-Sliman: "Support (for Gantz) from the Joint List is conditional on passing on the Deal of the Century” - Members of the faction are expected to convene to discuss the issue of granting the mandate and the conditions they will pose for such a recommendation. Balad Chairman: "We will not recommend without commitments. Repeal of the Jewish Nation State Law is a prerequisite.” (Maariv)
Did the Palestinian Authority push up voter turnout for Arab Israelis? - The unusually high voter turnout in east Jerusalem neighborhoods, together with a meeting three and a half weeks prior to the March 2 election between Joint List members, Islamic Waqf representatives and PA officials, indicates possible coordination. (Israel Hayom)
'Look Beyond the Veil', Says Israel's First Hijab-wearing Lawmaker - Iman Yassin Khatib will serve as one of 15 lawmakers from the Arab-majority Joint List slate which one a record number of seats in last week's election. (Agencies, Haaretz)
On International Women's Day, a Look at Female Representation in Israel's Parliament - A report published by the Knesset’s research center shows the rise and fall of women's presence in Israeli politics, placing the country 83rd globally. (Haaretz+)

Features:
We Tried Having a Peaceful Vacation on the Israel-Lebanon Border
Metula may look like a typical European village, but this picturesque Israeli town is surrounded by an international border. Now its residents want to revive tourism here. (Moshe Gilad, Haaretz+)

Other Commentary/Analysis:
What is stopping Europe from challenging the ‘Deal of the Century?’ (Robert Swift, 972mag) The EU's fixation on the two-state solution has detached it from changes in Israeli politics and U.S. policy. It has the clout to act, but does it have the will?
As Iran's Coronavirus Death Toll Rises, There's One Thing Its Regime Can Be Grateful For (Zvi Bar'el, Haaretz+) As some 23 Iranian lawmakers catch coronavirus, one of the faces behind the 1979 U.S. Embassy hostage crisis is the latest to die of COVID-19.
The Shiite crescent and the coronavirus (Hillel Frisch, Israel Hayom) Regarded by Tehran as a key tool with which to penetrate and ultimately conquer the Arab world, the Shi'ite crescent is fast becoming a boomerang, spreading the epidemic out of and back into Iran.

Interviews:
Ex-Shin Bet Chief Predicts Israel's Future: Either Bad, or Very Bad
If Israel adopts the Trump plan, it will trigger a right-wing messianic ideology that will spark chaos – declares Carmi Gillon, who asserts Jewish terrorists are no longer on the margins. Just days before the vote this week, Gillon appeared in a video with five other former heads of the Shin Bet and of the Mossad, in which they explained how dangerous Netanyahu is. But this was not a clear endorsement of Gantz, according to Gillon. CG: “I believe, but also know that he is… how to put it, a mediocre person,” he says of Benny Gantz. “And he is also busy with survival. Even when it came to the post of Israel Defense Forces chief of staff, he really wasn’t the first choice, and rightfully so. However, political life maneuvered him; it wasn’t the other way around. And sometime in the very near future, he will have to decide about the Trump plan. Let’s say the Israeli government adopts it fully, including partial withdrawal from Judea and Samaria [the West Bank]. That is the moment that will be a trigger for right-wing messianic ideology to act, to create chaos through attacks by a new underground.” Still, Carmi Gillon doesn’t want to give up and leave – or wait for the apocalypse. “I still believe in this great idea, the State of Israel, and in the need and in the ability to return to sanity: to return to the 1967 borders, to focus on building a different, better society,” he says. (Interviewed by Ariana Melamed in Haaretz+)