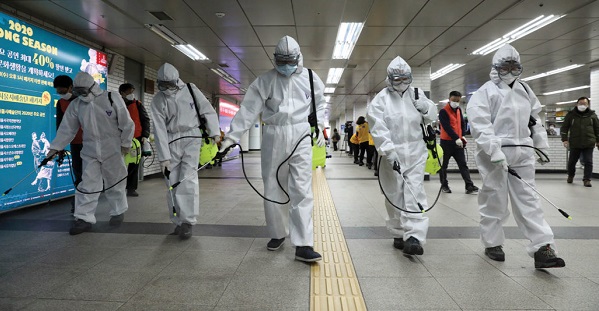 Quote of the day:
“In the State of Israel, there are no half-citizens. There are deep disagreements, but no semi-citizens.”
—President Reuven Rivlin said Wednesday, leveling criticism at the heads of the parties over their apparent disdain for the Arab electorate.*
You Must Be Kidding:
"This report brings the region closer to peace because as it has been said repeatedly, peace can only be built on a foundation of truth, anything else will crumble and fail."
--Trump Administration officiabolishal told 'Israel Hayom' in regards to the policy change, according to which Palestinians of East Jerusalem are no longer considered Palestinian. They are now referred to as "Arab residents of Jerusalem."**

Top News Summary:
Coronavirus has conquered the news pages of the Hebrew papers and the outrage over the refusal by MK Orly Levy-Abekasis to support Kahol-Lavan leader Benny Gantz to form a government with the support of the Arab MKs dominated Op-Ed pages in today’s Hebrew newspapers. Barely making the news was the killing of a Palestinian teen from Beita village, who was shot in the face by Israeli forces. Little was reported on why the teen faced off with hundreds of other Palestinians against visiting settlers and the soldiers. More information below.

The number of infected hit 100 by Thursday afternoon. Gatherings were limited in Israel to 100 people. And so for the first time since Israel's inception, the traditional Independence Day torch-lighting ceremony held on Mt. Herzl in Jerusalem will be held without an audience, as will the Israel Prize ceremony. Israeli Prime MInister Binyamin Netanyahu announced a $2.9 billion package to help collapsing businesses and the healthcare system, and doctors say there aren't enough staff or virus tests. Moreover, due to the lack of tests, strict guidelines have prevented medical staff from testing sick people, who became even more sick before finally being tested and diagnosed. An Israeli research center announced it developed a vaccine.

Elections 2020 / Netanyahu Indictment Quickees:
WATCH: Left and right activists protested in front of Orly Levy-Abekasis’ home - Dozens of left-wing activists shouting "Shame on you. Not with my vote!” and waving signs in front of the Gesher Party chairman's house. Soon a counter-protest was organized by right-wing activists who expressed support for Levy-Abekasis statement. (Maariv)
Gantz's Reps Meet Arab Alliance to Discuss Forming Government - Gantz's efforts to oust Netanyahu take blow after member of Labor-led slate disavows support for cooperation with Arab party. (Haaretz+ and Maariv)
Gantz's Party Changes Course as Efforts to Form a Minority Government Face Hurdles - In a bid to pass legislation barring an indicted lawmaker from becoming PM, Kahol Lavan plans to replace incumbent Knesset speaker. (Haaretz+)
'Sometimes You Need to Make Deals With the Devil': Arab Israelis Stand Tall After Election, but Warn Against Fourth Round - Arab voters drove big gains for Joint List alliance, but there is no consensus on what approach (or side) it should take in order to effect change and help Arab society. (Judy Maltz, Haaretz+)
Chairman of the Ra’am party (component of Joint List): "Purpose of Meeting with Kahol-Lavan:  Establishing Blocking Bloc with Extensive Agreements" - Ahead of the meeting scheduled to take place Tuesday between Kahol-Lavan representatives and heads of the Joint List, MK Mansour Abbas was interviewed bu Radio A-Shams. Last night he told Maariv: "This is a positive, important step in the right direction.” (Maariv)
Arab party's Balad faction considers backing Gantz for PM - Balad, which represents the Palestinian nationalist wing of the Joint List, did not recommend Gantz after the previous round. Meanwhile, Labor-Gesher-Meretz's Orli Levi-Abekasis says won't support gov't backed by Joint List. (Haaretz+)
At the request of MK Ahmed Tibi: A complaint was lodged against a military academy - yeshiva whose students beat an image of him - A video was posted showing students at a yeshiva in Sderot beating a puppet in the shape of the Knesset member from the Joint List. Tuesday, Tibi complained to the Knesset officer who forwarded the complaint to the police. (Maariv)
*Israeli President There are no 'semi-citizens' in Israel, says Rivlin in post-election rebuke - Revives plan for joint Netanyahu-Gantz government. Receiving final results of March 2 vote, president levels criticism at party leaders over divisive campaign rhetoric that singled out Arab sector; says his former unity government outline still valid. (Haaretz+ and Ynet)
Shin Bet security service to take over Gantz protection amid violent threats - Committee must approve decision to place Netanyahu's election rival, facing social media calls for violence against him, under Shin Bet protection. (Haaretz+)

Features:
'Today We Must Dress in the Colors of the Palestinian Flag'
My daughter’s kindergarten in Ramallah is making a video about the children's nationalities. It’s a complicated topic in our family. Her father and I aren't even allowed to drive the same car ■ Post #8. (Umm Forat, Haaretz+)

Other Commentary/Analysis:
Israel’s Latest Highway to Apartheid (Wednesday Haaretz Editorial) While the public’s attention is focused on the coronavirus and the endless attempts to form a government, “life itself” continues as usual: Israel has started planning a new road in the West Bank that Defense Minister Naftali Bennett has already nicknamed “the sovereignty road.” This is a separate road for Palestinians, and it will let Israel build a settlement in the E1 region. E1 is an area of 12 square kilometers (4.6 square miles) that has been appended to the municipality of Ma’aleh Adumim. Plans to build in this area have been frozen for years because construction there would sever the West Bank in two – a step with dramatic political and diplomatic ramifications.
An outbreak of the Corona in Gaza could turn it into a zone (Tal Lev-Ram, Maariv) Gaza reports that the epidemic has not yet erupted and there are no diagnosed patients. Should such a scenario materialize, overcrowding, poor living conditions, and poor medical standards can lead to rapid and deadly spread.
Coronavirus in Gaza: A Death Sentence for Caged Palestinians (Shannon Maree Torrens, Haaretz+) Even a small outbreak among Gaza's densely-packed, blockaded population would put an impossible strain on a healthcare system already teetering on the verge of collapse.
Why is the Gaza Strip calm these days? Hamas knows the answer (Daniel Siryoti, Israel Hayom) "Netanyahu and Gantz are the same thing for Hamas. We have no ties to the Joint Arab List, and a new government would push us back," Hamas official tells Israel Hayom, dismissing the claim that the recent election has had a restraining effect.
Biden is a proven friend of Israel - his policy will not be expressed by breaking the rules (Zalman Shoval, Maariv) After they were swept into revolutionary ideological directions, most members of the Democratic Party return to reality and believe that only by returning to the sources is there a chance to defeat incumbent President Trump…Binyamin Netanyahu, as an effective and sober statesman, knows that Israel must not miss diplomatic opportunities that may not return and that the Trump administration is now an opportunity to advance Israeli political and security interests in an unprecedented way. But that will not prevent him from acting in the same way even if in January 2021, President Biden is in the White House. Biden is a friend of Israel with receipts, and also of Netanyahu. Even if his policy is not an exact transcript of the current US policy, it will not manifest itself in a general breaking of the situation (meanwhile, official Israeli spokesmen should be prevented from expressing themselves publicly for one or another party or candidate). Another condition that matters, not only in terms of current political relevance but in terms of the future of Jews in general: Israeli leaders and US Jewry, which is one of the pillars of the Democratic Party, will act wisely and responsibly to put Jewish unity above all other considerations in the various political system in their countries.