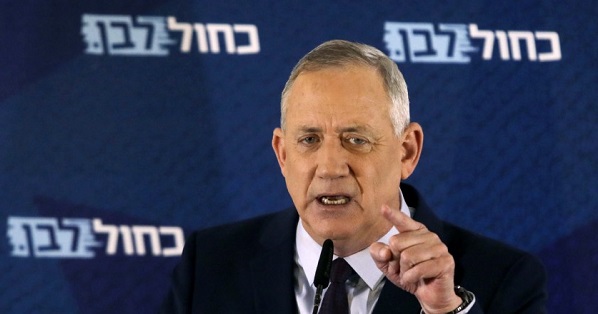 Quote of the day:
"Nothing brings people together in solidarity like a natural disaster, even when that disaster requires more social distancing than gathering together. Let the new plague be our shared enemy."
--Middle East experts, Seraj Assi and Zachary Foster, write in a beautiful essay about how Jews and Arabs united to fight a locust plague in Palestine in 1915.*
Front Page:
Haaretz
Yedioth Ahronoth
Maariv This Week (Hebrew links only)
Israel Hayom

Top News Summary:
The Israeli Health Ministry was pushing for a general closure on all citizens, so that everyone stays in their homes, as well as the declaration of a national state of emergency, but the government and the Ministry of Finance pushed back, fearing for the hundreds of thousands who will be fired.

In the midst of the health and potential economic crisis, Kahol-Lavan leader Benny Gantz was expected to receive the mandate today from President Reuven Rivlin to form a government (update: he did) after Gantz received a majority of 61 recommendations from among the 120 Knesset members, including all the members of the Joint List, the predominantly Arab party. But Joint List leader Ayman Odeh warned that his party would not support a unity government between Kahol-Lavan and Likud. "If Gantz enters a national unity government we will be the main opponents," he said. (The Movement for Quality Government placed a full-page ad in Haaretz that read: “Honorable President Rivlin, don’t be the first President to give an indicted man the mandate.”) After the swearing-in of the Knesset members today, Gantz’s party planned to raise a vote to replace the Likudnik Speaker of Knesset Yuli Edelstein, but Edelstein Sunday said he would prevent Kahol-Lavan from convening the Knesset to vote. Kahol-Lavan wants to replace Edelstein so that it can pass laws to prevent Israeli Prime Minister Binyamin Netanyahu from ever becoming prime minister again. One law would prevent an indicted person from serving as the premier. Another would limit a prime minister to two terms and a third would make direct elections for a prime minister - and not just for a party.

Meanwhile, between Saturday night and Sunday morning, Justice Minister and Netanyahu loyalist Amir Ohana closed all courts due to corona, postponing Netanyahu’s trial from this Tuesday until May. Gantz and other opponents of Netanyahu accused Netanyahu of using the coronavirus to avoid going to trial, putting a shadow over Likud's efforts to form a unity government.

Other Commentary/Analysis:
An emergency for Israeli democracy: Coronavirus crisis cannot chip away at checks and balances (Noa Landau, Haaretz+) The epidemic comes at a time when caretaker prime minister Netanyahu, who is indicted for corruption and fighting for his political and personal future, has too much authority and too much at stake.
*Coronavirus Lesson: How Jews and Arabs United to Fight a Plague in Palestine Once Before (Seraj Assi and Zachary Foster, Haaretz+) A century before coronavirus, tens of thousands of Arabs and Jews died in Palestine’s worst 20th century plague before they recognized the catastrophe as their shared enemy – and cooperated to defeat it
The Corona crisis is also an opportunity to restore our relations with the Palestinians (Gen. (res.) Michael Milstein, Maariv) The global challenge the world is facing as one body embodies possibilities for re-establishing relationships. Assistance provided by Israel to Palestinians may ease tension with the Palestinian Authority and put pressure on Hamas to maintain the quiet. There was no more problematic timing for the appearance of the Corona - in the Israeli-Palestinian context - than now. The outbreak of the epidemic occurs when relations between Israel and the Palestinian Authority (PA) are in deep crisis in the face of the “Deal of the Century,” and in the Gaza Strip the fragile calm depends on braking. However, as time goes by, the common threat may also present opportunities. The Corona epidemic demonstrates, first and foremost, the close link between Israel and the West Bank and the Gaza Strip on the economic-civilian level. The Palestinians depend on Israel in aspects of employment, movement and assistance, while the Palestinian workforce is very vital to Israel. Therefore, both sides develop deep anxiety about the closure of hermetic borders, which could have strategic implications. In Judea and Samaria (West Bank), the PA is said to have succeeded in controlling the spread of Corona, but at the same time, the government and the Palestinian public are concerned about the widespread and prolonged prevention of 120,000 workers going to work in Israel and the settlements - which will undermine the fabric of civilian life, which is the true basis for the relative quiet in Judea and Samaria. This understanding is rooted in the depths of Israel's thinking, which has so far avoided widespread restrictions on civil-economic relations with the West Bank. The situation in the Gaza Strip is more complex. So far, Corona carriers have not been discovered in the area, but the level of anxiety in the Gaza public is high, mainly because it is clear that the Hamas administration does not have the means to treat the disease if and when it breaks out in the area. The lessons of the past have already taught that there is a Gordian connection between civilian and security realities in the region, and this time, too, that civil adversity, not to mention a protest against Hamas, will be channeled to friction with Israel. However, the Corona challenge may also present a number of opportunities. First, targeting all parties on the issue may help reduce the risk of violent friction in the near future, especially in Gaza. The assistance Israel provides to the Palestinians in regards to Corona may help to ease some tension with the PA. And with the Gaza Strip it could be a lever for extracting concessions from Hamas, for example, with regards to preserving security calm, and perhaps even in the field of the prisoners' and missing people (held by Hamas) -  a point that Israel should raise in regards to future Hamas requests for assistance). Israel should prepare to increase its civilian support in the Palestinian arena for the sake of preserving security stability, but this will be more difficult than in the past, given the severe economic challenge Israel is facing today.
Israel's Leading Rabbi Thinks Not Studying Torah Is More Dangerous Than Coronavirus (Anshel Pfeffer, Haaretz+) In the U.S., the ultra-Orthodox accept the state powers and play by the rules – but in Israel, they're so focused on maintaining their autonomy that they don’t care if they turn into a public health threat over the coronavirus.
Coronavirus 'Truce': The Guns Falling Silent Across the Middle East (Yossi Melman, Haaretz+) A sudden quiet reverberates around one of the most troubled, violent regions on earth. Israel’s military is mirroring the enforced restraint shown by Iran, Hezbollah and Hamas - for now.
Israel needs war-time leadership to fight coronavirus (Sarit Rosenblum, Yedioth/Ynet) To win this war, we must enlist all the experience gained from decades of battling terror and ensure all government agencies work in harmony and are coordinating their response.
Not Even Wars or Terror Attacks Prepared Israelis for the Coronavirus Crackdown (Allison Kaplan Sommer, Haaretz+) Israel woke up to a new reality on Sunday – one this most communal of cultures has never had to face before: being home alone.

Interviews:
A Life-and-death Matter': How Israel Helped Singapore When It Needed It Most
Singapore and Israel share 'a certain kindred spirit,' says former foreign minister George Yeo in an interview to Haaretz – both small nations having to survive under difficult odds and surrounded by Muslim-majority countries. (Interviewed by Shaina Oppenheimer in Haaretz+)