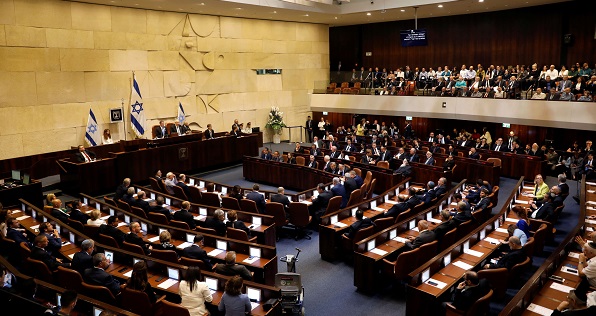 Quote of the day:
"The corona will disappear in the end. But democracy never goes back to zero: what is going wrong these days, under the auspices of corona, will not be easily corrected. Corona must therefore be dealt with, as if there weren’t a terrorist attack against democracy in front of our eyes, and we must fight for democracy as if there were no corona."
--Yedioth's top political commentator, Nahum Barnea writes in an Op-Ed today, after the government employed numerous anti-democratic  means to fight the corona virus.**

Top News Summary:
As the corona crisis becomes more severe in Israel (as of Thursday night, the number of sick has jumped to 677), so do the measures taken against citizens to prevent its spread, sparking apprehension that Israel’s democracy is being eroded - and for reasons not necessarily related to the illness (See the numerous Commentary/Analysis below.)

UPDATE: On Thursday night, Netanyahu announced that the country was going into an Emergency State of lockdown. Some reports said the move will initially last for 7 days and another report said it will last until after Passover, in one month.  This will be the first enforced lockdown since the early days of the state, Reuters reported. [And that may only have been the Arab-Israelis who were under lockdown then. - OH] People will need to stay at home for the next month and may only leave to buy food and medicine, for short exercise or to go pray. Those that work in essential jobs may travel to them.

Israel began the digital surveillance of people infected with corona and those who were exposed to them and sent text messages to some 400 people informing them that they had been exposed and telling them to go into quarantine and police patrolled to uphold the ban on public gatherings of over 10 people and the make certain infected people stayed in quarantine. The Knesset legal advisor called the cellular phone tracking an ‘infringement of democracy.' Moreover, Israeli Prime Minister Binyamin Netanyahu wanted to require polygraphs for Health Ministry staff, but Attorney General Avichai Mendelblit said no. Netanyahu was reportedly concerned about the possible consequences of the Shin Bet monitoring citizens and asked to guarantee that the information wouldn’t leak out. But some of it was revealed at the debate in the Knesset Intel Committee over the plans to restrict citizens’ personal rights through a total lockdown and personal monitoring. Hundreds of people in cars drove to Jerusalem and waved black flags and eight were detained as they protested the 'assault on democracy.' Israeli civil rights organizations and the Joint List party petitioned the High Court to stop the mass surveillance. UPDATE: The High Court ruled that Shin Bet surveillance of citizens infected with coronavirus will be frozen on Tuesday if there is no Knesset oversight by that time. Another concern about Israel’s democracy arose after the Knesset Speaker Yuli Edelstein, of the Likud party, adjourned the parliament, preventing for the second day the formation of Knesset Regulatory committee, which also hampers the Knesset oversight over how the government is handling the corona virus crisis. In Kahol-Lavan they slammed the Speaker accusing him of “trampling on democracy.” (Maariv) Edelstein said the plenum will convene on Monday. (Maariv) Meanwhile, President Reuven Rivlin called on Kahol-Lavan leader Benny Gantz and Netanyahu to return to the negotiating table. (Maariv)

Other Commentary/Analysis:
Coronavirus in the West Bank: We Palestinians Have Plenty of Experience Surviving Curfews and Lockdowns (George Zeidan, Haaretz+)  It turns out there are ironic 'benefits' in being so easily blockaded by our neighbors. And another surprise: an unlikely outbreak of pride in the Palestinian Authority's commitment and competence.
Israel is in all-out war with the coronavirus (Giora Eiland, Yedioth/Ynet) The government is busy patting itself on the back on the way the crisis is being handled, but there are quite a few changes that need to be made if we are to come out of it relatively unscathed.
Palestinians Would Die for the Israeli Kind of Lockdown (Gideon Levy, Haaretz+) Even the terms have been borrowed from the occupation: Israel is on its way to a lockdown, the army is taking over hotels, the Shin Bet security service is taking over our cellphones, and the Border Police and its checkpoints are right around the corner. It’s no coincidence that Haaretz’s military analyst has been recruited to serve as the coronavirus analyst. In a day or two Tel Aviv will resemble Jenin and Israel will be like the Gaza Strip. What is routine there has become a frightening dystopia here.
The Plague Is a Formative Event. When It Fades, New Possibilities Will Emerge (David Grossman, Haaretz+) When the coronavirus pandemic ends, some won't wish to return to their former lives, David Grossman writes.
As Coronavirus Ravages Iran, the Ayatollah Turns to the World for Help (Zvi Bar'el, Haaretz+) Coronavirus crisis: Iran is asking the IMF for a loan to help combat the virus - the first request for help since the Shah was in power.

Interviews:
The Expert Who Says Israel Is Overreacting to Coronavirus
Prof. Michael Levitt's theory that Israel is not risking much with coronavirus made him an instant star among worried citizens. (Interviewed by Amos Harel in Haaretz+)