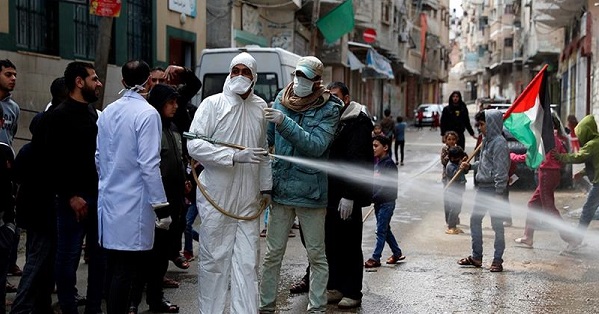 Quote of the day:
"The main problem with this sudden epidemic is that there is no one to hate, no one to take revenge on, and no obvious enemy to destroy."
--Israeli poet, Yehonatan Geffen, in an Op-Ed in Yedioth.*
You Must Be Kidding:
Some Israeli backpackers returning from Peru to Israel rioted at the airport when told they must sign a Health Ministry form committing to self-quarantine.**
Front Page:
Haaretz
Yedioth Ahronoth
Maariv This Week (Hebrew links only)
Israel Hayom

Top News Summary:
Israeli Health Ministry officials’ predictions of 20,000 dead and a corona climax coming next winter with thousands on respirators, while the number of infected already passed 1,200 and the number of unemployed passed half a million (an all-time record in a country nearing nine million people). The Israeli army offered to manage the crisis, saying it is the only entity in Israel capable of handling an event so "dangerous and complicated,” but Haaretz+ reported that Israeli Prime Minister Binyamin Netanyahu is controlling it all and sidelining key health ministry professionals. Causing Israel added concern was that Gaza reported its two first corona cases and Israeli doctors called on Israel to help Gaza, warning of the possibility of the collapse of the densely populated Strip, with only 70 intensive care beds and a lack of respirators in a population of over two million. Prof. Eyal Zisser writes in ‘Israel Hayom’ that Israel is responsible for the consequences of the spread of corona in Gaza. (More corona-related news in ‘Corona Quickees’ below.)

The other top story was the big event at the Knesset expected Monday, when the Knesset reconvened, after Knesset Speaker Yuli Edelstein (Likud) adjourned it last week, saying it was due to corona virus health restrictions, preventing a vote from being held to replace him as Speaker and from approving the establishment of Knesset committee - most importantly an Arrangements Committee, which will in turn quickly set up an interim Finance Committee and Foreign Affairs and Defense Committee. The High Court ruled last week that, if by Tuesday afternoon there is no subcommittee on secret services set up, the emergency regulations imposed by Netanyahu, which instruct the Shin Bet to collect digital information on corona-infected people and those who were in proximity to them and to forward it to the Health Ministry, will expire. Sunday, at the opening of a High Court hearing of petitions to force Edelstein to hold a vote to replace him, the Knesset legal adviser said choosing a new Speaker now was problematic. Normally, new speakers are chosen after a government is formed. Attorney General Avichai Mendelblit wrote “the establishment of committees should not be delayed” and that the Knesset should continue working as usual during the Corona crisis. The High Court said that the health officials' steps to combat corona don't justify the suspension of Knesset activities. Interestingly, former justice minister and a member of Netanyahu's right-wing bloc, Ayelet Shaked (Yamina party), said the Knesset operate despite the corona.

Features:
A fascinating documentation: A journey among the voters of the Joint List after the huge achievement in the elections
In the recent elections, the Arab sector came together to vote for the Joint List. At the height of the corona panic, residents of the Triangle explain what the party's secret power is, what Netanyahu's part is, and what MK Hiba Yazbak’s status is. (Eyal Levy, Maariv)
Gaza, like you never knew it
For modern-day Israelis, Gaza is synonymous with terrorism and alienation. But Gaza has a long history of a thriving Jewish presence, explains researcher Haggai Hoberman. (Nadav Shragai, Israel Hayom)

Interviews:
“We will increase the ability to perform tests immediately"
The Ministry of Health has already prepared a thousand beds for Corona patients, 500 more for the respiratory tract, and they don’t see the end. Last night, Health Minister Moshe Bar-Siman-Tov (MBST) said in a special interview with him on Twitter that only about 500 beds with respirators are available at the hospital right now. MBST explains that the epidemic climax - where thousands of Israelis may need respirators - may only arrive next winter. However, he looks toward Passover with hope and keeps his fingers crossed that after the holiday the situation will change: "I'm assuming that at the climax, there will be thousands of patients who need respirators...I hope the quarantine will conquer the rate of infection, and we will begin to gradually and in a managed way release sector after sector.” (Interviewed by Nadav Eyal in Yedioth Hebrew)
What is the latest scenario - not the horror scenario, but the likely one - by which the health care system is operating? How many patients, and what distribution of the severe cases?
MBST: ”We have many reference scenarios that are constantly being updated. The key question is what will be the number of patients who will need ventilation at the climax. In the end, we will know how to deal with the number of patients. The patients who need ventilation assistance are the challenge. I'm assuming that at the climax, thousands of patients will need respirators.”
A document you issued to hospital and HMO directors on the 19th of the month includes their preparation plan. A total of 664 beds with respirators, aside from intensive care. If the likely scenario is thousands needing respirators, where will there be more beds?
MBST: "We are preparing a lot of beds. Also in general hospitals, geriatric centers and hotels, too, according to the patient's level of acuteness. In addition, we are purchasing more and more respiratory devices.”
On the subject of tests. I talked to a frustrated health care doctor. He has suspected cases, but is told that if the case has no connection with an isolated or ill person and he has not returned from abroad, there is no permission to do a test.
MBST: "We're trying to let go there, too. You understand that there is no possibility to give everyone tests. We've set ourselves a goal of reaching 5,000 and then 10,000, per day. The process will already include more freedom for doctors in hospitals and outpatient clinics. Besides, I think it's important to understand that tests don’t rescue people from quarantine."
Professor Sigal Sadecki, head of public health at the Ministry of Health, explains that it is a matter of access. It is inefficient, in her view. Why shouldn't Israel aspire to extensive testing as much as possible? How do you conquer the epidemic without tests to find the patients?
MBST: "We strive to do more, but realize that the contribution of this will be limited to getting out of isolation. We are also planning to start serological testing (antibody testing) soon with the wave of limitations they have at this time."
The matter is not about leaving quarantine. Quarantined people still infect their household, and also at work, and at the supermarket. If they have symptoms, why wait for them to infect and not do 30,000 tests a day?
MBST: “Speak specifically about who you think we want us to check."
1. Any medical team that shows symptoms at all, even if not exposed to an infected person or to someone in quarantine. 2. Every sick person at an outpatient clinic whom a doctor thinks needs a test 3. A faster test for home quarantined with speedy results, so they can update their chain of people they infected and put them in isolation.
MBST: “I agree about a medical team member with symptoms. This is the plan now. We will release more tests to the community doctors but you realize it can reach tens if not hundreds of thousands a day. For home quarantined - every test done correctly is correct the time of the test. I am very worried it will cause them to go out of isolation before their time is up.“
Prepared for APN by Orly Halpern, independent freelance journalist based in Jerusalem.
comments powered by Disqus