Washington Jewish Week: "Israelis and Palestinians can save each other’s lives. Certainly they can solve the conflict" by APN's Jim Klutznick and Aviva Meyer 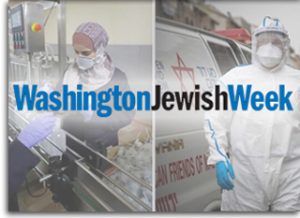 As global crises typically do, the coronavirus — its spread, and the looming threat it poses to humankind — provides us with a sense of perspective.

COVID-19 does not discriminate between Israelis and Palestinians. When threatened by this deadly virus, the two peoples worry together and work together to save lives.

Pictured Left: In Hebron, Palestinian women work in a factory amid precautions against the coronavirus (photo credit: REUTERS/MUSSA QAWASMA); Right: In Jerusalem, an Israeli medic arrives to test a patient with symptoms of COVID-19 (Yonatan Sindel/Flash90)

When Israel was hit by a monstrous fire, Palestinian firefighters crossed the Green Line with their firetrucks and risked their lives to save Israelis. And when Palestinians are hit by COVID-19, Israel’s public health professionals work side by side with their Palestinian colleagues, supplying them with test kits, medicine and knowhow. Israel’s President Reuven (Ruvi) Rivlin called Palestinian President Mahmoud Abbas to bolster the cooperation. And officials on both sides are taking measures to prevent a collapse in the fields of public health, security, and the economy.

In such times, you cannot but wonder why Israelis and Palestinians do not harness their shared humanity, their common sense and their sense of common future to end the bloody conflict between them. Unlike pandemics, wildfires and earthquakes, the Israeli-Palestinian conflict is manmade. And this manmade calamity can be undone by humans — if they find it within themselves to relate to the other as humans, as equals, as equally human.

We know as well as anyone how complicated the conflict is. We’ve been documenting it and advocating ways to address and resolve its components for many years. We know how difficult it is to untangle the knots of problems like Jerusalem sovereignty, Palestinian refugees, security arrangements and Israeli settlements in the West Bank. We know that this is not a “senseless” conflict, as some often depict it. It is a conflict between two national movements that claim the same piece of land. We know that in some ways, this is a zero-sum conflict.

But we also know that in recent years, it was mainly attitudinal problems – attitudes among the Israeli and Palestinian publics and leaders (and now the White House as well) — which obstructed progress toward conflict resolution. And we know that despite the zero-sum nature of the conflict, there is a win-win compromise solution for it, waiting to be adopted and implemented.

The COVID-19 pandemic will eventually abate and eventually fade away. We don’t know when and we don’t know how many of us, here in America and in the Middle East, it will impact.

We also know that once coronavirus is contained and defeated, the Israelis and Palestinians that we so deeply care about will be left with a malignant conflict that has been plaguing their societies for almost a century.

There is a viable solution to this conflict, and we hope that the trauma we are currently experiencing will make this solution easier to comprehend, grasp and achieve.

In the Middle East — perhaps more than anywhere else in the world — common enemies spawn alliances. COVID-19, a tiny, invisible virus, which you can’t fight with knives, firebombs, artillery or fighter planes, is such a common enemy. It is hitting hard on both sides of the Green Line and unfortunately will hit even harder.

Israelis and Palestinians fighting the virus will not resolve the conflict. Their fight against this epidemic, on both sides of the Green Line, will not serve as the foundation for a two-state solution. Israelis and Palestinian societies are both collectively traumatized, each haunted by a calamity that is at the core of its founding narrative. The sense of victimhood and fear on each side has generated mutual fear, mistrust and dehumanization.

The shared trauma that Israelis and Palestinians are now experiencing provides a rare opportunity for both societies to explore the empathy, understanding, compassion and forgiveness that are necessary to turn away from their trauma-dominated national narratives. It is an opportunity for both to recognize the need to stop this endless conflict by accepting the necessity of national sovereignty for both peoples.

COVID-19 knows no borders - it does not discriminate between Israelis and Palestinians
Our shared humanity in a time of crisis
APN Stands with Israeli Public; Alarmed at Breaches of Democratic Norms and Institutions
APN COVID Report #2 - The effect of defunding the World Health Organization on Israel and Palestine
APN COVID Report #1: How accurate is Coronavirus reporting in Israel, the West Bank and Gaza?
APN COVID Report #3: The situation in East Jerusalem
APN COVID Report #9: Upholding human rights in the courts