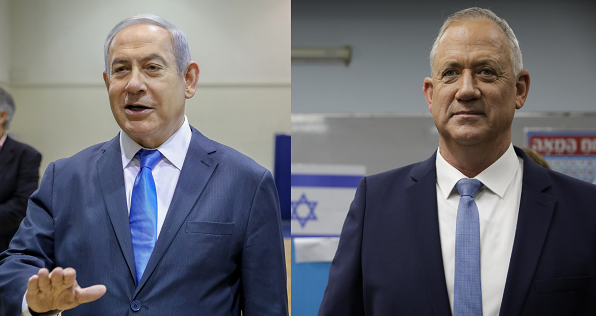 Breaking News:
POLITICAL DRAMA: Kahol-Lavan leader Benny Gantz shocks and offers himself to be Knesset Speaker with right-wing support in order to form a unity government with Binyamin Netanyahu and prevent law from being passed that would prevent anyone with an indictment from forming a government - i.e. Netanyahu. Kahol-Lavan faction unravels as partners break-off. (See Elections 2020 / Netanyahu Indictment News below.**)
Front Page:
Haaretz
Yedioth Ahronoth
Maariv This Week (Hebrew links only)
Israel Hayom

Top News Summary:
New harsher restrictions on movement in Israel, more corona victims, and an unprecedented situation where the Knesset Speaker resigned after saying he refused to obey the High Court made top news in today’s Hebrew newspapers. [But then in an another shocking move hours ago - Gantz moved towards joining a unity government, causing Kahol-Lavan to break apart.]

**Elections 2020 / Netanyahu Indictment News:
Knesset Speaker Yuli Edelstein - now outgoing - resigned from his post Wednesday after refusing to obey the High Court’s ruling to hold a vote in the Knesset by Wednesday for a new Speaker at the request of the Kahol-Lavan-led majority, shocking the political and judicial establishment. In a speech to the nation Wednesday night, President Reuven Rivlin said it was ‘unthinkable’ that anyone would defy the court, echoing the statements of many former justices, including Dorit Beinisch and Elyakim Rubinstein. (Maariv, Maariv and Ynet Hebrew) Edelstein gave ‘Israel Hayom’ an exclusive and interesting interview in which he laid out his reasons and gave his defense. (Just before Edelstein’s resignation announcement, nearly 1,000 protesters drove in a convoy of cars to Jerusalem again and demanded Edelstein hold the election of a new Knesset speaker. They waved black flags and Israeli flags.)

Rivlin said that now Edelstein was gone, the court order would be implemented and “Israeli democracy will emerge strengthened and more resilient from these testing times.” However, Edelstein said that his resignation would not go into effect for another 48 hours, so a vote for a new speaker would have to wait till next week.

1st UPDATE: Last night, the High Court justices convened a hearing with top government legal officials to seek a way out of the constitutional crisis. Late last night they ruled that the Knesset could appoint an interim Knesset Speaker today to elect a replacement Speaker. That interim speaker would be the most veteran MK, chairman of the Labor Party, Amir Peretz. High Court Chief Justice Esther Hayut attacked Edelstein, saying in her middle-of-the-night ruling that Edelstein had committed "an unprecedented violation of the rule of law" that could lead to civilians not obeying government orders regarding the coronavirus. "If this is how a person of authority behaves, why should the citizen behave otherwise?" [The crazier part comes later...-OH]

In his address, Rivlin also called for an emergency unity government and afterward and it appears, what would later become clear is that this is exactly what Gantz was quietly planning. So while the High Court last night convened with top government legal officials to find a way out of the constitutional crisis and allow for the Knesset plenum to convene to replace the Speaker (after which it would be able to pass the legislation that would prevent Netanyahu from forming a government), Kahol-Lavan leader Benny Gantz was working in the opposite direction: he spoke with Netanyahu last night about forming a temporary unity government and their teams met to negotiate and were supposed to continue negotiations today.

UPDATE #2: At the 11th hour, just before the vote for a new Knesset speaker, a storm erupts in Kahol-Lavan as reports surface that Gantz is interested in joining a unity government with Netanyahu and that he wants to stand for Knesset Speaker. MK Yair Lapid, leader of the Yesh Atid party, which is one of the four components of Kahol-Lavan, threatened to leave the alliance. Until that point, it was agreed internally that MK Meir Cohen, a member of Yesh Atid, would be elected the new Knesset Speaker by the center-left ’61 bloc.’ That would open the path to passing a bill to prevent an indicted person from being prime minister. But then at the last moment, Gantz offered himself to be the candidate to be elected Knesset Speaker. So ironically, after fighting to get Edelstein to convene the plenum so that this law could eventually be passed, now Gantz took Edelsteini's place so he, too, could postpone such a vote and make way for a unity government with Netanyahu. Lapid and Moshe Yaalon, leader of the Telem party, another component of Kahol-Lavan, both vehemently oppose a unity government with Netanyahu and boycotted the vote. Other Knesset members, including Avigdor Lieberman, Ayman Odeh and Ahmed Tibi, were also furious and announced that they will not support the move. (Maariv) Indeed, Yesh Atid and Telem party members, Joint List and Yisrael Beiteinu and Labor-Gesher all were absent from the vote. (Ynet Hebrew) But, irony of ironies, Likud and other right-wing legislators voted in support of Gantz. Afterward, in his first speech as Knesset speaker, Gantz argued for an "emergency national unity government" to allow Israel to recover from the coronavirus outbreak. "These are not normal times," he told lawmakers, "and they call for unusual decisions." He said he thought this was “the right thing to do at this time.” Others were not convinced. Lapid and Ya'alon filed a request to split Kahol-Lavan. Their two factions (Yesh Atid and Telem) will remain as one 18-member party and will get to keep the name Kahol Lavan because they are larger than Gantz’s 15-member ’Hosen’ party, including MK Gabi Ashkenazi. Lapid later wrote to his people that “Benny has decided to dismantle Kahol-Lavan to crawl into Bibi's government. There is no way to understand that." (Ynet Hebrew) Ynet wrote that “Gantz apparently decided to run for Knesset speaker out of of the fear that if a unity government were finally formed, Lapid and his allies would not join, making Cohen the Knesset speaker from a non-coalition party.” The Hebrew media websites were already naming what ministries the Hosen party would get in the unity government expected to be formed. Gantz would be foreign minister and replacement prime minister, Ashkenazi was expected to become defense minister and the Hosen party would also get the Economics, Justice and Communications Ministries. This unity government will give Netanyahu his fifth term as prime minister. And, the final shocker is that Yuli Edelstein, who was in contempt of the High Court, is expected to get back his job as Knesset speaker. [Making one wonder if Edelstein’s move was not planned with Gantz to begin with….-OH] Earlier this week, there were reports that Gantz was interested in a short-term six-month unity government. It remains unclear if this will be a long-term government or a limited one.

Also noteworthy, on Wednesday, Minister Zeev Elkin blocked holding a video conference during criminal proceedings for defendants not in custody, thereby preventing Netanyahu’s trial from being recorded and shared.

Other Commentary/Analysis:
Israel, the Palestinians, coronavirus and peace (Alan Baker, Israel Hayom) Like water, contagious diseases know no borders. But it is to be hoped that this crisis will enhance mutual trust and confidence between Palestinians and Israelis.
Israel Predicts Up to 40,000 Coronavirus Patients May Die. What if There’s a Way to Avoid This? (Meirav Arlosoroff, Haaretz+) This forecast is predicated on the current situation, after the country has been put in a partial shutdown for a week.
Lies, transparency, and pandemics (Ben Cohen, Israel Hayom) When authoritarian regimes lie to their own people about a worldwide, contagious disease, their lies have an impact on those of us who are otherwise mercifully spared from living under their direct jurisdiction. In these dire circumstances, authoritarian regimes will never move to reassure their citizens. Instead, they willfully increase the climate of fear and distrust, the key to regime survival. As has been the case with its ally China, where the virus first coalesced, and Iran, now the epicenter of the virus in the Middle East, doctors in Venezuela similarly face repressive measures for calling out incompetence, indifference and corruption among government officials, or – again as in China and Iran – for even being transparent about the number of coronavirus cases they have encountered. "It's better to say you don't have any cases of corona, even if you have your suspicions," Dr. Jose Manuel Olivares, an oncologist and opposition congressman who fled Venezuela last year, told The Wall Street Journal. "Call it a cold, another flu, or H1N1, anything but corona."
As the Coronavirus Spreads in Tel Aviv, Homeless Women Are Treated Like Lepers (Vered Lee, Haaretz+) In February I met a homeless woman, addicted to drugs, who is a 42-year-old mother who had worked as a prostitute for years. Now she collects bottles and sleeps in the street with other homeless people in the old central bus station compound in Tel Aviv. The incitement towards homeless has gotten more intense since the coronavirus outbreak. The marked lack of humanity these days toward the most vulnerable population in society is outrageous, especially since organizations are continuing to help these people in these times. The fine line between raising awareness of the difficult situation in south Tel Aviv and dealing with social problems is being crossed these days, and has become a shameful campaign of dehumanization. These are desperate women, most of whom can function but have no network of assistance and distrust the state authorities that have abandoned them. These are mothers and even grandmothers, some of whom live a double life: They sleep in these places and engage in prostitution for a few days, then go back to their families. The closures, although celebrated by the neighborhood activists, could lead these women to turn tricks on the street, that’s how desperate they are.
Prepared for APN by Orly Halpern, independent freelance journalist based in Jerusalem.
comments powered by Disqus