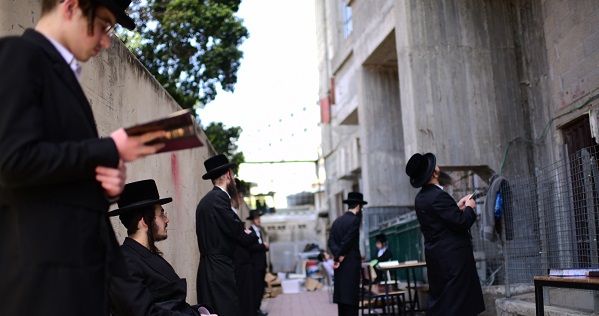 You Must Be Kidding:
“For lack of choice."
--Reasoning for Israel National Security Council decision to provide asylum seekers from Sudan and Eritrea with the same treatment for the coronavirus as Israelis, even though they aren't citizens and don't have health insurance.**

Breaking News:
Following Gantz, Labor Chairman to Join Netanyahu-led Unity Government
Amir Peretz and another lawmaker set to meet with Kahol Lavan and decide on allocation of portfolios, as a third lawmaker opts out of government. (Haaretz+)


Elections 2020 / Netanyahu Indictment News:
Ultra-Orthodox Jews hit by a high rate of corona infections as Israel heads for an even tighter lockdown (see more in Corona Quickees below) and Israeli Prime Minister and Likud Chairman Binyamin Netanyahu meets with Benny Gantz, leader of a slimmer Kahol-Lavan faction to hammer out the details of a unity government agreement - which will include a clause to pass a law to allow Netanyahu to serve in government even after the rotation of leaders - making the top stories of today’s Hebrew newspapers.

After Gantz’s shocking decision Thursday to be elected Speaker of Knesset with the help of the right-wing bloc and to advance a unity government, moves which erupted in the explosion of Kahol-Lavan into its original parts, the latest reports are that Gantz, who stood behind the legislative initiative to prevent a man indicted of a criminal act from forming a government, will now advance a bill to allow a man indicted of a criminal act to stay in government, while a trial is conducted against him. According to Israeli law, MKs and cabinet ministers cannot serve while under indictment. According to Yedioth, Gantz agrees to promote a law to allow Netanyahu wants to pass a bill that would allow him to continue to serve in government after the two rotate and Gantz becomes prime minister. According to Yedioth Hebrew, in his post-rotational role Netanyahu wants to have the right to veto government decisions and senior public service appointments.

Gantz and Netanyahu began a meeting late Saturday night to finalize the unity government agreement. Gantz will be acting prime minister in a rotation government and Ashkenazi will be defense minister. The Likud opposes Kahol-Lavan pick MK Avi Nissenkorn from being Justice Minister and Gantz reportedly opposes Likud MK Yuli Edelstein from getting back his job as Knesset Speaker after he acted in contempt of court last week. Another problem from Gantz's viewpoint is that Netanyahu is planning on appointing no less than 30 ministers, an enormous government, which is a great cost at a time of the deepest economic crisis Israel has known. (Yedioth Hebrew)

There were some reports that Netanyahu will not give Gantz everything that was originally discussed. Maariv’s Anna Barsky reported that some believe that Netanyahu intends to withdraw from the talks with Gantz, and then close a deal with Labor party chairman Amir Peretz and Labor MK Itsik Shmuli. Contacts between Likud and Labor have not stopped in recent days. The third MK from the Labor Party, Meirav Michaeli, stated that she would not sit in the Netanyahu government.

Kahol-Lavan is a faction made up of four parts: Gantz’s party is called Hosen L’Yisrael (Israel Resilience), Yair Lapid’s party is called Yesh Atid and Moshe Yaalon’s party is called Telem. Gabi Ashkenazi did not lead a party and he went with Gantz toward a unity government. Yair Lapid and Yaalon are going to the opposition. Today a Knesset Panel okayed the break up of Kahol-Lavan (Blue and White). Gantz got to keep the name of ‘Kahol-Lavan.’

There was a lot of criticism from Gantz’s former partners. Lapid accused Gantz of stealing votes and giving them to Netanyahu. In a letter to Hosen MKs, Yesh Atid MK Ram Ben Barak wrote: "You feel nauseous to enter Netanyahu's government, it’s not too late (to regret).” Ben-Barak urged them not to join the "racist and radical government" and stated: "Your good name will be forever stained, Gantz and Ashkenazi favored surrender over long battle and they waved a white flag.” (Maariv) One member of Hosen, MK Ghadir Kamal Marih, publicly expressed anger, saying “A leader does not betray his principles.” She also said she would not sit under “the corrupt man from Balfour” in  a reference to Netanyahu. (Maariv) Join List members also condemned Gant’s move, saying he stole voters’ mandates and that he “lacks political backbone.” (Maariv) Gantz supporters also expressed their anger. But Gantz shot back at his former partners saying, “They preferred a fourth election rather than compromise.” Gantz said leaders must take responsibility and join in the fight against the coronavirus and for the future of Israel's economy. Gantz said his door remains open for his former partners to join as well. Organizers of the ‘Black flag’ protest for democracy said that police forbade them from demonstrating in front of Gantz's house, although they were allowed to protest outside the homes of various other MKs from the Hosen party. (Maariv) There was a leader who expressed his happiness with the unity government: US President Donald Trump called Netanyahu on Friday to congratulate him.

Other Commentary/Analysis:
Coronavirus Will Make Israel Pay for Neglecting Its Minorities (Noa Landau, Haaretz+) Israel’s policy of no-man’s lands is not new. The coronavirus crisis is only another example of the way this policy might blow up in all of our faces at any time now. From the ultra-Orthodox, to the Arab community, hilltop outposts in the territories to communities of asylum seekers in Tel Aviv – Israel has abandoned entire groups until it is too late. Health, welfare and law enforcement authorities are almost non-existent until suddenly, intervention is needed and the only response that remains is always to use violence. That’s the way it is with the hilltop youth going wild in the outposts; it’s the way things are with crime in the Arab community and the same goes for the ultra-Orthodox community. Israel’s faulty treatment of its ultra-Orthodox population has already emerged as one of its most serious failures in dealing with the coronavirus crisis.
Coronavirus in Gaza is both a threat and an opportunity for Israel (Alex Fishman, Yedioth/Ynet) Although the northern border appears to pose no threat right now, in the Hamas-controlled enclave a massive COVID-19 outbreak might result in another cross-border flare-up, as the militants who rule the Strip grow wrathful at the lack of medical assistance
The Danger of an Economic Collapse in Israel (Haaretz Editorial) The price of full quarantine is enormous. The GDP would plunge by 9 percent if it continued for five weeks, and by 18 percent if it persisted for 12 weeks. It would mean economic damage of 140–250 billion shekels ($39.3–70.1 billion), hundreds of thousands of people losing their jobs and joining the ranks of the poor, and a real danger to Israel’s economic stability. Israel’s financial collapse would be a disaster, whose cost in terms of human life would be no less severe than the price the epidemic is now exacting, and an even greater cost in terms of quality of life.
Israel is coronavirus light unto Arab nations (Smadar Perry, Yedioth/Ynet) Middle East countries are not looking towards Europe, which is failing to stem the virus, or the U.S., which seems to have missed the boat on efficient measures entirely - they only look to their long-time enemy.
The Shin Bet Will Do Whatever Netanyahu Says (Yossi Klein, Haaretz+) You wouldn’t believe how quickly our Shin Bet could turn into the Stasi. The speed at which this happens is on a par with the speed at which a democracy turns into a dictatorship. Not all at once. More like the way you lick an ice cream cone. Around the edges at first and then you gradually reach the main part.
It's not too late for a coronavirus war cabinet (Yoav Limor, Israel Hayom) Without an organized administrative apparatus to facilitate the best and most informed decisions – unnecessary mistakes will be made. Every commission of inquiry ever established here has reached this conclusion.
Rocket Exchange With Gaza Signals Israel Won't Hesitate to Act Despite Coronavirus Crisis (Yaniv Kubovich, Haaretz+)  Hamas for its part has deployed its forces along the Gaza Strip border and has raised its level of preparedness in the area.
Internalize this: When you don't respect the rules, you lose (Dr. Orit Miller-Kattab, Maariv) From Yuli Edelstein (the Knesset Speaker who disobeyed a High Court ruling) to the young people who were rescued from Peru (and refused to promise to quarantine upon arrival in Israel) to the state that decided to evacuate seniors from a nursing home for the benefit of corona patients: when someone got the right to his chair, you don't push him off of it and aggressively put yourself there instead.
With a Curfew and Unreliable Coronavirus Toll, Egyptians Face a Cruel Ramadan (Zvi Bar’el, Haaretz+) Egyptian editors are warned not to stray from the official line on coronavirus numbers, while rumors run wild on social media. Economic threats loom as tourism dries up.
Israel and the demise of the global village (Caroline B. Glick, Israel Hayom) Israel's ability to protect itself and adapt its economy to the new post-global village reality will in large part determine how it survives and prospers in the post-global village world now taking shape.
As armies reassess risk, coronavirus is making peace in the Middle East (Zvi Bar'el, Haaretz+) The virus could hasten the U.S. withdrawal from Iraq, Afghanistan and Syria, while Turkish-Syrian clashes in Idlib subside. But some refugees have no means to tackle pandemic, not even running water.
Commitment, combat and corona (David M. Weinberg, Israel Hayom) Sending off your son to serve in the Israeli military is a raw test of Zionist commitment, especially during a a time of global pandemic.
Not the High Court’s Place (Israel Harel, Haaretz+) The High Court of Justice’s aid in ousting Knesset Speaker Yuli Edelstein will bring the Netanyahu haters temporary gains, such as a speaker of their choosing, but it won’t bring about the ouster of the one they truly despise. If their real concern were the country’s future, as they profess, particularly at this time of emergency, they would be ready to join a government of national salvation. This is what the situation calls for.