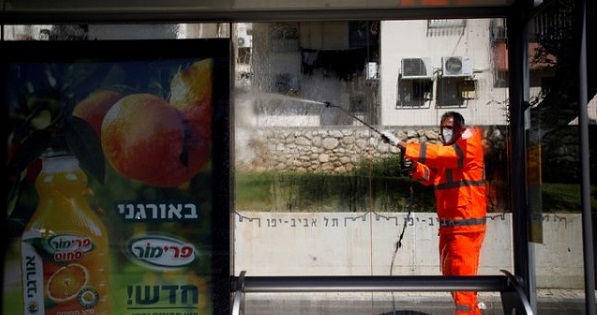 Quote of the day:
"A population that knows no science is not equipped to comprehend the threat of a virus. And a person who has never learned basic math cannot be expected to understand the graphs about flattening the curve."
--In a Haaretz+ Op-Ed, Jessica Apple blames the State of Israel for the high rate of the spread of coronavirus in the ultra-Orthodox community because it has allowed the community to forego basic education in the subjects that are crucial to understanding the threat of COVID-19.*
You Must Be Kidding:
The websites of Israel's Social Security and its National Employment Service have no Arabic form to apply for unemployment benefits.*

Top News Summary:
Front page photos of police enforcing the movement restrictions on ultra-Orthodox men (only in Haaretz the main photo was of police blocking roads in Tel-Aviv), a plan to let young people out of self-quarantine and back to work after Passover, the heartbreaking deaths by coronavirus of two mothers, aged 49 and 50, and the stuck negotiations between Likud and Kahol-Lavan for establishing a unity government were the top stories in today’s Hebrew newspapers.

Elections 2020 / Netanyahu Indictment News:
Three disputes still stand in the way of a new government: Who will be the Knesset Speaker and the Minister of Justice and whether Israel will apply sovereignty over land in the West Bank (Kahol-Lavan and Labor disapprove). Kahol-Lavan insists that “Netanyahu needs to solve problems and disputes he has in the Likud and in the bloc and he is trying to exert pressure (on us) to help him.” (Yedioth Hebrew)

Settler leaders are concerned that the annexation plans that the US President approved may now be thwarted by a unity government and asked for an urgent video call with Prime Minister Binyamin Netanyahu to ascertain that annexation would be part of the government's basic lines. (Yedioth Hebrew)

Likud also reportedly demands that it has veto rights over senior judicial appointments. Maariv’s Ben Caspit reported that the political and legal officials say this is unreasonable in light of the fact that these are the people who will deal with Netanyahu’s criminal cases. Kahol-Lavan told Caspit: ”There will be another Likud minister to deal with this.”

Corona and Quickees:
Alongside shows of police enforcing health guidelines, what also became apparent was how much temporary Defense Minister Naftali Bennett was involving the military in trying to contain the coronavirus crisis. Alongside plans to deploy soldiers with police to enforce health restrictions, Israel’s most renowned military commando unit, Sayeret Matkal, was enlisted to resolve the failure in carrying out effective testing, Haaretz+ reported. According to people involved in the activities, the cooperation between the IDF and the Health Ministry is harmonious and smooth. Bennett is also leading an initiative to employ the infamous Israeli spyware company, NSO, ‘grade’ coronavirus cases, but Justice Ministry officials are not pleased with it, Haaretz+ reported. Bennett urged a quick end to the lockdown, saying Israel may have more suicides than virus deaths due to massive financial distress. The papers also reported on plans to gradually begin releasing some people from their homes and back to their jobs after Passover.
Other Quick Hits:

Elections 2020/Netanyahu Indictment Commentary/Analysis:
Oh, Benny: Gantz is the ultimate tragic-pathetic character (Isaac Ben-Ner, Maariv) How do you lose in a moment your lifetime achievement, Kahol-Lavan. and the confidence of a million shocked voters, join Netanyahu and legitimize his path and his enormous government?
Gantz Broke the Israeli Left's Heart; Labor Leader Stuck a Dagger in It (Chemi Shalev, Haaretz+) Their intention to join forces with Netanyahu has left the so-called Zionist left defeated, deserted, despondent and facing imminent demise.
The Israeli left is melancholy, partly because of the recent "round of betrayals" (Arik Bender, Maariv) In spite of the embarrassing results of the recent election, despite all the alliances, it seems that the alternative camp has not yet realized it has lost its way. The Israeli left, which is in one of its lowest periods, is undergoing melancholy. But there seems to be more than the pain of the election crash and the constant decline in the number of mandates, it is difficult for the left to digest the phenomenon of "betrayal" and the loss of its path. In the past, they used to mock the Israeli left, that it could hold its conferences inside a telephone booth. Today, that reality is no longer a joke.
As Netanyahu and Gantz Prepare for Unity, Social Darwinism Is at the Gates (Sami Peretz, Haaretz+) Worse than the enormous waste of establishing a cabinet with 34 ministers is the fear that this crazy idea signals the greatest danger facing Israel at this time: Social Darwinism. The message being sent by what will apparently be the government coalition headed by Prime Minister Benjamin Netanyahu – in a rotation with Benny Gantz – is that in order to form a stable government you must hand out jobs, while inflating the cabinet to an unprecedented size…The public needs a functioning, efficient and effective government at this moment, and leadership that it can trust. The proliferation of government ministries entails heavy costs of hundreds of millions of shekels a year and even larger indirect and hidden costs – because of the bureaucracy and complications it leads to…A cabinet of 34 ministers testifies to our political leaders being totally cut off from reality and their ignoring the fundamental principles needed to get through this crisis period: Trust, solidarity, responsibility for one another, restraint and serving as an example.
Time for pragmatic Arab politics (Jalal Bana, Israel Hayom) If Arab politicians continue to present overly-rigid demands that cannot possibly be met, they will find it difficult to join even a government formed by Meretz.

Other Commentary/Analysis:
Coronavirus, the Greatest Challenge to ultra-Orthodox Jewish Life Since the Holocaust (Anshel Pfeffer, Haaretz+) Torah no longer saves from death. The coronavirus has dealt an unimaginable blow to the rabbinical authority - and worldview - that ultra-Orthodox Jews previously regarded as infallible and eternal.
The price of ultra-Orthodox disconnect from society (Amihai Attali, Ynet) The average Haredi person is not at fault, it is their custom to remain isolated and only follow their rabbis; it is up to the government to bring the information regarding the virus and its dangers to them.
Israel's ultra-Orthodox Jews Face Coronavirus Devastation. They Need Face Masks (Jessica Apple, Haaretz+) Israel has allowed members of the ultra-Orthodox community to forego basic education in the subjects that are crucial to understanding the threat of COVID-19.  A population that knows no science is not equipped to comprehend the threat of a virus. And a person who has never learned basic math cannot be expected to understand the graphs about flattening the curve.
No, everything won't 'be fine' in Israel (Dan Ben David, https://www.ynetnews.com/article/r1687YlwUYnet) A blasé homily has long defined state policies, leading to a deterioration in the health system and allowing one fifth of the population to remain uneducated - creating a future without the professionals that every modern country needs to thrive.
The Coronavirus Crisis Shows the Disgrace That Is Israel's Health Minister (Zvi Bar'el, Haaretz+) For the next several weeks or perhaps months, the ones managing the country will not be the elected officials, politicians trying to advance social welfare or a national agenda. It will be clerks, experts, advisers, policemen, inspectors, corporations, intelligence agencies and even soldiers who will all be directed toward one mission: eliminating the coronavirus. This mission will leave no room for chatter about democracy, patients’ rights or minority rights. The public’s capitulation is so complete that even a “thin” government or even a sole ruler could fulfill this role. Any order issued by the leadership – any leadership – will be fully obeyed out of fear of COVID-19, fines or arrest, or because no one has any better way to cope with this virus. But even within this blind, obedient suffocation, about which we may later ask whether it was responsible and necessary, one must still decry the unparalleled disgrace of Health Minister Yaakov Litzman. This man, who takes his orders from flesh-and-blood messiahs and believes that this epidemic is another test from God for the children of Israel (and Ishmael) before he sends them the Messiah, is ostensibly responsible for the most important struggle in the history of the state – but in actuality, he’s responsible for nothing. It’s doubtful that he is able to follow the explanations of his own director general.
Sometimes, shaming is a mitzvah (Irwin J. Mansdorf, Israel Hayom) Psychologically, we always choose education over coercion. But those who knowingly, intentionally, take a chance not just with their lives but also with yours and mine, must be called out on it.
The Corona has cut diplomatic ties, but Netanyahu will bring them back (Zalman Shoval, Maariv) Will diplomacy return to normal when the crisis is over? Probably not immediately. Not only because the world will look different, but also because it will be difficult to rebuild the previous relationships and heal the disconnects created.
Coronavirus, occupation, and the Haggadah (Moshe Phillips, Israel Hayom)  J Street's booklet for Passover concentrates on criticism of Israel over the alleged "occupation" rather than the story of the Exodus from Egypt.
Too Big a Brother (Haaretz Editorial) Under the cover of the spreading coronavirus, the government is deepening its invasion of the lives of this country’s citizens. Defense Minister Naftali Bennett continues to use his temporary authority in order to promote plans that run roughshod over the right to privacy, while demolishing the distinction, so vital in a democracy, between the army and civil society.
The voice of the Gulf: In Jerusalem, one must be wary of the forgiving approach on the way to solidarity (Ksenia Svetlova, Maariv) Is the State of Israel gradually trying to get closer to the alliance of moderate Sunni Gulf states, is it developing dependence on Qatar, which gives official sponsorship to the Muslim Brotherhood?