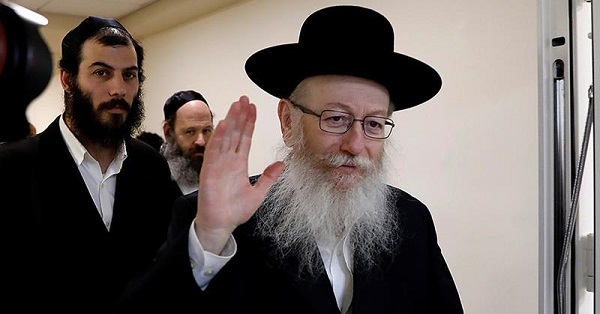 Quote of the day:
"On the one hand, the comic video clip of police cars in pursuit of a lone bicyclist in the Hayarkon Park, on the other hand, a funeral attended by hundreds of people which received police approval in Bnei Brak. Where are the brains, where?"
--Columnist Oded Shalom looks at how the police discriminate in their implementation of the isolation restrictions and don't use discretion in their treatment of Arabs.*
You Must Be Kidding:
"The Iranians have enough resources to deal with the global coronavirus pandemic."
--Israel Hayom's commentator Eldad Beck writes that Iranians aren't suffering enough to warrant easing US sanctions on them.**

Breaking News:
Israeli Health Minister Yaakov Litzman tested positive for COVID-19 Thursday, keeping Prime Minister Binyamin Netanyahu in self-quarantine, and putting the Mossad Chief, the head of the National Security Council, the Health Ministry director and the director of public health at the Health Ministry in quarantine, as well. The IDF Chief of Staff has already been in self-quarantine since Tuesday.  (Haaretz+ and Israel Hayom)
Front Page:
Haaretz
Yedioth Ahronoth
Maariv This Week (Hebrew links only)
Israel Hayom

Top News Summary:
As unemployed passed one million people and the number of people infected with corona jumped in the ultra-Orthodox city of Bnei Brak (where the Israeli army is now running the crisis) Israel took new drastic measures to fight corona in Israel: ordering hospitals to empty 80% of beds to make way for corona patients, preventing entry and exit from the corona-hit ultra-Orthodox city of Bnei Brak, requiring people to wear masks outside homes. It also decided to distribute 500 shekels to every minor and elderly person before Passover holiday next week (if Knesset approves).

Meanwhile, Kahol-Lavan and Likud continued to debate who would be Justice Minister and who would be the Knesset Speaker, while reports surfaced that a second official residence will be provided to the leader who is not serving in the rotation.

And in Jaffa, a riot broke out between Arab youth and police over police treatment of locals when a teen refused to identify himself. One older woman who intervened was knocked to the ground by police and received a head injury. Oded Shalom writes in Yedioth how improperly the police acted. Yedioth reporters quote locals, one explained: ”It's not cops, they're criminals. They don't talk. They hit first. This morning there was a riot between police and residents after a 16-year-old refused to identify himself. When a woman came to disperse the mess, she too was beaten. All of Jaffa is furious. We can't stand such a thing that the cops behave in such a way."

Elections 2020 / Netanyahu Indictment News:
The latest news in the negotiations between Kahol-Lavan and Likud to form a unity government is that a draft of the unity agreement permits funding for another official residence for the acting prime minister - at a time of great economic plight. In the Likud, they told Yedioth Hebrew it was not their demand, and in Kahol-Lavan they denied and said, ”Gantz will reside in Rosh Ha'ayin until he is appointed prime minister."

The far-right-wing Yamin party is upset at being sidelined along with its pro-annexation agenda. MK Ayelet Shaked said that "If annexation is not agreed upon within a month - the government has no right to exist.” Yedioth Hebrew reported that if Netanyahu breaks up the right-wing bloc, Yamina will promote a host of laws that should cause a rift between Likud and Kahol-Lavan. Among the proposals: Laws to increase the power of the legislature against the judicial system. Meanwhile, the Opposition list, Yesh Atid - Telem, also plans to cause a rift between Kahol-Lavan and Likud by promoting the bill that would prevent a defendant from serving as prime minister or minister and a bill to limit the tenure of a prime minister to only two consecutive terms. (Maariv)

Elections 2020/Netanyahu Indictment Commentary/Analysis:
Will the Defendant Appoint the Judges? (Haaretz Editorial) After Likud agreed to give the justice portfolio to Benny Gantz’s Kahol Lavan in the negotiations to form a governing coalition headed by Prime Minister Benjamin Netanyahu, a creeping erosion of Likud’s willingness to cede control of the judicial system set in. First the party announced that the portfolio would indeed go to Kahol Lavan, but Likud would have a role in choosing the justice minister. Now it’s seeking “partnership” in appointing the Justice Ministry controls, including both senior ministry officials and judges appointed by the Judicial Appointments Committee.
What are you in such a hurry to join? (Ariella Ringle Hoffman, Yedioth Hebrew) Amir Peretz, what are you in such a rush for? What burns you to join the Kahol-Lavan - Likud coalition? To do this even before an agreement is signed, even before its clauses are clear, in a situation where this whole romance could end as one big fiasco? I find no reasonable explanation for why this man, who took down the mythical mustache with a great ceremony while promising not to join Netanyahu's government, is doing it now. With urgency…It may not be a great pleasure to sit in the opposition and raise your hand in plenary votes that will lose its power against a coalition of 73 MKs - but that is exactly what is expected of you, to fight from there… You don’t need to be a political genius to understand what lies behind this move, what is hiding behind the blown-up texts about a critical emergency time for the citizens of the State of Israel. Peretz, I suppose, knows that this is probably his last term. Not because he has reached an age where it is impossible to start, but because all other possibilities are closing down. In the next election, the Labor Party will run in a new format that is difficult to predict today, but it can be said with confidence that Peretz will not be able to lead. This cannot be said about (Labor MK Itsik) Shmuli, for whom this move may turn out to be - faster than he estimated - a bad bargain, reminiscent of the foolish head dive by the one who nimbly leapt up descending stairs, Stav Shafir.
Gantz, preserve the democracy (Amir Fuchs, Haaretz Hebrew) The health emergency is expected to lead to the establishment of a national emergency government. Of course, this was the compromise of Benny Gantz and his party, who agreed to serve as minister under a prime minister with severe indictments, in opposition to the main flag they campaigned with in the election. But from now on, they have been demanded, without compromise, to assume the role of maintaining liberal democracy in Israel. Not just to prevent schemes of legislation that would destroy the rule of law such as the French law, amendments to the Immunity Law, or turning the role of Acting Prime Minister into a haven for defendants in government corruption. They must prevent greater danger: the threat posed at the gate of the justice system and the rule of law in general.
A Huge Disappointment': Gantz’s Double Dealing With Netanyahu Sends Israel’s Arab Voters Into Despair (Judy Maltz, Haaretz+) A minority center-left government headed by Kahol Lavan would have won key concessions for the Arab community, but the former army chief allegedly opted for 'the politics of contempt.’
Not everything has to do with blocs and mandates; during an emergency, capability is more important than ever (Lilach Sigan, Maariv) A personal example of concern for the state is to show proper priorities, and to demonstrate that you are giving up a great deal of your political demands. Personal example is certainly not about taking care of your make-up and your hair while you’re in isolation. [A jab at Netanyahu, who made a point of saying that he did that ahead of a press conference. - OH]
Netanyahu Is a Colossal Failure. But Against the Coronavirus, He Is All Israel Has (Eric H. Yoffie, Haaretz+) He has no real foreign policy achievements. He's presided over the near-collapse of Israel’s educational and health systems, even before coronavirus. But for the duration of this crisis - we're all stuck with him.