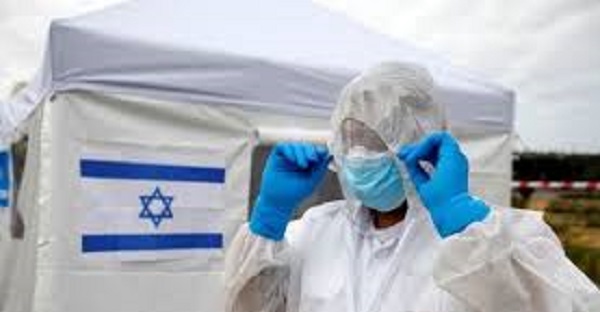 Quote of the day:
"At least the Arabs can be happy that they are the first people in history whose name begins with “non.”
--Haaretz commentator Odeh Bisharat reacts to how Israeli Prime Minister Binyamin Netanyahu referred to Israeli citizens who are not Jewish.*
You Must Be Kidding:
Israel detained two Palestinian Authority officials from E. Jerusalem, who were reportedly working to assist Palestinian residents as part of their response to the coronavirus pandemic.Yet, last week, Israel was fine to let Palestinian security forces enter the city to deal with armed clashes between Palestinian residents.**

Top News Summary:
Ultra-Orthodox and other cities put under siege, incitement directed towards ultra-Orthodox, and no progress made between Gantz and Netanyahu to form an emergency unity government - these were the top stories in today’s Hebrew newspapers.

Elections 2020 / Netanyahu Indictment News:
At the time of Kahol-Lavan leader Benny Gantz’s shocking move last week to join Israeli Prime Minister Binyamin Netanyahu in a unity government, it appeared that it was a done deal. But with everyday that passes, there are more impasses. Yedioth Hebrew’s Yuval Karni reported that “both sides are already openly talking about the possibility of the talks exploding.” The main sticking point now is the issue of annexation of parts or all of the West Bank with Kahol-Lavan opposing. Israel Hayom reported that Netanyahu has worked tirelessly over the last three years to get the Trump administration to agree annexation and refuses to give up on it. According to a Channel 13 News report on Saturday,  Gantz may be willing to accept the annexation of settlement blocs west of Israel's security barrier as a part of a peace initiative in full coordination with the Defense Ministry, which he will lead under a unity government. Such efforts would begin only after the coronavirus threat has ended, according to the report. According to the report, Gantz is sticking to his opposition to annexing the Jordan Valley, over worries that it could jeopardize the Israel-Jordan peace agreement, Israel Hayom wrote. Meanwhile, Gantz has informed President Reuven Rivlin that he may ask for a two-week extension to form a government. Rivlin said he would consider giving it to him. (Maariv)

Israel is placing eight cities and 15 Jerusalem neighborhoods under siege, the majority of them are of ultra-Orthodox Jews: no one can enter and no one can exit. Israel is also considering a full Passover Eve lockdown of the country to prevent people from going to their family for the feast. The IDF Chief of Staff asked Netanyahu to allow the IDF to manage the crisis because it constituted "war.” Troops have already been deployed to the ultra-Orthodox city of Bnei Brak, which is already under partial lockdown. Soldiers were given Yiddish dictionaries to communicate with locals. President Rivlin lamented the harsh recent statements made against the ultra-Orthodox public, following their high rates of corona infection. "The plague does not distinguish between ultra-Orthodox and secular,” he said. (Yedioth Hebrew) The Health Ministry deputy director said Israel would not be returning to normal after the Passover holiday and that resuming economic activity depended on tests to identify coronavirus antibodies in the blood.

Elections 2020/Netanyahu Indictment Commentary/Analysis:
Benny Gantz and his party members want to establish a national paralysis government (Haim Misgav, Maariv) Although the political world is about compromising, the Kahol-Lavan Chairman, in his brazen and nauseating demands, actually says he is doing a favor to the right-wing bloc by being willing to delegate his spirit to it.
Gantz, Have You No Red Lines at All? (Haaretz Editorial) There are several proofs of the fact that the term “national emergency government” is devoid of content. One is that Yaakov Litzman is staying on as health minister. Another is that the Kahol Lavan party didn’t demand “coronavirus portfolios” like the health and finance ministries. And here’s a third piece of evidence demonstrating that the pandemic is just a smokescreen for Prime Minister Benjamin Netanyahu: the fact that during Likud’s negotiations with Kahol Lavan over forming a government, the main dispute has been over the issue of annexation. The self-evident question is why, at the height of an unprecedented health crisis – at a time when the health system is on the brink of collapse, the education system is shut down, the population is in quarantine, the elderly are separated from their families, cities are under lockdown and more than a million Israelis have become unemployed – why, amid all this chaos, is Netanyahu, and presumably other sections of his right-wing bloc, primarily concerned with the issue of unilaterally annexing parts of the West Bank?
Gantz should save spots in the unity government seats for his former friends from Yesh Atid (Uriel Lin, Maariv) The opposition can provide us with statements and protests, but those who really strive to promote values in Israeli society should give up comfort and join the government, the world of action and implementation.
In the choice between values and deals - (Labor MKs) Peretz and Shmuli chose the latter (Eran Nissan, Maariv) When the possibility of them entering the government is in the air, the Labor MKs must remember that they should not drag the faction's respectable legacy into Netanyahu's mud.

Other Commentary/Analysis:
The closure will save us, in Gaza the closure will kill (Neve Gordon, The Nation and Haaretz Hebrew) Residents of the Gaza Strip will suffer not only from the natural complications caused by the virus, but also from the fact that the siege put upon them places them at a huge disadvantage in all three categories considered essential in the fight against the spread of the corona: health care, social conditions, and the possibility of physical distance…Israel, which continues to control Gaza’s borders, has for decades intentionally weakened the economy and health of the world’s largest open-air prison.
Responses to corona expose Arab world's fault lines (James Dorsey, Israel Hayom) The lesson of Egypt's, Pakistan's and China's initial handling of the coronavirus pandemic is that neither self-serving autocrats nor authoritarians have the wherewithal to confront a crisis like this in a timely fashion.
Who Needs Doctors When You Have an Army? (Raviv Drucker, Haaretz+) Allow me to present the real heroes of the war – starting with the head of the Mossad, who, by marvelous coincidence, encounters a television camera every time he leaves his office. Through a daring operation, he has managed to buy 500,000 coronavirus testing kits, respirators and 10 million surgical masks (where are they?). Fear not, Israel, Yossi Cohen is guarding you. And he isn’t alone. Soldiers from the elite Sayeret Matkal unit “bring stratagems, operational capabilities and resourcefulness to these missions,” to quote an article on the Ynet news site. The missions in question aren’t assassinating senior Hezbollah operatives, but merely obtaining reagents for coronavirus tests and locating patients whose tests have gotten lost. Almost as a matter of course, you ask yourself whether this is an army that has a public relations office or a public relations office that has an army.
*Netanyahu Doesn't See Arabs, Only 'non-Jews' (Odeh Bisharat, Haaretz+) The non-Arab prime minister, Benjamin Netanyahu, never misses an opportunity to prove how racist and petty he is, even during these days of deep crisis. During the huge fire in Haifa a few years ago, instead of exploiting the distress to forge civilian unity, he and his cohorts started to speak of arson terror by Arabs. To this day there has never been proof of any such “terror.” Now, when he addresses the citizenry, he is addressing the “Jews” and the “non-Jews.” At least the Arabs can be happy that they are the first people in history whose name begins with “non.” Meanwhile, the propaganda machine is working overtime. Even though all the indications show that the Arab population is exhibiting good citizenship, awareness and impressive discipline during this crisis – the mosques and churches are closed and no one is praying there secretly; no religious or societal leader came out against the official guidelines – every time someone mentions the serious situation in the ultra-Orthodox (Haredi) community, another hastens to ask: And what about the Arabs?” So this is the situation with the Arabs: According to MK Mtanes Shehadeh, chairman of the Knesset subcommittee on the coronavirus in the Arab community, the percentage of Arabs found to have been infected is very low, even after the recent wave of testing, and so is their percentage of patients in critical condition. My dear right-wingers, we are sorry for the disappointment we’ve caused you. What would you like us to do to raise morale in the state of the Jewish majority? Perhaps we should spray ourselves with coronavirus in order to please the crown prince, Yair ben Netanyahu (can we refer to him as YbN, the way people refer to MbS, the Saudi crown prince so beloved by the royal family here?). Netanyahu the son pushed the incitement another few steps forward and tweeted the photo of a demonstration from 2014 as if it was a news photo from Jaffa last week. “When are they locking down Jaffa?” asked the incited masses on social media? Bnei Brak is not alone.
Coronavirus, and Saudi Arabia, Force Moscow to Freeze Its Plans for Middle East Domination (Dmitriy Frolovskiy, Haaretz+) The coronavirus pandemic and the Kremlin’s battle with Saudi Arabia over oil prices are exposing both the vagueness and fragility of Putin’s ambitions in the Mideast, from Damascus to Tehran to Riyadh.
Coronavirus Could Threaten Qatar's World Cup Dreams (Zvi Bar'el, Haaretz+) The fate of the 2022 World Cup is a top concern for host country Qatar, but the failure to comply with coronavirus safety measures could spell trouble for the games
Why is this night different from all the other nights? This night we're all zooming (Dror Raphael, Maariv) Why is this night different from all the other nights? On all other nights we eat between guests and those being pampered - this night is all about deliveries. We were slaves to Pharaoh in Egypt. And the Prophet Moshe Bar Siman-Tov [Health Ministry Director - OH} arrived and removed us from liberty and put us in slavery and we were careful and we didn’t go farther than a hundred cubits from our homes. And even though we are all wise and we are all virologists and we all know medicine - we must tell of the spread of the corona through the small drop or through the button of the elevator and the cart of the supermarket, and all those who tell more that is commendable.