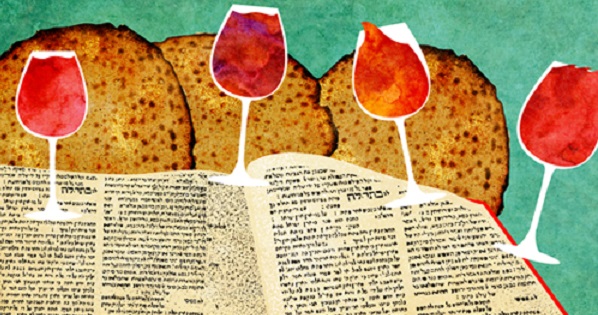 Quote of the day:
"I don't understand why I'm good enough to work in Israel, but not good enough for the Israelis to test me."
--A Palestinian worker at an Israeli chicken factory, which Palestinians point to as the source of West Bank coronavirus outbreak.*
Corona Craziness:
A lengthy unity government negotiation meeting between Kahol-Lavan leader Benny Gantz and israeli Prime Minister Binyamin Netanyahu took place this week between the Prime Minister's study and his patio. Gantz stood in the patio of the official residence, while Netanyahu remained in his study and the two leaders shouted to each other because Netanyahu is in quarantine.**

Double irony: On the holiday celebrating the Jewish people's liberation from slavery in Egypt and in a reverse of situations dating back to Israel's military rule over its Arab citizens, Jewish Israelis will be under curfew in their homes on Passover, while the country's Arab citizens will be free to move.***

Top News Summary:
Jewish Israelis will be under curfew over the Passover holiday and negotiations for a unity government got stuck again, however, the West Bank annexation dispute was resolved - to the satisfaction of the right-wing bloc.

Elections 2020 / Netanyahu Indictment News:
**Israeli Prime Minister Binyamin Netanyahu and Kahol-Lavan leader MK Benny Gantz met and negotiated (from a distance) on Monday and Gantz finally gave in to the Likud demands and agreed to annexation of parts of the West Bank, without Kahol-Lavan having veto power over it (Yedioth Hebrew reported), thus paving the way for a unity agreement. But then Likud demanded to renegotiate changes to the committee for the appointment of judges, even though Gantz already reportedly agreed that Likud could have veto power over the committee’s decisions. MaarivOnline reported today that Kahol-Lavan sources said that talks with the Likud broke off and now “the ball in their field.” Meanwhile, Kahol-Lavan and the Labor party are planning to merge. Earlier this week, the Labor party dissolved its union with the Meretz party this week. (Also Maariv)

In an interview with Maariv’s Ben Caspit, Yisrael Beiteinu chairman, MK Avigdor Lieberman, said that he will do everything to bring down Netanyahu. “This man, Binyamin Netanyahu, has nothing to do with the right,” Lieberman said. “He represents the absolute, purest, most basic opportunism. The right must be released from his grip. This is my historical mission. How to free the right-wing and return it to its core…The man is a false messiah. he is the Shabtai Zvi of the right-wing. Instead of revisionism, he brought opportunism.”

***In the strictest measures taken until now, Israeli Prime Minister Binyamin Netanyahu announced yesterday that from 7PM Tuesday until 7AM Friday no one can leave their village, town or city and starting at 3PM Wednesday until Thursday morning, the Jews in the country will be under curfew, confined to their homes, so as to prevent them from spending the Passover feast outside their homes. The government approved the emergency measures Tuesday morning. The restrictions don't apply to non-Jewish majority communities. And if the drop in the rate of infection continues, Netanyahu said Israelis "will be able to gradually go out after Passover."

Elections 2020/Netanyahu Indictment Commentary/Analysis:
Netanyahu's Annexation Ploy Sacrifices Israel's War on Coronavirus to the Idol of Settlements (Chemi Shalev, Haaretz+) Just when it will need U.S. and world's goodwill more than ever, Jerusalem is set to spit in their faces.
Gantz needs to remember: unity is the necessity of the hour - and imposing sovereignty is even more so (Eli Vered Cantor, Maariv) According to reports, the delays in coalition negotiations are over the Kahol-Lavan chairman's opposition to the issue of sovereignty [over the West Bank -OH]. If he put the matter to a vote in the Knesset - he would find that he would receive votes from the right and also from within his party.
Israel's Right-wing Annexationists: Beware the Wrath of Trump (Jonathan S. Tobin, Haaretz+) Israel's right-wingers and religious nationalists are hurrying to change West Bank facts on the ground because they're betting Trump is distracted by coronavirus now and loses in the fall. They're playing with fire.
Netanyahu's one-time cash grant doesn’t really address coronavirus crisis (Sami Peretz, Haaretz+) It’s a populist measure when Israel should be thinking about giving regular basic income to the neediest.

Other Commentary/Analysis:
Netanyahu Is Handling the Coronavirus Crisis Like a Sole Ruler (Haaretz Editorial) But common sense isn’t relevant when decisions are made by Netanyahu over the head of the Finance Ministry, and without consulting with any ministry officials. The prime minister simply decided that he felt like handing out a 2 billion shekel Passover grant to be paid to every child and elderly person, presumably believing that the hollow and populist gesture would improve his image, or score him points with voters in the ultra-Orthodox community.
Anything but a state commission of inquiry (Dan Schueftan, Israel Hayom) Professional bodies should examine the performance of the government, health, and financial systems. But jurists tend to look at procedural issues or market their worldviews – overlooking the national costs of preparing for the majority of extreme scenarios, which would paralyze the country.
Passover Curfew Is a Sign It’s All Political in Israel, Even the Coronavirus Pandemic (Amos Harel, Haaretz+) Netanyahu and his health minister ignore experts' view, while a rather helpful army won't be assuming responsibility for coronavirus fight, not as long as Bennett remains defense minister.
Cry for the people of Bnei Brak, whose leaders let them down (Sari Makover-Belikov, Yedioth/Ynet) The officials running the ultra-Orthodox city betrayed their community by blocking them from vital information, ignoring practical problems of maintaining quarantine and themselves violating Health Ministry restrictions.
Virus, shmirus, let's focus on the Palestinians (Stephen M. Flatow, Israel Hayom) Talk about tone-deaf! Completely oblivious to the suffering of American citizens, J Street's top priority is to give American money to two of the most vicious America-hating regimes in the world.
The threatening corona and turbulent politics lead us to a holiday without freedom (Yossi Ahimeir, Maariv) On this sad and strange Passover holiday, where life is like being put under arrest, we wish for the next year to be free, healthy, and blessed with a stable government and that we enjoy a spring without corona.
Pro-Palestinian, Without the Corbynist Kneejerk anti-Zionism and anti-Semitism: Meet Labour’s Intriguing New Foreign Secretary (Colin Shindler, Haaretz+) Lisa Nandy disentangles pro-Palestinian views from disdain for Jews. That may seem unremarkable in other contexts, but not for UK Labour, emerging from its hyperfactional, toxic and electorally disastrous Corbyn era.