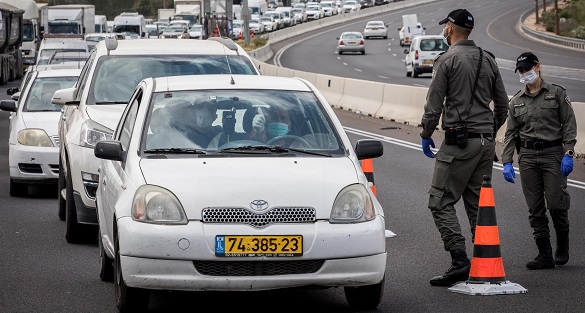 Tel-Aviv marijuana dealers are dressing up in food delivery outfits so they can bypass the health guidelines that prevent people from going more than 100 meters from their homes except to buy food or for essential needs.**

Top News Summary:
President Reuven Rivlin rejected Kahol-Lavan leader Benny Gantz’s request for a two-week extension to form a government and gave him till Monday night at midnight (UPDATE: he extended it to Wednesday), Israel discussed  corona exit plans even as it put 17 neighborhoods in Jerusalem under lockdown and the former chief Sephardi Rabbi Eliyahu Bakshi-Doron died of coronavirus making top stories in today’s Hebrew newspapers.

Elections 2020 / Netanyahu Indictment News:
After President Rivlin rejected Gantz’s request for more time and gave him till Monday night midnight to form a government, the Likud and the Kahol-Lavan negotiating teams scrambled to see if they could iron out their major stumbling block: Netanyahu’s additional request for Likud to have more influence on the committee that selects High Court justices, something that Gantz rejected outright, saying it would harm democracy. UPDATE: Monday night, with only a few hours to go, Gantz gave a press conference where he called on Netanyahu to agree to a unity government, meaning that they had not reached one. Shortly afterward, Netanyahu responded, saying: “Benny come to Jerusalem let’s sign a deal tonight.” The two are presently meeting. Rivlin gave the two leaders till Wednesday. If they don’t agree on one, Rivlin will give the Knesset the mandate to form a government and if 61 members of Knesset cannot agree on one person to be given the mandate to form a government, Israel will go to fourth elections.

Rivlin made his decision to reject Gantz’s original request for more time after he made some calls. Gantz had said he was close to an agreement, but Netanyahu said they were not. The right-wing bloc was angry that Rivlin did not pass the mandate to Netanyahu. But Rivlin also contacted the two right-wing members of the Telem party, who said they did not support a coalition government backed by the mostly Arab Joint List faction. Rivlin asked them, MK Yoaz Hendel and MK Tzvi Hauser, if they would support giving the mandate to Netanyahu. They said no, they would not be a part of a narrow coalition government led by Netanyahu. (Ynet Hebrew) And Labor leaders Amir Peretz and Itsik Shmuli conveyed similar messages, despite Likud attempts to convince them otherwise. Netanyahu’s right-wing bloc has 58 seats. It got one more from Gesher party chairwoman MK Orly Levi-Abekasis, who broke off her alliance with the Labor and Meretz parties and expressed her support for Netanyahu to form a government. (Maariv) But Netanyahu lacked two more seats to reach the 61 needed to form a government.

Meanwhile, Moshe (Bugi) Yaalon, head of the Telem party, which was formally part of Kahol-Lavan, urged Gantz to cut off unity government talks and rebuild Kahol-Lavan. Members of the Yesh Atid-Telem faction also appealed to Kahol-Lavan MKs, urging them to advance the legislation that would prevent Netanyahu from being prime minister again and which they had pledged to do before Gantz made an about face and tried to join Netanyahu in an emergency unity government. Yedioth Hebrew writes that the transfer of the mandate to the Knesset will allow Kahol-Lavan to control the agenda through the Knesset Committe. One of the proposed laws is to prohibit an indicted MK from forming a government.

Yesterday, the High Court dismissed a petition filed by 117 public figures, including former defense ministers, who demanded that the High Court make that ruling to prohibit Netanyahu from receiving a mandate to form a government in light of the criminal indictments for offenses of moral turpitude which he faces in Cases 100, 2000 and 4000. (Maariv) The court said the filing was premature because Netanyahu had not received the mandate. Haaretz reported that Netanyahu’s immediate concern was that the High Court will indeed rule to prevent him, if he does get the mandate.

Israel put a full closure on 17 coronavirus-hit Jerusalem neighborhoods, while it made plans to gradually lift the general closure on the country, but the start date has yet to be set. Special plans are being discussed to return children to schools, such as having children study in school gyms or classes divided so that half the children study three days a week and the other half study three other days. On home days children will do distance learning.

Hamas Proposes Exchanging Information on Israelis in Gaza for Prisoners' Release - Officials in Gaza say Hamas may convey updates on Israeli captives and bodies in Gaza if Israel is ready to release a round of old and sick Palestinian prisoners to advance efforts to retrieves missing Israelis, remains of IDF soldiers - as a first step in a possible broader deal. The Kuwaiti newspaper Al-Jarida quoted sources Sunday as saying that Israel had agreed to release "all prisoners under the age of 18 and all women", and all that is left is to discuss the number of older prisoners to be released. The source added that "Hamas has agreed to release the two Israeli civilians and to transfer the body of a soldier held there since 2014, and to convey information regarding the fate of a second soldier that the organization did not reveal details about him.”
(Haaretz+, Maariv and Israel Hayom)
Twelve were arrested on suspicion of involvement in a shooting incident in Rahat during which two police officers were injured - A preliminary investigation indicates that this is a land dispute. The cops rescued themselves in the shooting, and two were injured and needed medical attention. Several suspects have been arrested, including the son of a well-known figure in the city. The exceptional event revealed a "problem-in-problem": the sharp scourge of crime and violence in Arab society, which continued even in the corona period, alongside the plight of Bedouin society in the south, which long neglect and little governance created a void filled by tribal and criminal forces. (Maariv)
Elbit wins $20M Latin American drone upgrade deal - Defense electronics giant to integrate satellite communication systems and automatic takeoff and landing systems into the Hermes 900 unmanned aerial vehicle its clients are already operating. (Israel Hayom)

Elections 2020/Netanyahu Indictment Commentary/Analysis:
As if Coronavirus Wasn’t Enough, Israel’s Constitutional Contagion Is Out of Control as Well (Chemi Shalev, Haaretz+) President Rivlin refuses to extend Gantz’s mandate or hand it over to Netanyahu, plunging politics into mayhem.
Rivlin will have to call on Netanyahu (Mati Tuchfeld, Israel Hayom) It is unclear why the president rushed to announce that if Gantz fails to form a government, the mandate will be handed to the Knesset.
The question of the legitimacy of the Arab parties in Israeli society is here to stay (Meir Uziel, Maariv) The opposition to a coalition alliance with the Joint List cannot be considered a racist opinion, but rather as a war against racists. This is what history teaches us, but that is often forgotten in our area of the world.