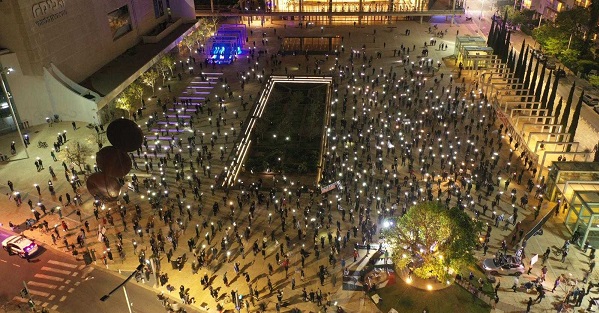 Quotes of the Day:
“I felt like I was making the connection even stronger, that I was a part of the place, of the people, of the tradition."
--Dr. Abed Zahalka, an Arab-Israeli doctor working for years in an ultra-Orthodox hospital in Bnei Brak, said after he carried a Torah scroll wrapped in a tallit (Jewish prayer shawl) into the coronavirus ward and gave it to the infected and isolated religious patients there, who, with great joy, immediately began to pray.*

“The road to reconciliation requires people of vision, not petty quibblers who measure every movement toward peace in fractions of millimeters, until the journey turns into one of torture rather than peace.”
—Haaretz commentator Odeh Bisharat suggests Israel think outside the box to reach peace with the Palestinians by releasing all Palestinian prisoners at once.**
Front Page:
Haaretz


Top News Summary:
Corona and Holocaust Remembrance Day, corona and the complaints of parents about distance teaching and corona and the collapsing of small businesses were today’s top stories in the Hebrew newspapers. Meanwhile, no known progress on the negotiation for a unity government front, but at Tel-Aviv’s Rabin Square a couple thousand people protested against damage to Israel’s democracy.

Israel will be marking Holocaust Remembrance Day online and it will hold the national memorial ceremony without an audience and though restrictions on people are being eased, Holocaust survivors living in Israel will mostly be at home, because of the risk of them being infected with coronavirus. The papers also shared the difficult stories of small business owners, with a falafel stand owner named Yuval Carmi making headlines after a heart-wrenching interview he gave to Channel 13 News, in which, sobbing, he said that he can no longer feed his children. Afterward, dozens of people offered to give him money, but he refused, saying he just wanted to sell his falafel.

Elections 2020 / Netanyahu Indictment News:
Between one thousand and ‘thousands’ of Israelis rallied against what they called the “assault on democracy.”  Former Kahol-Lavan MK Yair Lapid slammed Kahol-Lavan Chairman Benny Gantz, accusing him of deception, while another leading former Kahol-Lavan MK, Moshe Ya'alon, urged Gantz to cut talks with Netanyahu and return to the fold of those who oppose a government with Netanyahu, who faces three indictments for crimes of moral turpitude.

Earlier, Likud negotiators warned Kahol-Lavan that if Gantz, who is Knesset Speaker, tables the legislation aimed at preventing Prime Minister Binyamin Netanyahu from serving as premier, it will result in the immediate termination of the coalition talks. At the rally of the black flags, Maj. Gen. Amiram Levine told how he saved Netanyahu’s life when they both served in the Sayeret Matkal commando. Later, in a 103FM radio interview, Levine said, ”Netanyahu has run his course, his adulthood shames his youth.” Levine, who was Netanyahu’s commander in the army, claims that the prime minister is harming himself, not just the state: "Democracy cannot be destroyed in order to save Bibi." (Maariv)

UPDATE: Today Netanyahu and Gantz met at the Prime Minister’s Residence and after two hours, talks blew up and Gantz walked out, apparently because he still would not agree to Netanyahu’s demand to reshuffle the High Court judicial appointments committee, a change which would give Netanyahu more influence on it.

Elections 2020/Netanyahu Indictment Commentary/Analysis:
Netanyahu Has Decided Who Will Take the Blame for the Coronavirus Crisis (Anshel Pfeffer, Haaretz+) Netanyahu's usual scapegoats have made it difficult to pin the coronavirus fallout on them, and he's unlikely to jeopardize his ultra-Orthodox support – so he's chosen someone else to take the fall this time.
The future of Blue & White is not necessarily black (Yuval Diskin, Yedioth/Ynet) While party the and its leader effectively betrayed all those who supported them by allying with Netanyahu, they could still save face attempting to unite the blocs against the man who dragged us into three elections out of fear.
Prepare for Netanyahu's Bribery Trial (Haaretz Editorial) Israel's courts must resume full operation immediately, even if this isn’t in keeping with the interests of the accused from Balfour Street.
Where is the stateliness? Rivlin acted like the neighborhood bully when he refused to give Netanyahu the mandate to form a government (Haim Misgav. Maariv) I long for the presidents who followed Weizmann, precisely these days as the president of the state marches toward districts he should not be in, exceeding his position.
Netanyahu Has Good Reason to Fear Democracy Defending Itself (Nurit Elstein, Haaretz+) Mr. Prime Minister…Let’s speak frankly. You haven’t really been dealing with the coronavirus pandemic. Staying in office is the only thing that you’ve been busy with. You should therefore realize that no legal model will provide you with complete protection or, as long as Israel is a democracy, grant legitimacy to a matter that’s fundamentally crooked. Ensuring that you can remain prime minister despite the indictments would require you to extinguish democracy entirely….The violence, lies and tactics that you have used to obtain a single benefit – escaping justice by staying in power – have turned you into a very dangerous person for the country. An unrestrained thirst for power and your willingness to use your authority for an inappropriate personal purpose to escape justice are a dangerous recipe for Israel’s existence as a democracy. They put you in the shoes of other leaders who have dragged their countries to the threshold of dictatorship…That, Mr. Netanyahu, is the reason that the High Court of Justice must stop you…

Other Commentary/Analysis:
Israelis Have Left the Coronavirus Lockdown Behind, and There Is No Going Back (Amos Harel, Haaretz+) They leave two groups at risk of complications from the coronavirus in the lurch – those 67 and over and those with underlying conditions.
The Mossad Is Flaunting Too Much During the Coronavirus Crisis (Yossi Melman, Haaretz+) Contrary to the flattering reports about the Mossad’s cloak-and-dagger operations to acquire medical equipment, most of it was purchased officially in Europe and China, where the organization has no particular advantage.
Why Do So Few Israelis With Coronavirus Symptoms Go Into Quarantine in Time? (Meirav Arlosoroff, Haaretz+) The Health Ministry’s cumbersome testing system takes far too long to deliver results..
**It's Time to Release Palestinian Prisoners (Odeh Bisharat, Haaretz+) Since the outbreak of the coronavirus pandemic, which has sent billions into isolation – and which in Israel and the Palestinian Authority was even imposed early on – the situation is forcing both sides to think differently. The Israeli army, instead of becoming even stronger, is assuming civilian tasks, like supporting citizens in Bnei Brak, Jerusalem and the (Arab-Israeli) Galilee village of Deir al-Asad. And in the besieged PA, the security services have become the ones offering humanitarian assistance. Slowly but surely we are beginning to realize that the world has changed. On one hand, humanity is facing a frightening pandemic, and there is fear that a wave of illness may flood us in the fall – and on the other, there is demand for fundamental change that will bring about a different social order, one whose main component is a reinforcement of the public health system. But above all there is the need to ensure, first and foremost, the health and welfare of our next-door neighbor. Because if our very distant neighbor (China, in our case) has infected the entire world, how much more must we be concerned about the health of the two neighbors in our region, who live next door to each other. It was actually the Hamas leadership that took the lead here. Its members understood the new situation, broke the accepted frameworks and proposed a prisoner exchange. They understood that in changing times there is a need for different tools. Today, if we want to think outside the box, the most effective step is a release of all the Palestinian prisoners. Without stages and without bargaining. The road to reconciliation requires people of vision, not petty quibblers who measure every movement toward peace in fractions of millimeters, until the journey turns into one of torture rather than peace. Imagine thousands of Palestinian prisoners returning to their homes. Wouldn’t that bring hope that something good will come of the coronavirus? And this time it would be good for both sides. The path to it lies outside the box.
Thomas Friedman's political fantasy (Jerold S. Auerbach, Israel Hayom) How could a three-time Pulitzer Prize winner, who served as Times Jerusalem Bureau Chief between 1984-88 and a columnist ever since, endorse Alexandria Ocasio-Cortez for anything but a kindergarten class on Israel and the Middle East?
Hezbollah Uses Coronavirus to Gain Political Capital (Zvi Bar'el, Haaretz+) ‘We’d rather die of coronavirus than hunger,’ protesters say as the Lebanese pound plummets and they return to the streets.
Jews in Germany Don't Need Special Treatment Any More (David Ranan, Haaretz+)  Germany’s relationship with Jews and with Israel is understandably shaped by the Holocaust. But this has caused it to be ritualized, abnormal – and, sometimes, actively harmful.