Several Israeli peace and human rights organizations, including Peace Now, took part on Tuesday, June 22nd, in a Knesset event titled ‘After 54 years: Between Occupation and Apartheid,’ hosted by MK Aida Touma-Suleiman of the Joint List and MK Mossi Raz of Meretz.

The event ruffled feathers in Israel. Many were offended by the use of the term “Apartheid” to depict the reality in the West Bank under Israeli occupation. Avner Gvaryahu, the executive director of Breaking the Silence, addressed these sentiments in the following speech, translated from Hebrew by APN:

I understand that a lot of people are bothered by the talk of apartheid. The link between our policies in the territories and the historical crime that took place in South Africa infuriates them. No matter that apartheid is a term in international law, the comparison is still there, they are hard to digest. So let's put the term aside for a moment. For a moment. It is in Afrikaans anyway. Let's talk about separation, or hafrada in Hebrew. Try it for a moment. It rolls on the tongue, doesn’t it?

Does anyone not think that there is a separation-based regime in the territories? Does anyone know that Israel maintains a complex and sophisticated system for creating a separation between Israelis and Palestinians? We have been there for 54 years. Does anyone really need more proof that there are laws for Palestinians and laws for Israelis? Does anyone need statistics on how many building permits Palestinians receive and how many demolition orders? On the number of outposts that flourish like poisonous mushrooms after the rain, with the enthusiastic encouragement of MKs from the coalition and the opposition, with the security of the army, with the help of regional councils, with the financing of my tax money?

Is there anyone who does not know all this? Well, of course. The land is filled with those who are either  voluntarily blind or blind by default, those whose wink-of-the-eye got stuck, and those who do not know how to ask; The land is filled with politicians who talk about "Palestinian takeover of Area C" while sending bulldozers to destroy [Palestinian] water wells and roads at the South Hebron Hills; It’s filled with pundits who talk about "law enforcement" reporting live from the festivals in the illegal outpost of Evyatar.

You are not fooling anyone. You can’t hide this system. You can’t obscure its basic principles, its foundational rationale, which lies at its root. Maybe because the separation policies that are unique to us cannot be carried out without soldiers. And they, perhaps by mistake, were sent out with a heart and with eyes, with mouth and with a memory, and they know very well what was required of them to carry out their mission. They know what mission they were sent to serve, and they know it is not temporary.

"Temporary occupation" is an agreed-upon lie, which has accompanied us for too many years. After 54 years it is time to face the reality that we are advancing. Every year, our temporary occupation takes the lives of Israelis and Palestinians who are much younger than it. The 15-year-olds in the Gaza Strip, as Amira Hass recently mentioned, have been through four wars, "but most of them do not know what a mountain looks and feels like." Tell them the occupation is temporary. Tell it to the children of Gaza or Sderot. Tell that to the soldiers who are now guarding the Evyatar outpost or dozens similar to it, which surely are built for only one second, just until we reach an agreement – sure, sure – we’ll just reach an agreement and then we go.

We are not fooling anyone, not even ourselves. It is not in the name of equality that we put Palestinians in administrative detention, nor in the name of democracy that we disperse demonstrations with live ammunition. We do this in the name of separation. A word of our own, in our own Hebrew, a language we have awakened from a nap in our own country. And we have become so good at this separation that we have no idea even what it entails.

Separation in Afrikaans is apartheid. It is time to face the reality we have created and bring an end to the occupation as soon as possible. 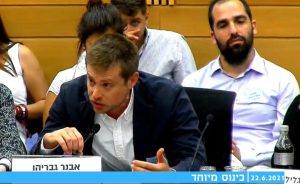