We are excited to introduce ourselves as proud new members of APN’s Board of Directors.

We’ve joined this board because we are progressive, we are proactive, and we are not willing to give up. And as you think about your year-end giving, we are stepping right in to remind you about how important APN’s progressive voice is in the world today.

As 2021 comes to a close, it’s important to take a moment to acknowledge the hard-won successes of this year. Amidst a sea of misinformation, voter suppression, and ultimately, violence, a new administration was still inaugurated here in the US. After four elections in two years, Israel turned the page of its political history, moving past the Netanyahu era and forming a government that, however imperfect, includes progressive Jewish parties and, for the first time, an Arab party government minister.

But it has also been a hard year for progressives. For those of us who care deeply about the social issues that frame every aspect of our American democracy—voting rights, racial equity, economic injustice, gun violence prevention, reproductive choice, and climate change, among multiple other concerns—it’s been a year of struggle, with little progress. It’s been a year of aspiration, with little actualization. It’s been a year of challenge, with a lot of frustration.

It’s almost enough to make you give up. But we don’t. We won’t. And you shouldn’t either!

Your support of APN puts you (and us) front and center in the progressive conversation. It enables us to speak up for peace for Israel and Palestine, and also to be an effective voice in the struggles of the progressive movement.

As we move through the darkest days of the year, we are grateful for the lights that lift our spirits and remind us of the power it takes to fight for a cause in which you believe. Please make a gift to APN this year, and create light in the darkness.

Like you, we support APN because we care about both what happens here in the US, and what happens in Israel and Palestine. We watched over the years as Israel’s right wing governments slowly but surely eroded the tenets of democracy, undermining equality and the rule of law and disempowering any advocacy on behalf of social justice. Recently we saw that government’s decision to declare six Palestinian civil society organizations “terrorist organizations”.

This happened at the same time that Palestinians—seeking only to harvest their olive crops—were being physically attacked by settlers intent on destroying their livelihood and pushing them off the land.

Most of this goes unnoticed and unremarked upon, particularly by American political leaders. That is why, now more than ever, we need to join together and raise our voices.

Even with new governments in both countries, progress on peace, or even undoing the damage of the past administration, has been slow to come. The Biden administration has made it clear by its relative inaction that there is a long way to go before Israel-Palestine reaches the top of its agenda.

And we also are seeing legislative efforts to silence those who voice legitimate criticism of Israel and its occupation. In response to Ben and Jerry’s decision this past summer to cease operations in the West Bank, a slew of state-level anti-boycott laws have been activated to penalize the company for their completely legal (and morally correct) anti-occupation stance, disregarding their first amendment rights.

And on the federal level, Senator Marco Rubio (R-FL) introduced an absurd bill called the Mind Your Own Business Act, which would “enable shareholders to hold woke corporations accountable.” The legislation would require corporate directors to prove their “woke” corporate actions were in their shareholders’ best interest in order to avoid liability for breach of fiduciary duty in shareholder litigation over corporate actions relating to certain social policies.

This is clearly a response to the Ben & Jerry’s decision. Making it possible for individual shareholders to sue corporate entities if the corporate policy conflicts with what the shareholder perceives as the placement of social justice over shareholders’ interest is part of a widely-accepted conservative intention to pierce and destroy “woke” think.

What’s more, by attacking Ben & Jerry’s, Rubio is going after a legitimate action and criticism of the occupation. In doing so, he quite intentionally places all conversation about ending the 50+ year occupation at risk. These laws are the tip of the spear of a coordinated conservative effort to censor and stifle progressive free speech. And Israel is being placed squarely in the center of the argument.

Thankfully, Americans for Peace Now has pushed back against every attempt to implement such unjust legislation.

Now that the right-wing has seen the success of anti-boycott campaigns, they are replicating this model and using it as a blueprint to penalize progressive ideology and political beliefs across the board.

This is clearly the beginning (or perhaps the next step) of an organized, politically-sanctioned and perpetrated attack on progressive values. It is already affecting many issues beyond Israel-Palestine—gun violence prevention, voting rights, abortion rights, immigration, climate change. All of these and more are included in Rubio’s sham of a bill.

The implications of the “pro-Israel” anti-boycott laws are now incredibly clear. They are a test-ground for future right-wing attacks against progressive values. We must demonstrate that these laws will fail.

APN is at the forefront of this fight. We are fighting against every attempt to implement anti-boycott laws on the state level and we are leading the charge against efforts to pass similar laws federally.

But we can’t do it alone. We need you with us. We need your voice, your power, and yes, your support.

Please make your year-end gift to APN now. We are working together with leaders in our community, as well as policy makers and our partners in Israel to bring light to the darkness. With your support, we are lighting the path to peace.

Please make a gift to APN today to help us in our work to end the occupation and to bring about a brighter chapter in the history of Israel-Palestine.

As we move towards a new year, our hope is that all of the progressive issues that we care about here and in Israel will be supported, safeguarded, and held. We want to see a better future for our community and our friends and family in Israel-Palestine.

Your support today will help APN hold back the onslaught of inane legislative actions like the anti- boycott law and uphold the right for critical conversation about Israel. We cannot be silent. We cannot be complacent. Our opponents definitely are not.

We both care deeply about Israel, and we are grateful to have the chance to be a part of APN and to add our voices to its work.

And we are grateful to you for your support—thank you for making a gift to APN today. We are excited to begin our work together on the APN board—and with you. Together, we can work to shine a light on the road to peace. 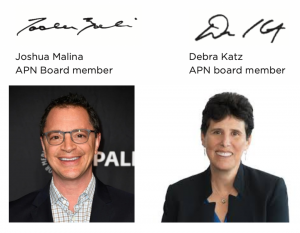