Peace Now's Protest at the Illegal Outpost of Homesh

Turning the tables on the settlement enterprise, Peace Now and its partner organizations hired a bulldozer – one of the symbols of the occupation and the settlement project – to dismantle the outpost of Homesh in the northern West Bank.

The landmark protest took place on Saturday. It focused on Homesh, which was built on Palestinian land in violation of a 2005 Knesset law which specifically ordered its dismantling. In addition to the law forbidding Israelis from being in Homesh, a Supreme Court ruling allowed its Palestinian landowners to return to their land in 2013. 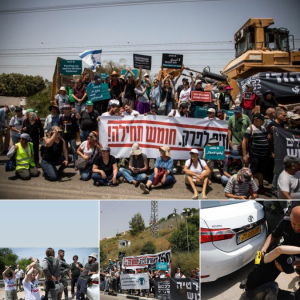 Despite the legislation and the Court ruling, settlers continue to reside there and even opened a yeshiva, a religious seminary, in Homesh. Meanwhile, the Palestinian landowners are denied or restricted access to their private property. Underscoring the severity of the scandal, Israel’s Supreme Court described this situation as “a world turned upside down.”

Ahead of its May 28th protest, Peace Now hired a bulldozer to lead a procession of activists to Homesh. But before crossing the Green Line, the bulldozer drivers were arrested. A peace activist, who was followed by plain clothes police officers from his home, was also arrested, en route to the demonstration.

Ironically, the official cause for the arrest was this activist’s intent to breach the 2005 law, the very same law that he and his fellow activists are demanding be enforced on the settler squatters at Homesh.

Saturday’s protest was a landmark moment. Not only did it attract many activists willing to engage in non-violent civil disobedience against the occupation. It also brought together a large coalition of anti-occupation organizations, under the leadership of Peace Now. It was depicted as such in the Israeli and international media.

Peace Now’s Interim Executive Director Dana Mills called it “a moment of rejuvenation and re-energizing the peace camp,” and promised more determined action against the settlements and the occupation.